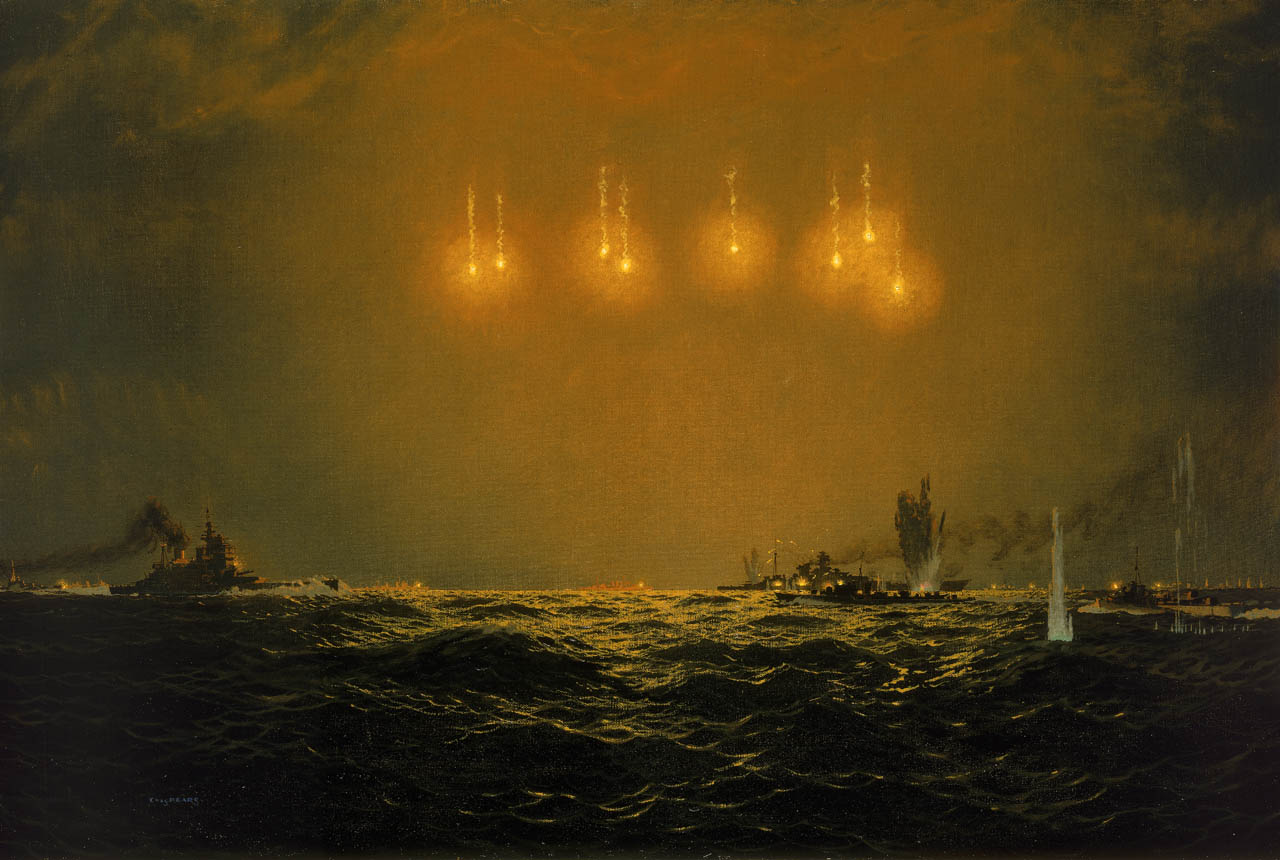 Sinking of the Scharnhorst, 26 December 1943

A representation of the sinking of the German battleship, 'Scharnhorst', created as an assignment for the War Artists' Advisory Committee. After she had made two unsuccessful attempts to attack a convoy under Rear-Admiral Robert Burnett, the German battleship 'Scharnhorst' was intercepted by Admiral Sir Bruce Fraser in the 'Duke of York'. Following a running fight lasting about three hours, she was finally stopped, surrounded and sunk.

On 23 December 1943 convoy RA55A left the Kola inlet in northern Russia for Britain, with an escort of ten destroyers. Also covering the convoy and the Russia-bound convoy JW55B, was Burnett in the 'Sheffield', with two other cruisers, 'Belfast' and 'Norfolk'. At the same time the battleship 'Duke of York', with the Commander-in-Chief, Home Fleet, Sir Bruce Fraser, sailed from Iceland in company with the cruiser 'Jamaica'. While the westbound convoy was undetected, the eastbound one was being shadowed by the Germans and Fraser believed that the 'Scharnhorst' would attack. Indeed she left Altenfiord at 2.00 pm on Christmas Day commanded by Rear-Admiral Bey and with a screen of five destroyers.

Aboard the 'Scharnhorst', apart from her crew, were forty cadets sent for training, bringing the total complement up to about two thousand. Heavy weather made it impossible for the German destroyers to keep up with the battle-cruiser, so she went alone. At 3.39 am on Boxing Day, Fraser learnt that the 'Scharnhorst' was probably at sea. At 72 degrees north in the depth of winter the action that followed was fought in the Arctic night. At 9.21 am Captain C. T. Addis of the 'Sheffield' reported the enemy at 13,000 yards. The 'Norfolk' scored at least one hit but the 'Scharnhorst' soon hauled away at 30 knots. At 12.21 pm the 'Sheffield' regained contact and in a brief action the 'Norfolk' had a turret knocked out by an 11-inch shell. Several hits were made on the 'Scharnhorst' but as she was steaming south towards Fraser and the 'Duke of York', Admiral Burnett decided just to shadow her. At 4.17 pm the 'Duke of York's' radar picked up the 'Scharnhorst' at 22 miles with the range closing rapidly. At 4.50 pm the 'Belfast' illuminated the enemy with star-shell, and when the range was 12,000 yards the 'Duke of York' and the 'Jamaica' opened fire.

A complicated action now ensued with the battleship, cruisers and destroyers all trying to close on their faster antagonist. At 5.24 pm Admiral Bey signalled 'am surrounded by heavy units' but he did temporarily shake off the 'Duke of York'. At about 6.50 pm the destroyer 'Scorpion' scored at least one torpedo hit and a little later the 'Savage' and the 'Saumarez' also scored hits. These so reduced the 'Scharnhorst's' speed that the 'Duke of York' was able to close again and pound her. At 7.30 pm she was almost stopped and Fraser ordered the cruisers to finish her off with torpedoes. She sank at about 7.45 pm and only thirty-six of her crew were found alive in the icy waters. There were no casualties aboard the 'Duke of York', though both her masts were shot through. It was the last attempt by the Germans to attack the British Arctic convoys with surface ships.

In this interpretation it is about 6.49 pm and the 'Scharnhorst' is in the right middle distance, in starboard-broadside view. Three shell bursts can be seen on her and a torpedo is exploding on her bow. This had come from the destroyer 'Scorpion', shown this side of the 'Scharnhorst', in port-broadside view and following the 'Sword'. On the left of the picture the 'Duke of York' steams in starboard-bow view, waves splashing as she moves through the water followed by the 'Jamaica'. Between them in the background are part of the 'Belfast' and ahead of her, in the middle background, the 'Sheffield' and 'Norfolk', firing. In the right background other ships firing include 'Savage' and 'Saumarez'. The ship in the distance in the centre is totally lit in profile on the skyline, other ships more in the foreground are darker silhouettes.

The painting, which is two-thirds sky, is lit by the eight star shells. These serve to highlight detailing on the ships and light up the sea immediately below the star burst. Shells are exploding in the foreground to the right, visible as splashes as they hit the water. Tracer fire is visible on the 'Scharnhorst', and smoke drifts upwards from both the 'Scharnhorst' and the 'Belfast' on the left. Despite the activity there is a stasis as if the whole scene has been frozen in time.

Charles Pears was employed during the Second World War to reconstruct notable maritime actions and events. Pears painted some fine war paintings characterized by a visually exciting style derived from his work as a poster designer. The War Artists' Advisory Committee was created at the start of WWII to establish an historical record of the war in all its aspects. There were three main categories: actions and events; documentary scenes of everyday life afloat and ashore and portraiture. The painting was presented by the War Artists' Committee in 1946, and it is signed 'Chas.Pears'.
Back to Search Results
Buy a print License an image
Share:
Link copied to your clipboard!