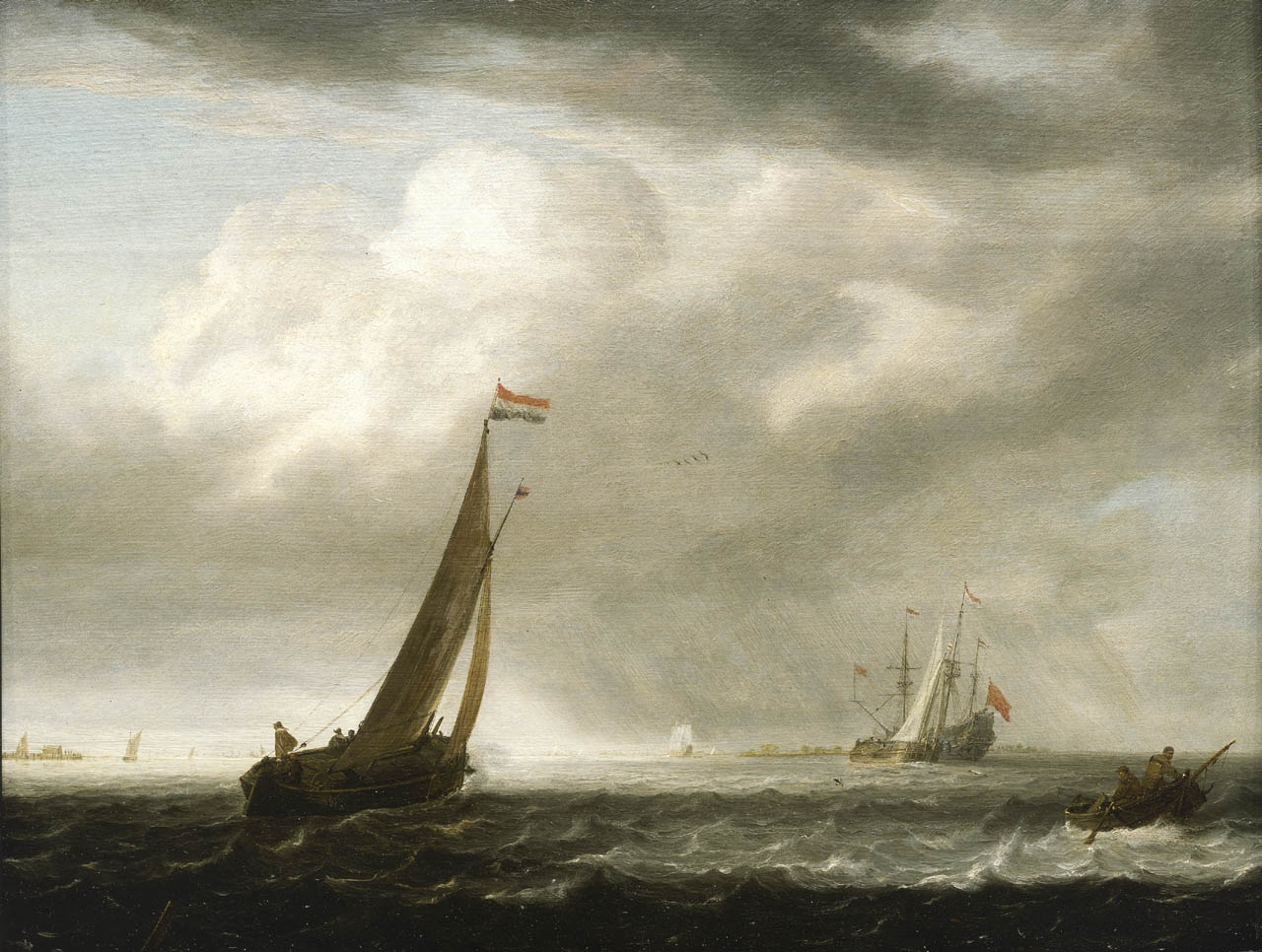 A Squally Day in a Dutch Estuary

Some shipping is shown in a Dutch estuary with land in the background on the right and the left. The land demonstrates the flatness of the topography. A kaag or ferry boat, in starboard-quarter view, is in the foreground on the left. It is flying the Dutch flag and the boat is pitched at an angle in the squall to enable the figures on board to be seen. There are three passengers in the ferry, a man wearing a hat with a feather stands in the stern and a couple is positioned in the centre. The two ships shown in the right distance are a smalschip in full sail, in starboard-bow view, and a warship at anchor behind. Both are flying the Dutch flag. In the foreground on the right a fishing boat in starboard-bow view, with two fishermen on board, negotiates the squall. The figure on the right looks out to meet the gaze of the viewer. Two-thirds of the painting is occupied by sky.

The artist has used light for dramatic effect, from the darkened centre of the squall in the left foreground to brilliant light in the background, where a ship in full sail is highlighted on the horizon. He has also exploited the grain of the wood panel on which the work is painted to enhance the effect of rain in the right background.

Born in Rotterdam, Simon de Vlieger was one of the important early painters in the emerging discipline of marine art. He was a member of the Delft Guild of Painters from 1634 and by 1638 was in Amsterdam. He settled in nearby Weesp and remained there for the rest of his life. De Vlieger decisively influenced the direction of Dutch marine art during the 1630s and 1640s. Significantly, as the pupil of Jan Porcellis and the master of Willem van de Velde the Younger, he provided a bridge between the second generation of Dutch marine painters and the third. He demonstrated his versatility and technical accomplishment by painting a wide variety of marine subjects and was also a sophisticated early exponent of the Dutch realist tradition. He moved away from a monochrome palette towards a silvery tonality and demonstrated a closely observed knowledge of shipping. He also painted figural representations for churches, genre scenes and landscapes, and was also an etcher. The painting is signed on the post, bottom left, 'S. De Vlieger'.
Back to Search Results
Buy a print License an image
Share:
Link copied to your clipboard!