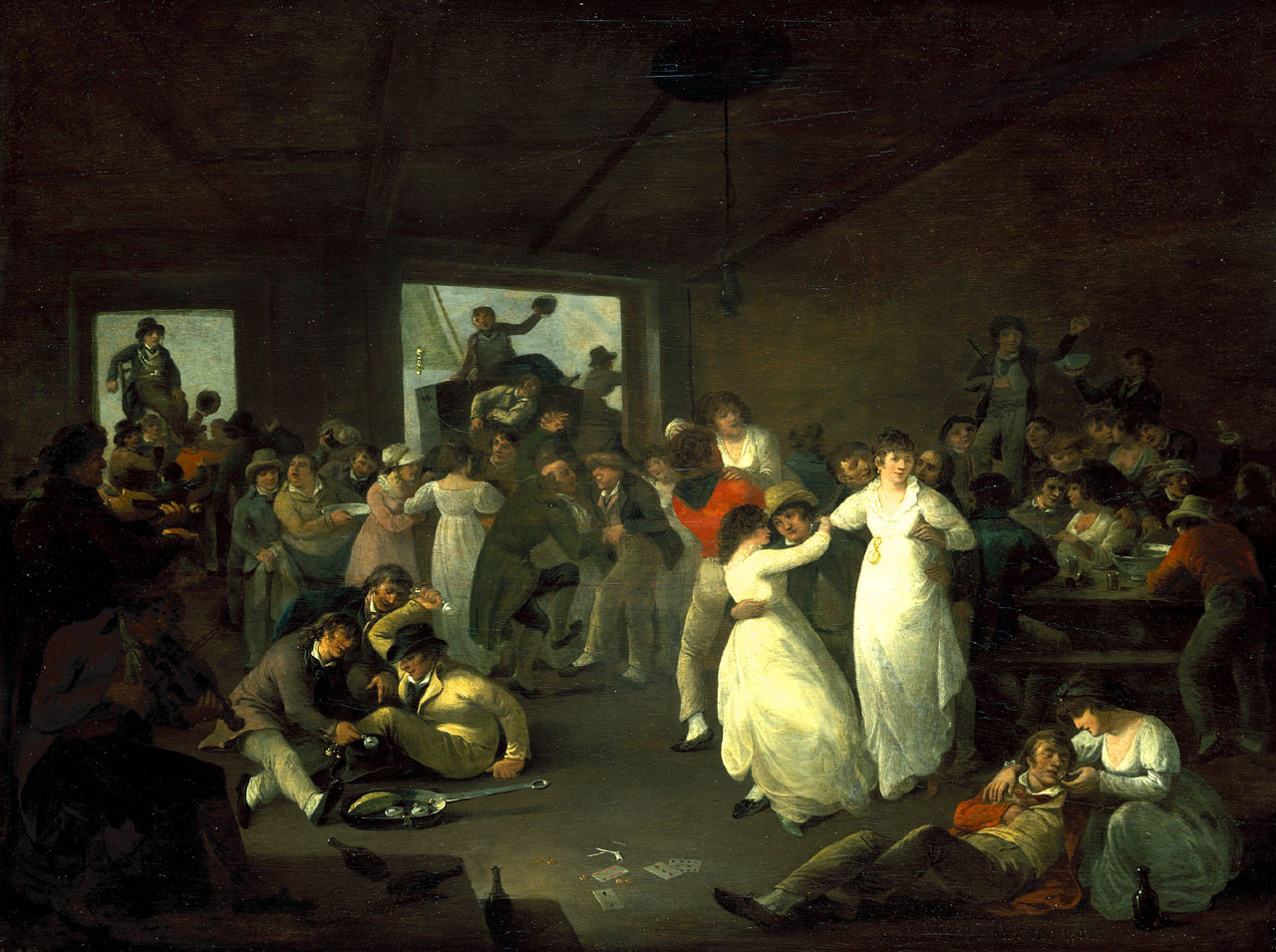 A scene in an unspecified tavern at Portsmouth after one or more ships have been paid off. The painting may be a retrospective celebration of the Battle of the Glorious First of June 1794 since, although executed much later and after Ibbetson had moved to the north of England, it reuses elements of a watercolour by him showing a similar scene and dated 3 July 1794.

The room is crowded with sailors and men and women carousing. The ceiling, floors and walls enclose the action and a single lamp hangs from the ceiling to the right. The outline of a carriage, with several revellers alighting or departing frames the door on the right. The opening to the left shows a seaman wearing a hat and chain, with a boatswain's whistle, borne aloft on a chair. Two bare-headed women are highlighted in the foreground: the one to the right has two men paying attention to her, and the woman on the left sits on a sailor's knee. Impropriety is implied in their conduct.

Although sailor's pay was low and often in arrears, prize money provided welcome bonuses after victorious actions, but it was rarely saved. The narrative indicates a group of three seamen in the foreground to the left of centre both pretending to fry their watches or play 'conkers' with them. This refers back to a celebrated incident in 1762 when, after capturing a Spanish galleon, seamen of the 'Active' and 'Favourite' were so loaded with prize money that they were recorded as frying watches, as shown. One of the women in the foreground wears a watch around her waist.

In the Dutch 17th-century tradition, the artist incorporates a still-life in the foreground, with a clay pipe, discarded playing cards showing each of the four suits, coins and bottles. Sailors, several with their arms around women, sit on low benches around a table to the right. This bears a china punch bowl and drinking mugs, with a sailor boy dancing on it. To its left, a group are dancing to the music of the two fiddlers on the far left. Some of the dancers are in couples and others are groups of men carousing (including a sailor dancing with a Jewish pedlar, a class well-known as purveyors of frippery to seamen). In the foreground on the right a woman attends to a sailor lying on the ground. An empty bottle to the right indicates that he has had too much to drink, and the young woman is attempting to revive him.

The painting, which hovers at the interface of celebration, disorder, chaos and disruption, was regarded as a fine example of Ibbetson's work in his own time. It was engraved as a mezzotint by William Ward RA in August 1807, with the title given here, and when sold at Christie's on 19 March 1808 fetched the highest price of the sale, an extraordinary £79. The catalogue on that occasion described it as 'Sailors Carousing, treated with infinite humour and spirit. The pencilling is delicate, and the colour clear and brilliant.' It has sometimes been called 'Sailors carousing in the long room at Portsmouth', which is indeed likely, but this appears to be a later conflation from a different image, though one possibly influenced by it; George Cruikshank's caricature of 'Sailors carousing, or a peep in the Long Room' of 1825 (see PAD0158). Many inns had 'long rooms' - a phrase simply describing their largest public space, but those shown by both artists are not identifiable. The painting is signed and dated October 1802.
Back to Search Results
Buy a print License an image
Share:
Link copied to your clipboard!