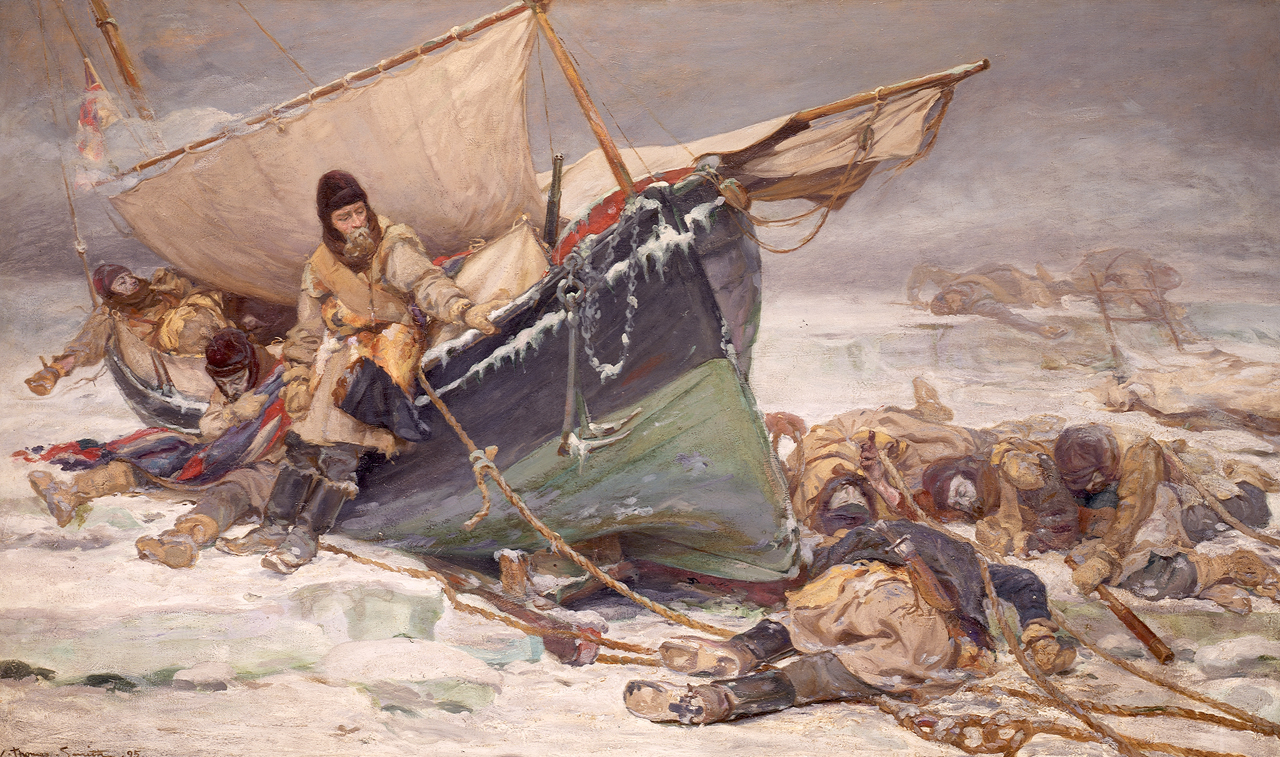 'They forged the last links with their lives': Sir John Franklin's men dying by their boat during the North-West Passage expedition

The original full title of this painting, under which it was first exhibited at the Royal Academy in 1895, is 'They forged the last link with their lives: HMS Erebus and Terror, 1849-50' (the dates being artist's guesswork). It was the first and apparently most dramatic of only four works that Smith exhibited there and is probably the best known of various paintings prompted by the fiftieth anniversary of the departure of Sir John Franklin's final and ill-fated Arctic expedition from Britain in 1845. The 'last links' in question refer to the claim that Franklin completed discovery of a formerly uncharted North-West Passage route through the Arctic archipelago, before Robert McClure did so in 1850 during his Franklin search from the Pacific side. This idea was promoted by Lady Franklin, based on the findings of the 'Fox' expedition of Francis Leopold McClintock: she was right in that Franklin had in effect done so by a different route, a fact not recognized until after McLure's success, and may himself not have confirmed it before his expedition perished leaving no discovered record of the fact. The actual origin of the phrase is attributed by Lady Franklin to Sir John Richardson, in a letter to Palmerston published in McClintock's 'The Voyage of the Fox' (1859). The painting itself is based on McClintock's find of a boat in Erebus Bay containing human remains. However, since he had also found documentary evidence that Franklin died in 1847, before the expedition abandoned its ships, the figures shown are all anonymous, including the apparent last survivor. It couls also be argued that this anonymous brotherhood of death adds to the impact of the composition, anticipating - although only with advantage of hindsight- the same commemorative instinct that led to the cult of the 'unknown soldier' to represent all those who died in the the First World War but without known graves. While this is Smith's best-known painting, he is an artist of whom little appears to be recorded and over whom there is some confusion. He seems to have been a historical and portrait painter exhibiting between 1890 and 1925 in various places in the UK, and the National Portrait Gallery (which has one portrait by him) gives his dates as 1865-1936. The confusion -often of their dates but also possibly of exhibition history- is with an apparently different man called William 'St Thomas' Smith: he was a landscape and marine painter born in Belfast, then with early and late-life Canadian connections, but who also worked in Britain, and whose dates were 1862-1947. This painting is signed 'W. Thomas Smith. 95' , lower left.
Back to Search Results
Buy a print License an image
Share:
Link copied to your clipboard!