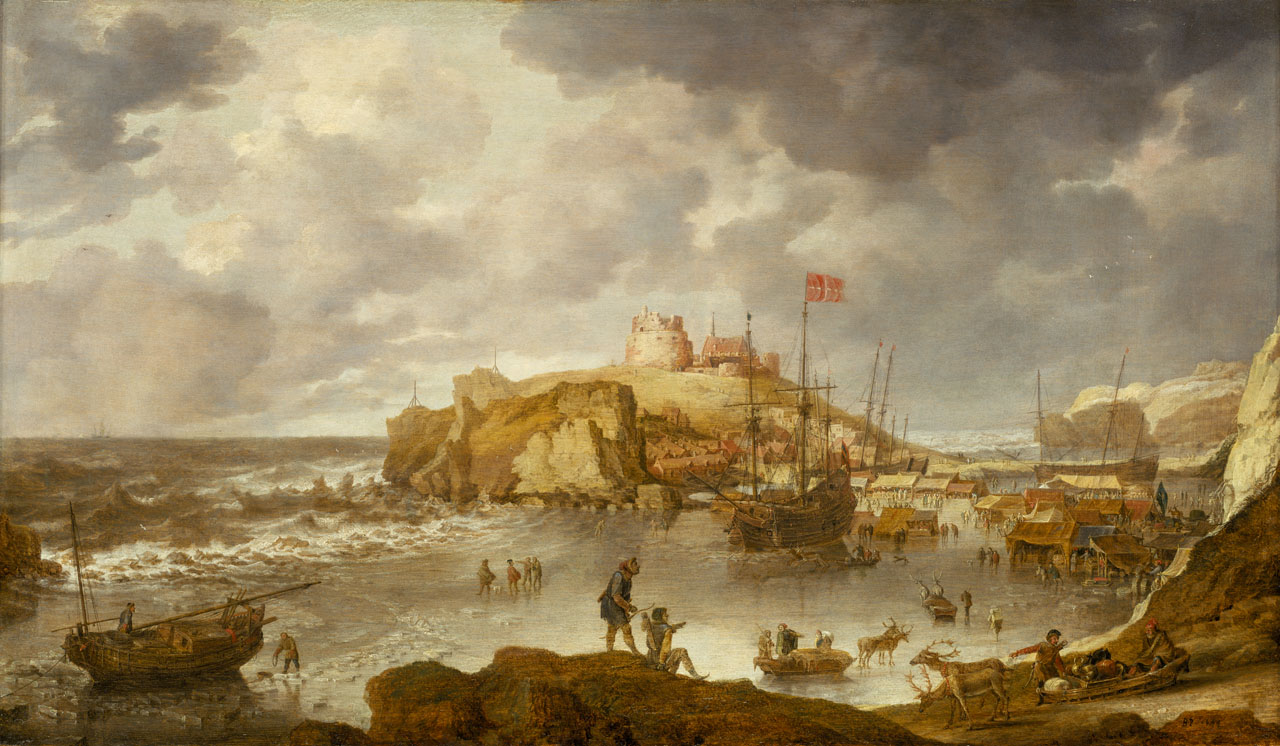 The Port of Archangel

This painting, by Bonaventura Peeters the Elder,e shows a dynamic and thriving harbour. Two hunters, wearing costumes which resemble those depicted in contemporary map illustrations, are prominently positioned on a ledge, in the foreground, which roughly mirrors the shape of the rugged headland behind them. Their sleigh conveys a variety of goods. One man gestures and seems to be inviting the viewer to gaze at the buoyant human activity taking place in the frozen bay on the right. Men are pulled on sleds along the icy ground by reindeer or elk. Whilst tiny figures are seen skating, conversing and at work. In the centre of the composition, a fortress and church stand atop a rocky headland. They are flanked by snow-capped mountains on the right and erratic waves are shown lapping against the rocks on the left. A small town lies on the slope below the fortress, from which the tents of a fair or market spill out across the ice of the bay, with ships frozen in both before and behind. The principal ship, in the centre, flies the Danish flag. The boat, in the lower left-hand corner, has been dragged ashore through the ice covering the bay.

The painting was in the collection of Sir Robert Witt as 'Winter at Archangel'. Like most of Peeters’ landscape pictures this vista is surveyed from an elevated viewpoint which affords a detailed panorama of the entire scene and creates an illusion of abundant spatial depth. Such a view heightens the compositional significance of the figures within the painting. Peeters frequently included terrain of some kind in his works. Characteristic of his work, too, is the representation of the sky: clouds are compact, dense, and range in colour from dazzling white to dark charcoal.

The impressive vista depicted in this painting has never been identified conclusively. However it has long been considered a fanciful representation of the port of Archangel in northern Russia. Archangel, named after the archangel Michael, was a major trading post for both the Dutch and English from the mid-sixteenth century. However by the seventeenth century it was mainly the Dutch who traded in this area. In spite of its remote location on the Arctic coast and its wintry climate, Archangel retained its position as Russia’s most vital trading port until well into the eighteenth century. Archangel stands on the Northern Dvina River, near the White Sea, and is icebound for half the year. Peeters has conveyed the intense cold characteristic of the port and, since he travelled extensively, he may have experienced this first hand.

Born in Antwerp into a prominent artistic family, Bonaventura Peeters the Elder was the brother of artists Gillis, Jan and Clara Peeters and the uncle of Bonaventura Peeters the Younger. Comparatively little is known about his early life. Although the intimate and accurate knowledge of ships evinced in his many marine paintings hint at an early life spent at sea. De Bie commended Peeters on his delicate and convincing treatment of seas, calms and tempests. While Houbraken succinctly described the artist as a proficient and naturalistic master of ‘air, water, rocks and beaches.’ In 1634 Peeters joined the Antwerp Guild of St Luke and he continued to live and work in the city until the early 1640s. He died in 1652.
Back to Search Results
Buy a print License an image
Share:
Link copied to your clipboard!