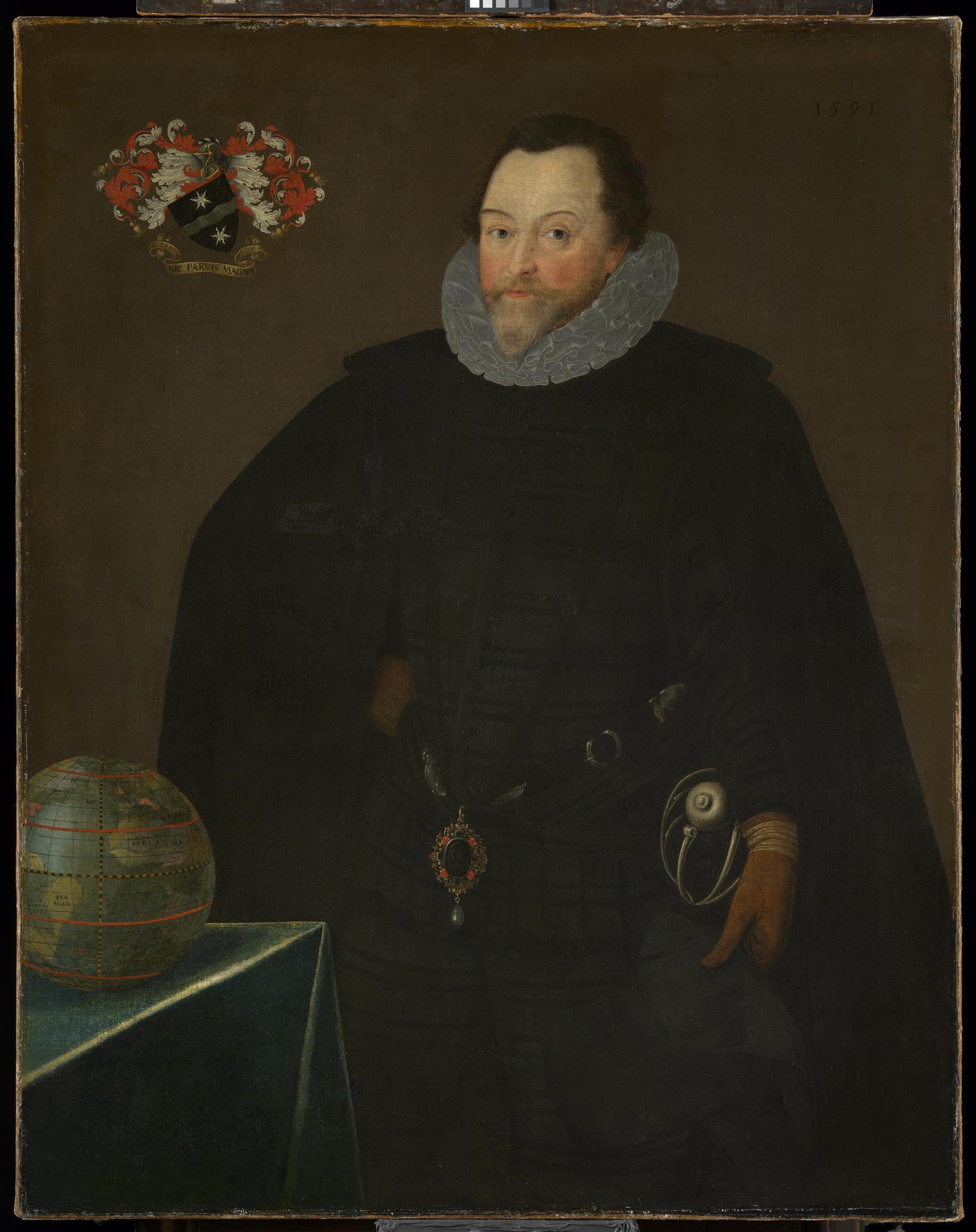 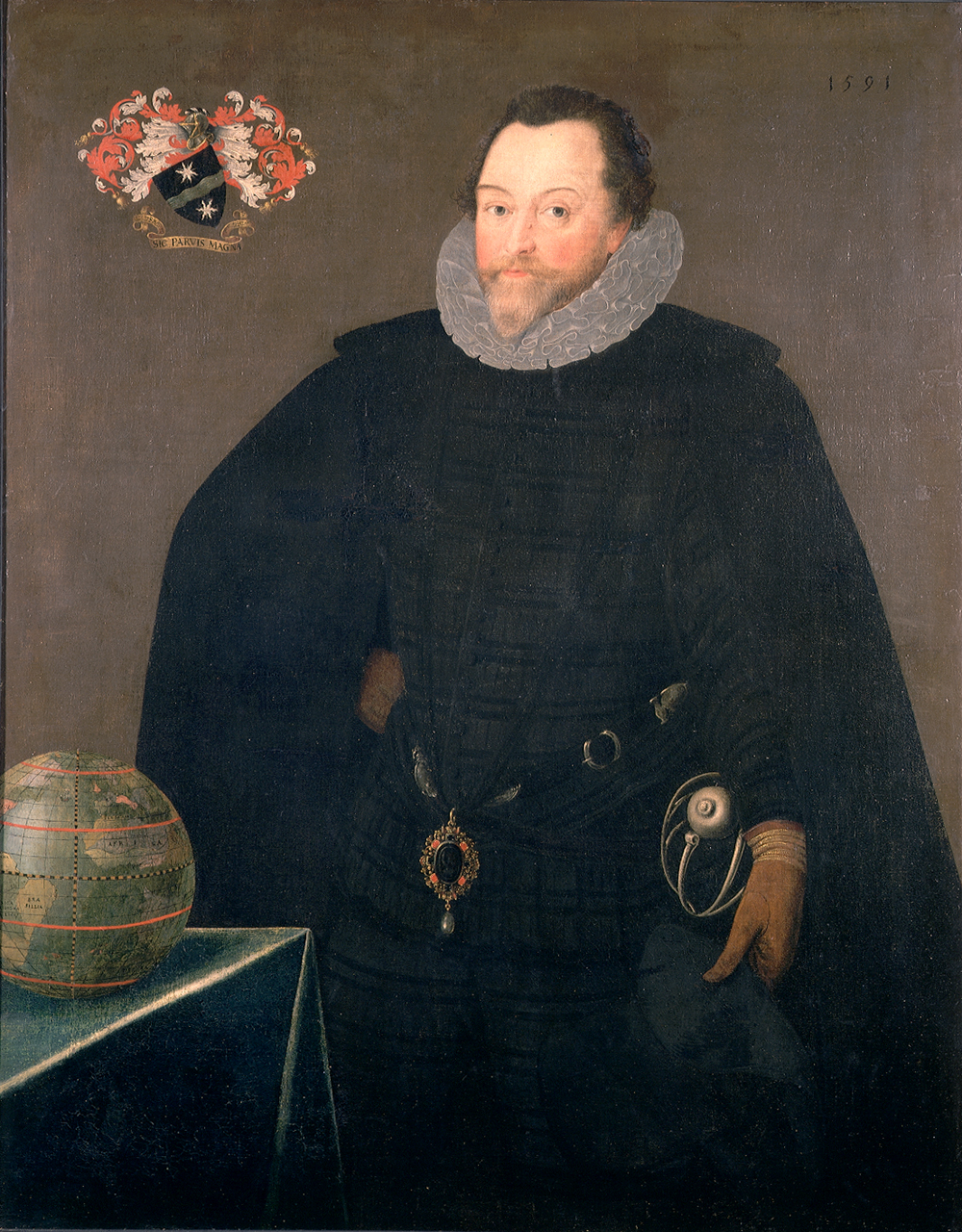 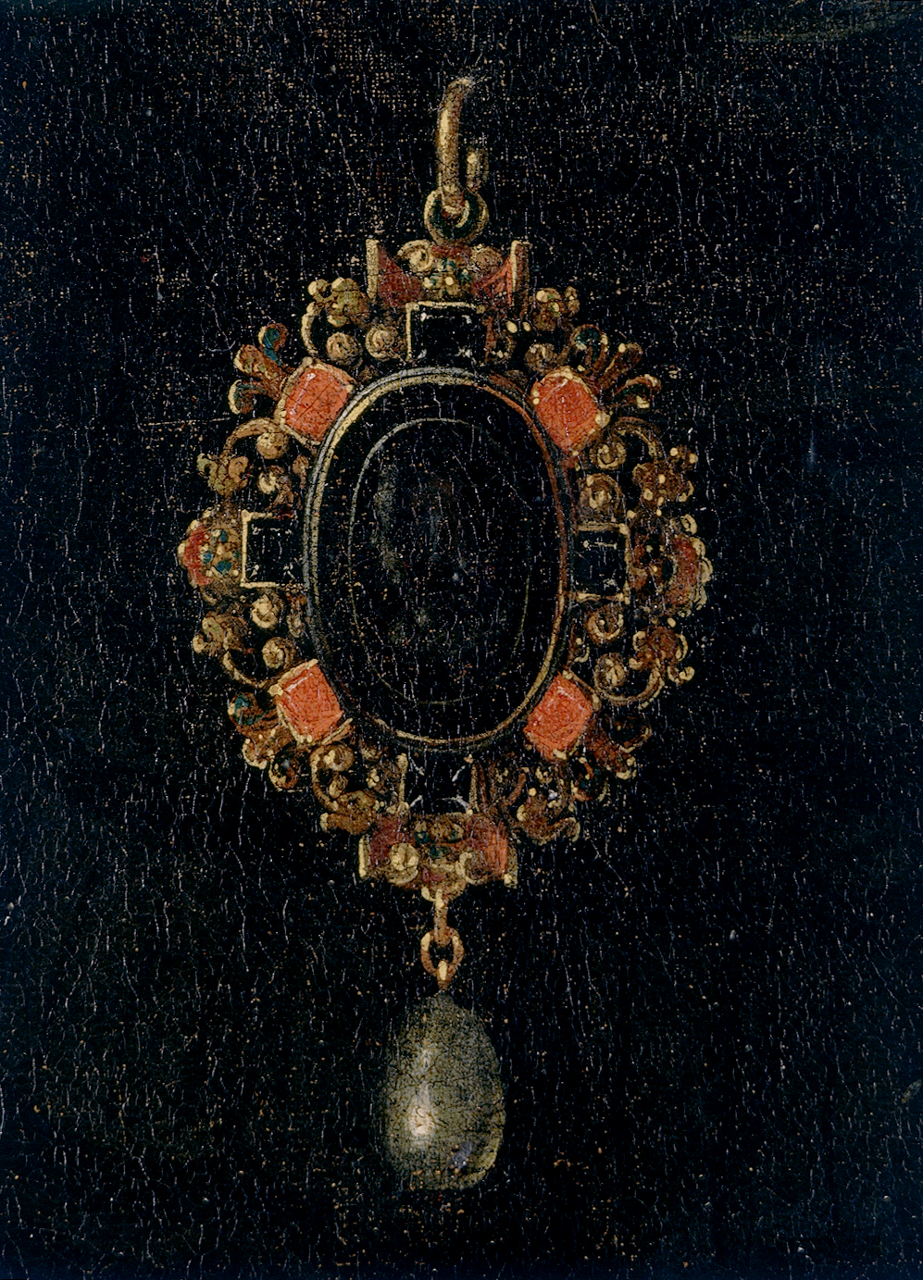 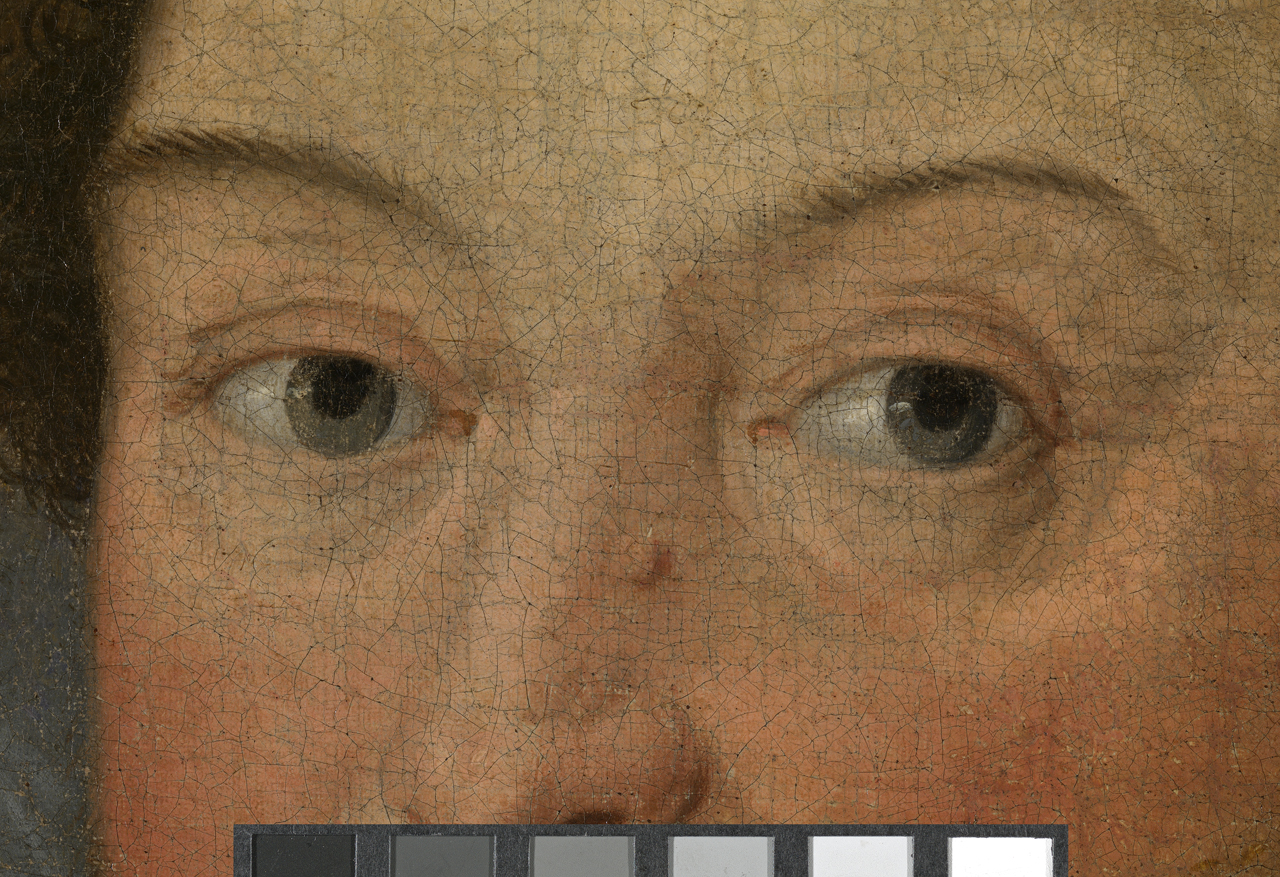 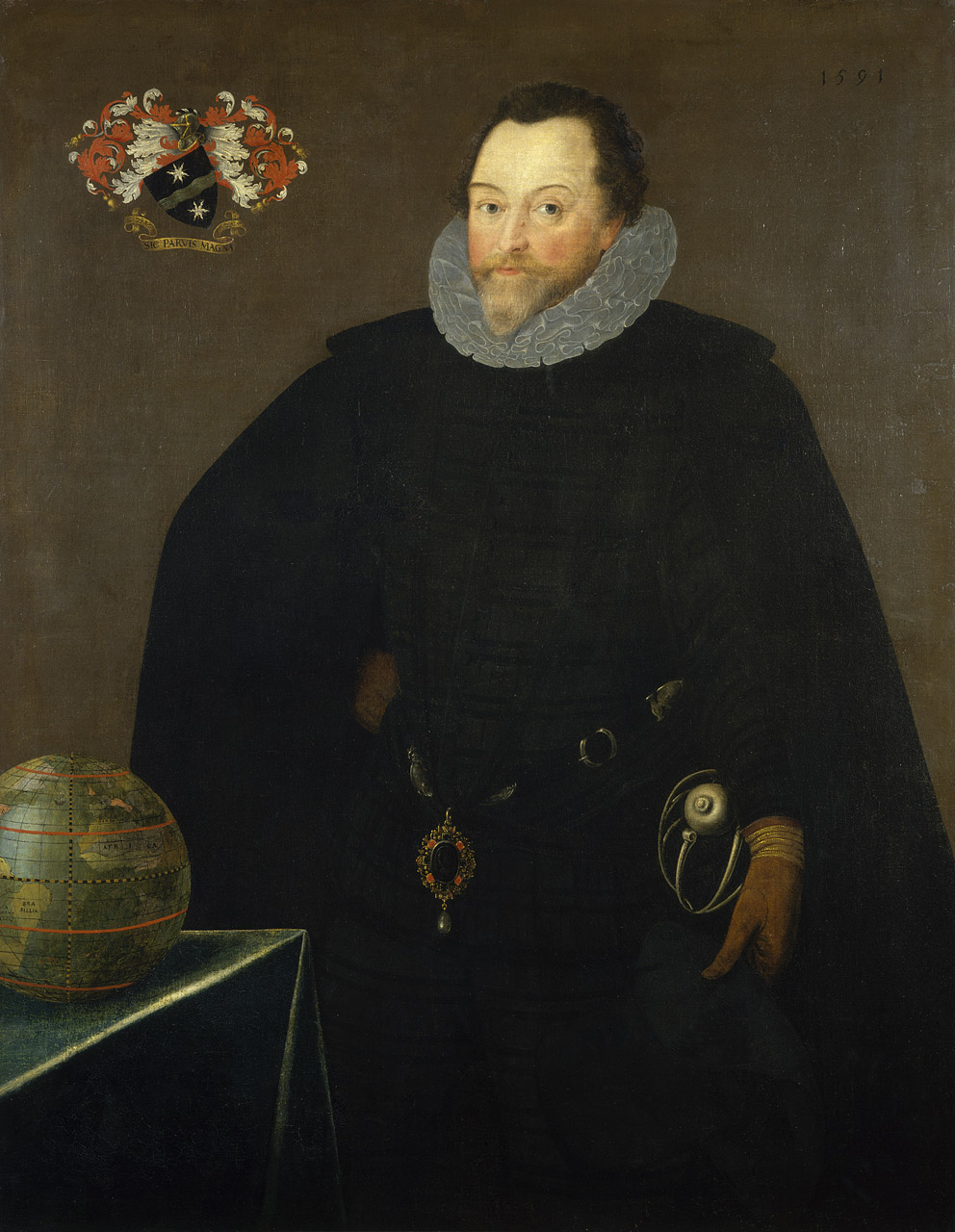 A three-quarter-length portrait slightly to the left, dressed in black, wearing leather gloves and the 'Drake Jewel' of gold with enamel, rubies and a drop pearl, hanging at waist level on a ribbon from his neck. To the left is a table covered in green velvet with a globe and, above, a coat of arms.

Drake was the second man to circumnavigate the world, 1577-80, the first Englishman to do so and, given that Magellan was killed before his voyage was completed, the first commander of an expedition to return with full success. He is portrayed here with an array of accessories denoting his fame and achievements. The sword refers to his service to his country, the globe to his circumnavigation of the world, and his coat of arms and the Drake Jewel - a gift from Queen Elizabeth I (now held on loan by the Victoria and Albert Museum) - both reveal his prominent social and economic status.

From relatively humble beginnings and early experience at sea with John Lovell and his own cousin John Hawkins, Drake pursued an outstandingly successful career as a privateer. His voyage round the world was underwritten by Elizabeth I and involved a series of highly profitable raids on Spanish ships and ports. He netted £160,000 for the Treasury, a healthy additional percentage for himself and a knighthood. His privateering adventures in the West Indies, 1585-86, were followed by his daring raid on Cadiz in 1587 when he successfully attacked the Spanish fleet which was being prepared for the invasion of England, and captured the 'San Felipe' on his way home. In the Armada campaign, Drake was a vice-admiral with his own force of 39 ships. After the defeat of the Armada he commanded a number of expeditions against the Spanish, both in Europe and America although his joint leadership of the disastrous Portuguese expedition in 1589 brought him to court-martial and temporary disfavour until 1594. Another version of this portrait, formerly at his home, Buckland Abbey, dates from that year. This painting was also done during his period out of favour and may be a copy of an earlier lost portrait.
Back to Search Results
Buy a print License an image
Share:
Link copied to your clipboard!