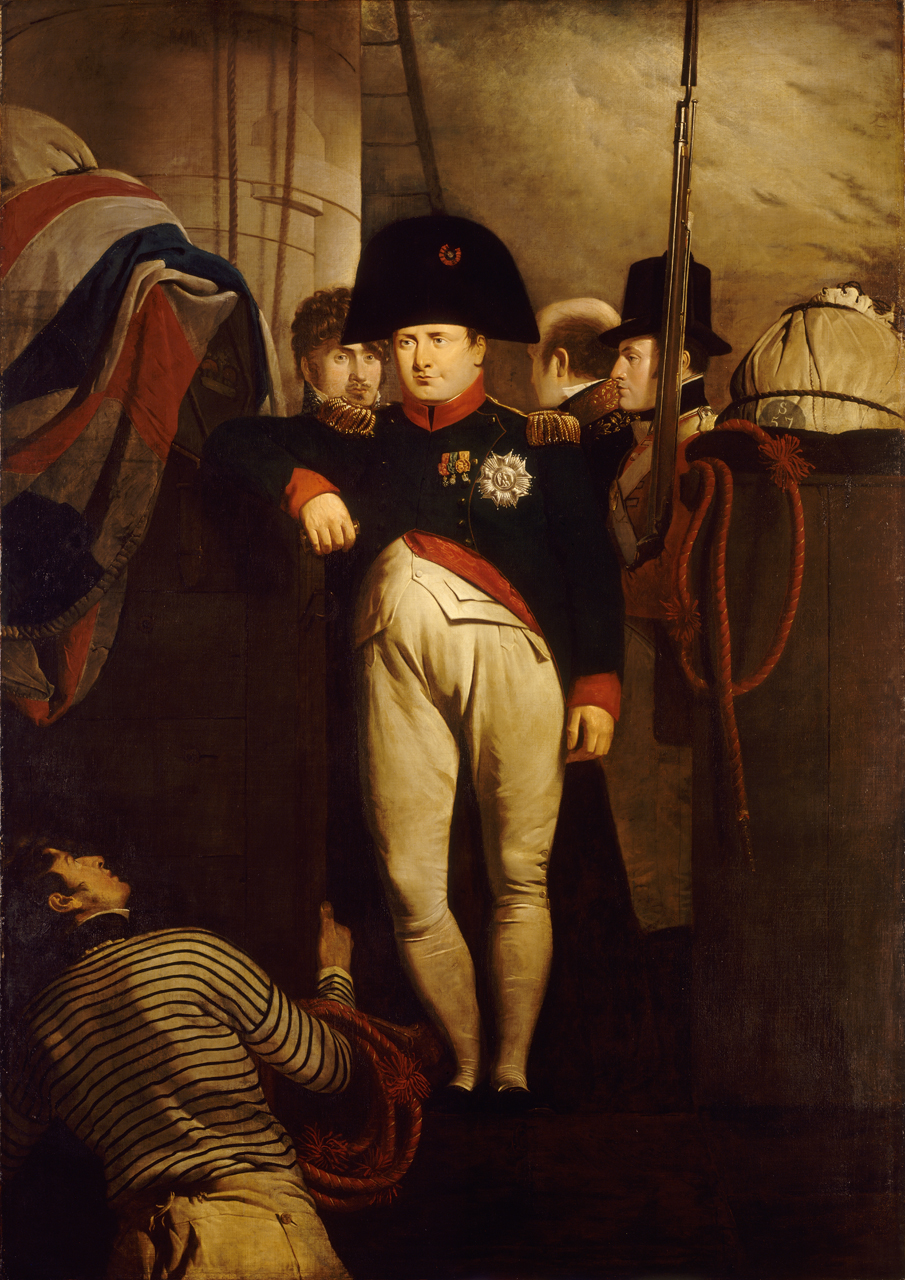 Napoleon Bonaparte on Board the 'Bellerophon' in Plymouth Sound

(Updated, July 2021) A full-length portrait slightly facing left, of Napoleon in the uniform of the Chasseurs. He stands at the gangway of the 'Bellerophon', 74 guns, his right elbow leaning on the bulwarks.

In 1815, Napoleon surrendered to Captain Frederick Maitland of the 'Bellerophon' which brought him to England and he was detained on board in Plymouth Sound during July while his fate was decided. He usually appeared at about 6.00 pm for the benefit of the numerous boats loaded with sightseers, which enabled Eastlake to make rapid sketches from life for the portrait. Behind Napoleon to the right, head turned away to the left and partly bald, stands Général Comte Bertrand. Behind him to the left is the head and shoulders, full face, of Captain Piontowski wearing the uniform of the Polish Guard, formerly part of Napoleon's personal troops. He subsequently wished to remain one of Napoleon's body servants but this was refused and he was landed at Plymouth. A British marine in profile to the left stands in front of Bertrand and to the right of Napoleon, while below him in a blue-and-white striped pullover is a sailor looking up at him.

Napoleon dominates the picture as he looks beyond the viewer in the direction of the onlookers. His right elbow leans immediately below a Union flag underscoring British victory and his defeat. The mainmast of the ship looms large behind him to the left, with rigging beyond. The sailor looking up at him from the gang-way accentuates the vertical thrust of the image, emphasised too by the height of the marine's rifle to the right. The sailor holds a rope in his right hand, similar to the rope draped over the side of the ship to the right. Both these humble players in the scene serve as Napoleon's guard but in positions also indicating respect to the fallen hero. A hammock with a sailor's watch number is lashed inboard against the side of the ship.

The painting was enormously popular when it was exhibited at No. 236 Piccadilly in 1815, and although based on the eyewitness account of Eastlake when a young man, the end result is heavily contrived. Several certificates were issued to testify to the true resemblance of the painting to Napoleon from which Charles Turner created a well-known mezzotint based on another version, only showing Napoleon.

This much smaller oil, now in the Bodleian Library, Oxford, may be a preliminary one that Eastlake made from his on-the-spot sketches, since details in it are omitted in the finished composition. For example there is a metal hook set in the mast above Napoleon's head in the small version and engraving and only the hammock numbered 'S57' (Starboard watch, no. 57) appears in the large one; those numbered S55 and S56 in the small version and the print are here covered by the Union flag at upper left. (The Museum's copy of the print is PAH5500.)

Sale of the print and exhibition of the large version made Eastlake's name and earned him a considerable sum. This helped him to go and study in Italy for 14 years, forwarding a career which carried him on to becoming President of the Royal Academy in 1850 (the year he was also knighted) and first Director of the National Gallery in 1855.
Back to Search Results
Buy a print License an image
Share:
Link copied to your clipboard!