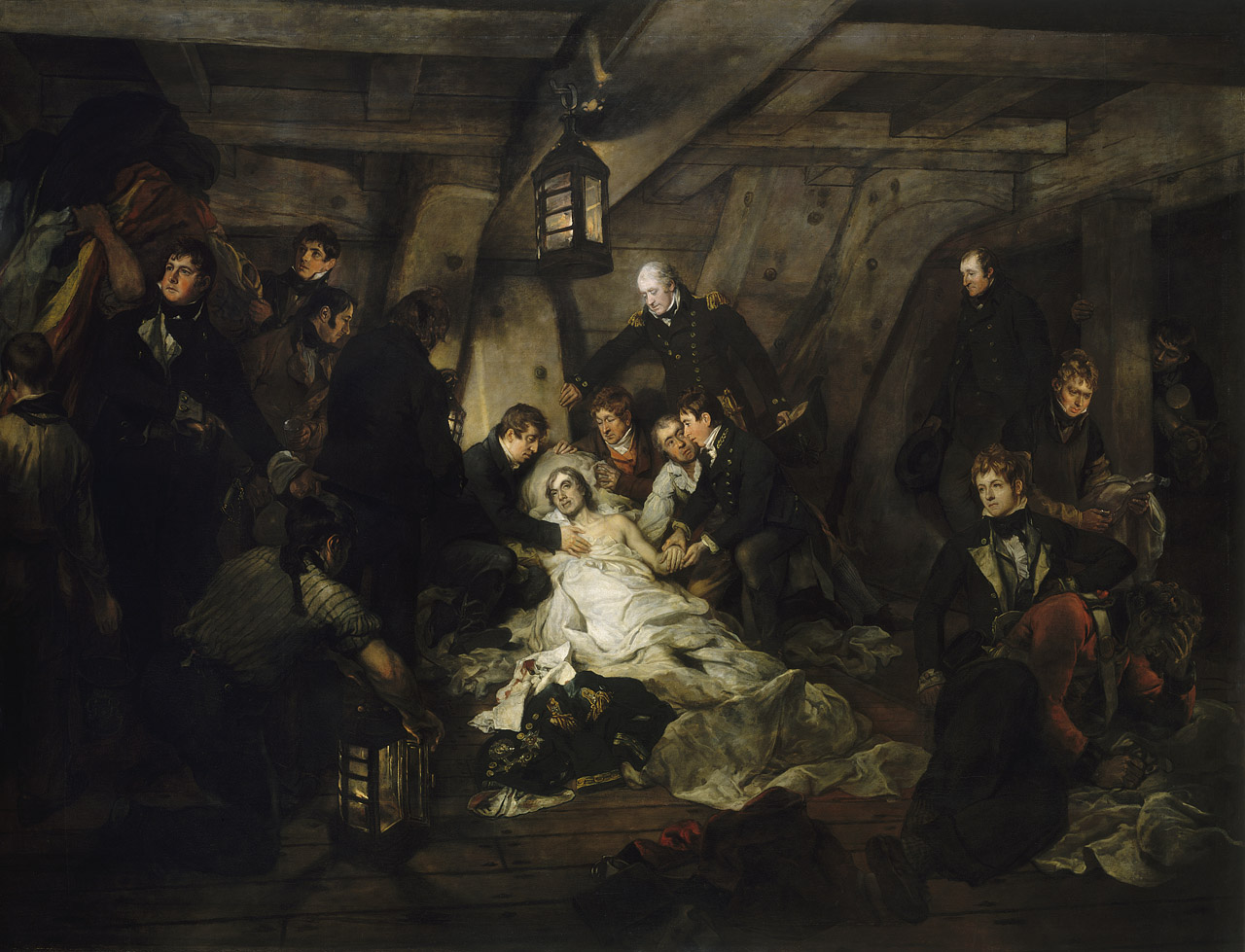 The scene in the cockpit on the 'Victory', 100 guns, as Nelson lay dying during the Battle of Trafalgar. Nelson reclines full-length facing to the left, covered by a sheet, leaving only his head, left shoulder and arm visible, with his uniform coat discarded at his feet. His portrait was painted from a posthumous sketch of the body that Devis made on board the 'Victory' on its return to England in December 1805. Devis also made life sketches of those attending Nelson at his death, and incorporated them into this death scene.

In the centre at the back, the 'Victory's' Captain, Sir Thomas Masterman Hardy, stands over Nelson, his right hand on the ship's knee against which Nelson reclines. He stands full-length to left, in captain's (over three years) undress uniform, 1795-1812, his lower limbs masked by the surgeon, William Beatty, and Nelson's steward, William Chevallier (Nelson's spelling, though also sometimes Chevalier or Chevailler). Hardy leans over them gazing down on Nelson, his cocked hat in his left hand. The ship's chaplain, Dr Alexander Scott rubs Nelson's chest. Walter Burke, the Purser supports Nelson's pillow immediately to his left and is shown half-length to the left, half behind Chevallier and wearing a brown coat and red waistcoat. Chevailler is shown half-length to right in a white shirt, and is on Nelson's left side. He looks towards the doctor and is partly masked by him. Beatty is shown full-length facing left in profile kneeling beside the dying Nelson and feeling his pulse. He is in surgeon's uniform, 1803-25, with blue breeches and hessian boots.

On the left of the picture are Lieutenant John Yule and Midshipman Edward Collingwood who is shown head and shoulders to the left, mainly obscured by the figure in front of him. He helps a sailor to handle some captured flags. Since he was a volunteer he has no uniform, but wears a midshipman's coat without the patch. Gaetano Spedillo, Nelson's Neapolitan valet, is shown full-length in profile to the right, in a brown coat and holding a glass in his left hand. His lower limbs are obscured by a figure in the foreground of the left of the painting of the group around the dying Nelson. On the right are Lieutenant George Miller Bligh and Assistant Surgeon Neil Smith. Bligh is half hidden by a marine in the foreground. He is shown half-length seated, facing to the left, apparently dazed from a wound in his head, wearing a lieutenant's full-dress coat, 1787-1812, with his left hand on the wound in his side. Looking towards the dying Nelson, in the right background, stands the ship's carpenter, William Bunce, slightly masked by Smith and Bligh. He is almost full-length to the left in profile wearing a warrant officer's uniform, natural coloured breeches and holds his hat in his right hand.

Painted two years after the event, this complex painting concentrates on the human response of the men involved in this important event in the life of the nation. To evoke this, the artist has incorporated portraiture with the imagery of Renaissance religious painting, bathing Nelson in a golden light.
Back to Search Results
Buy a print License an image
Share:
Link copied to your clipboard!