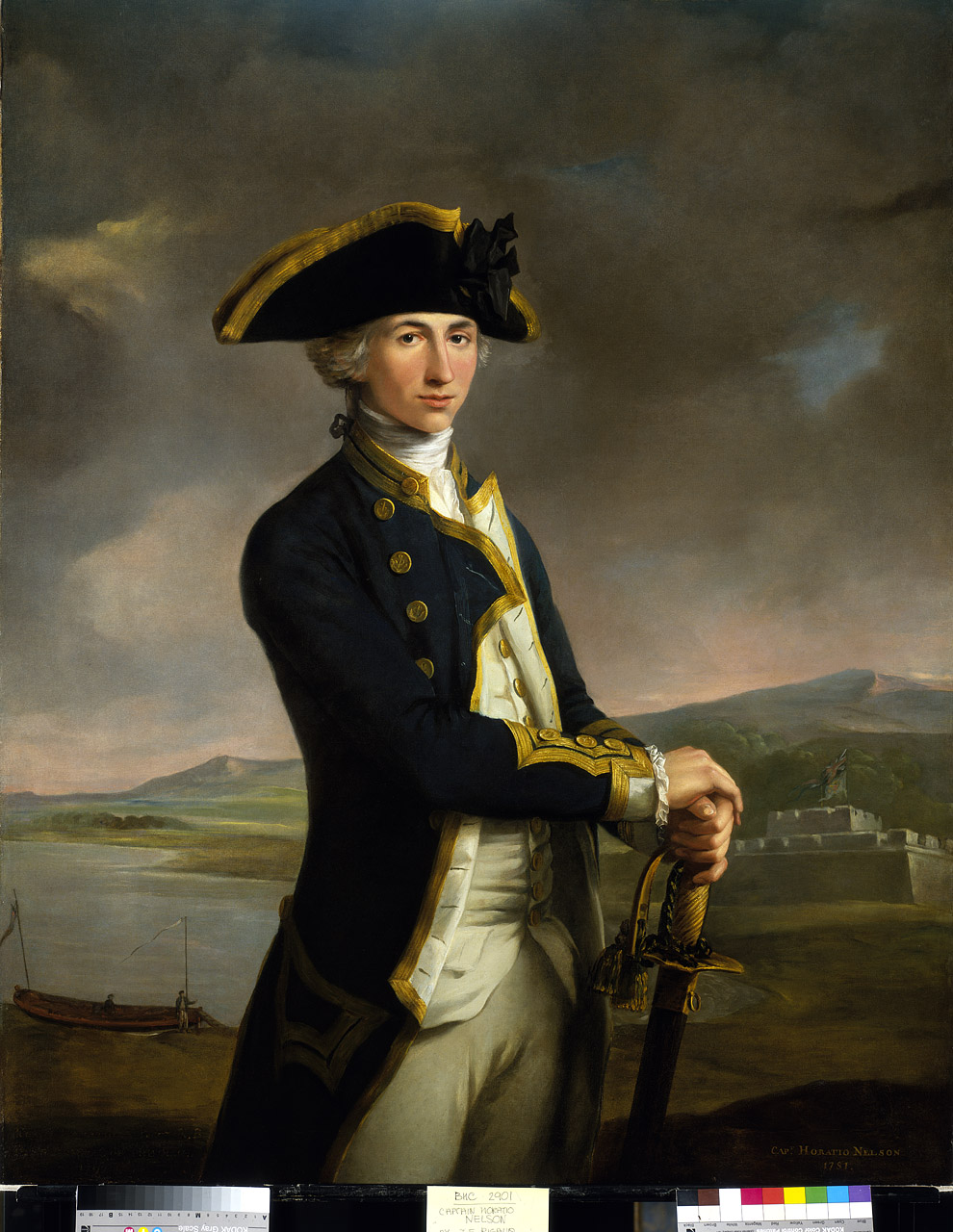 A three-quarter-length portrait to right in captain's full-dress uniform, over three years seniority, 1774-87. He wears a hat and his hands rest on his sheathed sword in front of him. Although the portrait was begun in 1777, when Nelson was a lieutenant, it was not finished until at least 1781 when he had returned to England as a captain and possibly a little later, given that over-three-years uniform would only have been appropriate from mid-1782, when he was again out of England. X-rays reveal that, as begun, the portrait showed a rounder-faced Nelson standing bare-headed in lieutenant's uniform with his hat under his left arm. The fined-down features of the finished picture reflect the effects of his intervening years in the tropics, including the fever that nearly killed him during the San Juan River expedition in Nicaragua, in 1780. Fort San Juan, which Nelson helped capture on that occasion is shown as the background here and is believed to have been painted by Dominic Serres.

This was one of several portraits of promising young officers painted for their early commander, Captain William Locker. Two others were Nelson's friends Charles Morice Pole and James Macnamara.. Locker had been Nelson's captain in the frigate 'Lowestoffe', his first ship after being commissioned lieutenant. (Locker also knew and patronized Serres, who - very unusually - painted his portrait, now in the Yale Center for British Art.) In Nelson's case, the Rigaud portrait seems to have been started at Locker's expense while the 'Lowestoffe' was commissioning for sea, and Nelson corresponded about its imminent on completion with Locker in Feb-May 1781 on his return to England. Nelson would have seen it again in Locker's quarters as Lieutenant-Governor of Greenwich Hospital in 1797, while visiting him and recovering from loss of his arm. In August that year Locker also had it engraved by Robert Shipster of Woolwich (see PAD4304) to satisfy public demand after Nelson came to prominence at the Battle of Cape St Vincent, so it is also the first published portrait of him. Shipster's engraving gives the date of painting by Rigaud as 1786, which he can only have had from Locker. It is hard to believe it was finished that late, not least since Nelson was abroad, 1784-87, but it is possible that Locker only received it then (or perhaps wrongly recollected doing so when asked).

Rigaud was born in Turin. He studied in Turin, Florence and Bologna, and lived in Rome for two years from 1768. In 1771 he settled in London, becoming an Associate of the Royal Academy in the following year and a full Academician in 1784. He received a steady stream of commissions for historical subjects, as well as decorative compositions and portraits. Rigaud was one of the major painters of large-scale decorative schemes for fashionable interiors of the late 18th century. As a portrait artist, he could be frank and expressive when not seeking heroic effects. The painting is signed and also inscribed 'Capt. Horatio Nelson 1781', though this was added later.
Back to Search Results
Buy a print License an image
Share:
Link copied to your clipboard!