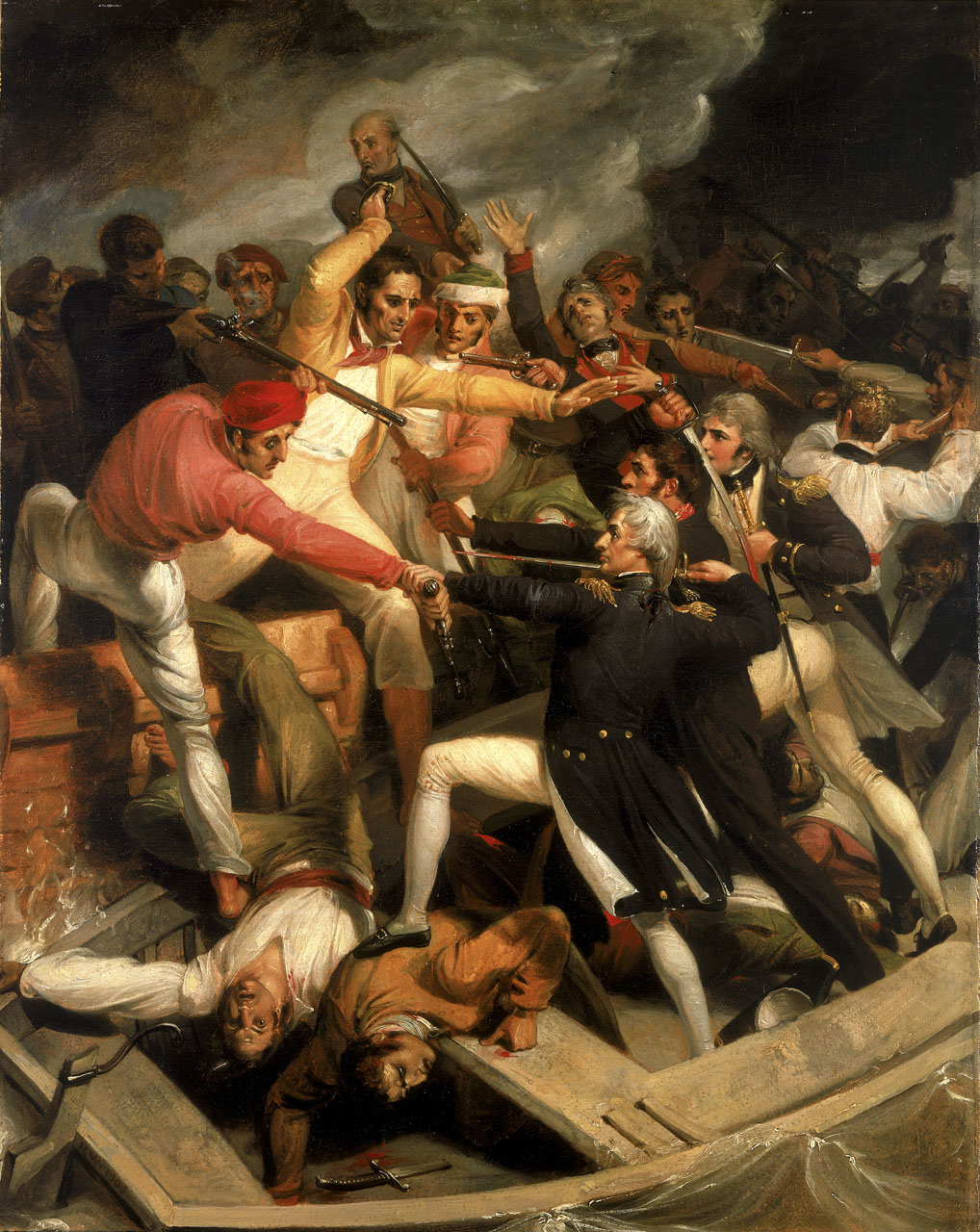 Nelson in conflict with a Spanish launch, 3 July 1797

After the Battle of St Vincent, 14 February 1797, the Spanish fleet was blockaded in Cadiz harbour by the British. The inshore squadron of the fleet was commanded by Sir Horatio Nelson. On 3 July, he sent a bomb ketch close inshore to provoke a Spanish reaction. This proved successful and Nelson launched some armed ships' boats to rescue it, with himself in his own admiral's barge. He was accompanied by John Sykes, his coxswain, and Captain Thomas Fremantle. Although significantly outnumbered, the barge was soon locked in combat with a Spanish launch. In hand-to-hand fighting, Sykes twice saved Nelson's life, sustaining severe head injuries. (According to the 'Life of Nelson' by Joseph Allen (1852), a Greenwich Hospital official, Sykes later became gunner of the 'Andromache' and was accidentally killed firing a salute at Gibraltar in 1799. An alternative report in the 'Annual Register', 1841, states that he died in his 80s that year as a Greenwich fishmonger. )

This crowded image shows Nelson engaged in hand-to-hand combat with the Spanish boat crew. The scene is viewed from close to the starboard quarter of Nelson's barge, which is alongside the Spanish launch. Lying on his back, having apparently fallen from the launch, is a dead or wounded Spanish sailor. Another lies slumped across the same thwart with Nelson's right foot on his back. With his left leg braced on the floor of the barge, Nelson's left hand grips the right wrist of a third Spanish sailor to turn away his pistol. The Spaniard, wearing a red shirt and turban, looks towards Nelson whose blood-stained sword is poised ready to stab him. Beyond this sailor is a fourth with a musket pointed at Nelson and to the right of him is a fifth, with one foot in the barge and his cutlass drawn back to strike him over the head. A further Spaniard to the right tries to spear Nelson with a boarding pike, which is being deflected by Sykes with his left hand. The coxswain stands behind Nelson with his cutlass drawn back in his right hand, about to deflect the blow of the Spanish swordsman who is aiming to split Nelson's skull. This attacker is also about to be shot by Captain Fremantle, who has a pistol raised high in his right hand to do this from his position just to the right of Sykes. Behind and above this central conflict is the Spanish commander urging his men on. To his right another Spanish officer reels back clutching his breast, while in the right background a mêlée is in progress. The British boat is lower in the water than the crowded enemy launch, emphasizing the disparity of forces, while Nelson, Sykes and Fremantle form a unified, shoulder-to-shoulder group of brothers in arms, with Sykes's role in saving Nelson interpreted in some detail. Westall has employed a language of dramatic gesture and expression to emphasize the mayhem of combat, producing a palpably staged result complete with background smoke effects to heighten the overall impact. The synchronization of arm gestures also highlights the theatricality of the image, the blood on Nelson's sword probably being that of the two Spanish sailors lying dead or wounded in the British boat. The neat, uniformed and co-ordinated appearance of the British trio contrasts with the unkempt appearance and wilder action of the Spanish enemy, adding to the sense of staged unreality.

This painting was commissioned by John M'Arthur, as a plate for 'The Life of Admiral Lord Nelson, KB' of 1809, the first major biography, which he wrote with James Stanier Clarke. Engraved by A. Smith it formed part of a series of five painted by Westall for the book, all intended to show Nelson's life as a series of heroic acts. With two by West, also used in the same way (BHC0566 and BHC2905), and Lemuel Abbott's best-known portrait of Nelson (BHC2889), all were presented to Greenwich Hospital in 1849 'by Jasper de St Croix, Esq., and several other patriotic individuals'. This canvas was exhibited at the Royal Academy in 1807 with the caption 'Rear-Admiral Nelson, when in his barge, with its usual complement of men, during the blockade of Cadiz, July 3, 1797, attacking a Spanish launch, with 30 men, which, after a severe conflict, he succeeded in carrying. On this occasion Captain Freemantle nobly supported the admiral and his coxswain, John Sykes, repeatedly saved his life'.

The artist came from an English family of painters and illustrators, and was a book illustrator who turned to painting historical subjects. He was apprenticed in 1779 to John Thompson, a heraldic engraver in London. In his spare time he studied drawing at the Royal Academy Schools in 1785, became an ARA in 1792 and an RA in 1794. His last employment was as drawing master to Princess Victoria. Although his output was prolific, unfortunate picture dealings led him to poverty. The painting is signed and dated 'R W 1806'.
Back to Search Results
Buy a print License an image
Share:
Link copied to your clipboard!