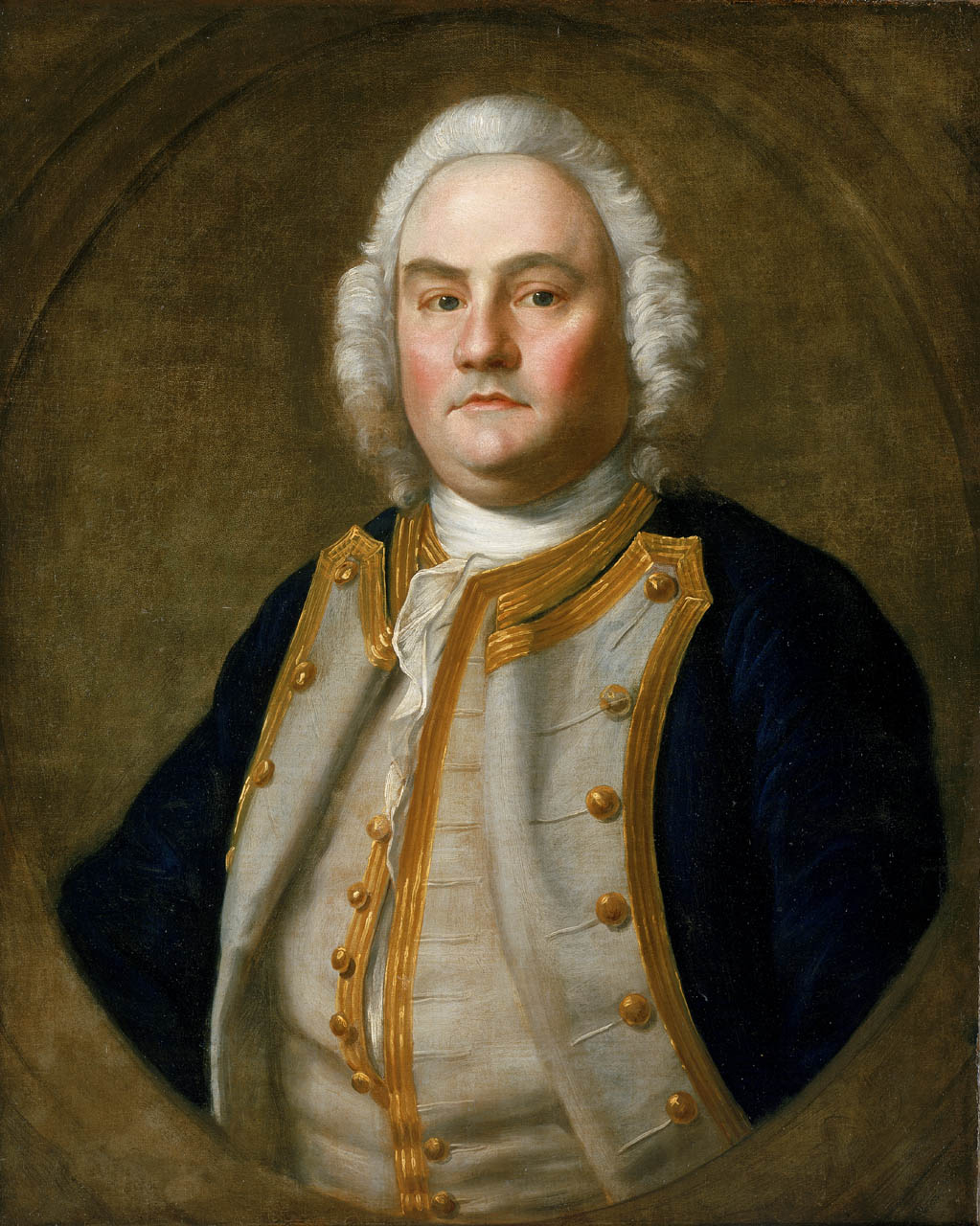 (Updated,February 2019) A half-length portrait slightly to left in captain's undress uniform, 1748-67, and white wig. The portrait is set in a plain background inside a painted oval.

The sitter was master of the 'Centurion' on Anson's voyage around the world, 1739-44, but was made third lieutenant of the ship on 21 June 1743 by Anson (which the Admiralty later confirmed) just after his capture of the treasure galleon 'Nuestra Senora de Covadonga'. Augustus Keppel was made lieutenant at the same time and John Campbell replaced Nutt as master of 'Centurion'. In March 1745 Nutt was in command of the 'Tavistock' , sloop, and on 12 August was promoted to post-captain in a French-prize frigate called the 'Grand Turk', 22 guns. In 1748 he was with Admiral Hawke as part of the 'Western Squadron' in the Bay of Biscay in command of the 'Tavistock', a ship of 50 guns launched in 1747 (when his previous sloop was renamed 'Albany').

In 1749, though intended to command the 'Centurion' , he agreed at Anson's wish to cede this to Keppel and instead take command of the 64-gun 'Anson' (instead of Keppel) which was due to become guardship at Portsmouth. This allowed Keppel, in the role of commodore of a small squadron, to take the ship on which they had all circumnavigated on a mission to the Mediterranean which was significant in his career and that of the painter (Sir) Joshua Reynolds, who sailed with him as a friend and guest on his way to study in Rome. The 'Anson' was Nutt's last sea command. In 1754 he became one of the four Captains of Greenwich Hospital, being noted as 'third Captain' at the time of his death in terms of seniority, a position worth £260 a year.
This portrait is a pair with one of Nutt's wife (see BHC2916), probably made about the time of and to mark their marriage. She was Elizabeth Cooke of Winchester (b. 1726) and they married at Wickam, Hants, on 8 August 1749 and had two sons: George Anson Nutt (1750- after 1793) and Justinian Saunders Bentley Nutt (1754-1811). The former's godparents were Lord and Lady Anson, and Captain (later Admiral Sir) Piercy Brett: the latter's godfathers were Captain (later Admiral Sir) Charles Saunders and Captain (later Admiral Sir) John Bentley. Justinian junior became an East India Company sea officer. He was sworn in as captain of the East Indiaman 'Duke of Kingston' on 26 May 1779, commanding her until she was burnt off Ceylon on 20 August 1783 during her fourth voyage, and then other India ships (e.g.'Thetis', 1792-93). Four generations of Nutts included a Justinian, and the male descendants were generally in military and sea service for about a century.

Nutt died at Greenwich on 11 December 1757: his will was proved on 18 January 1758 with Brett, Bentley, Robert Jones of the City of London and Francis Cook of the Pay Office as his executors. In 1761 his wife remarried to Charles Besson, one of the eight Lieutenants of Greenwich Hospital of whom there is also a miniature in the collection (MNT0120).
Back to Search Results
Buy a print License an image
Share:
Link copied to your clipboard!