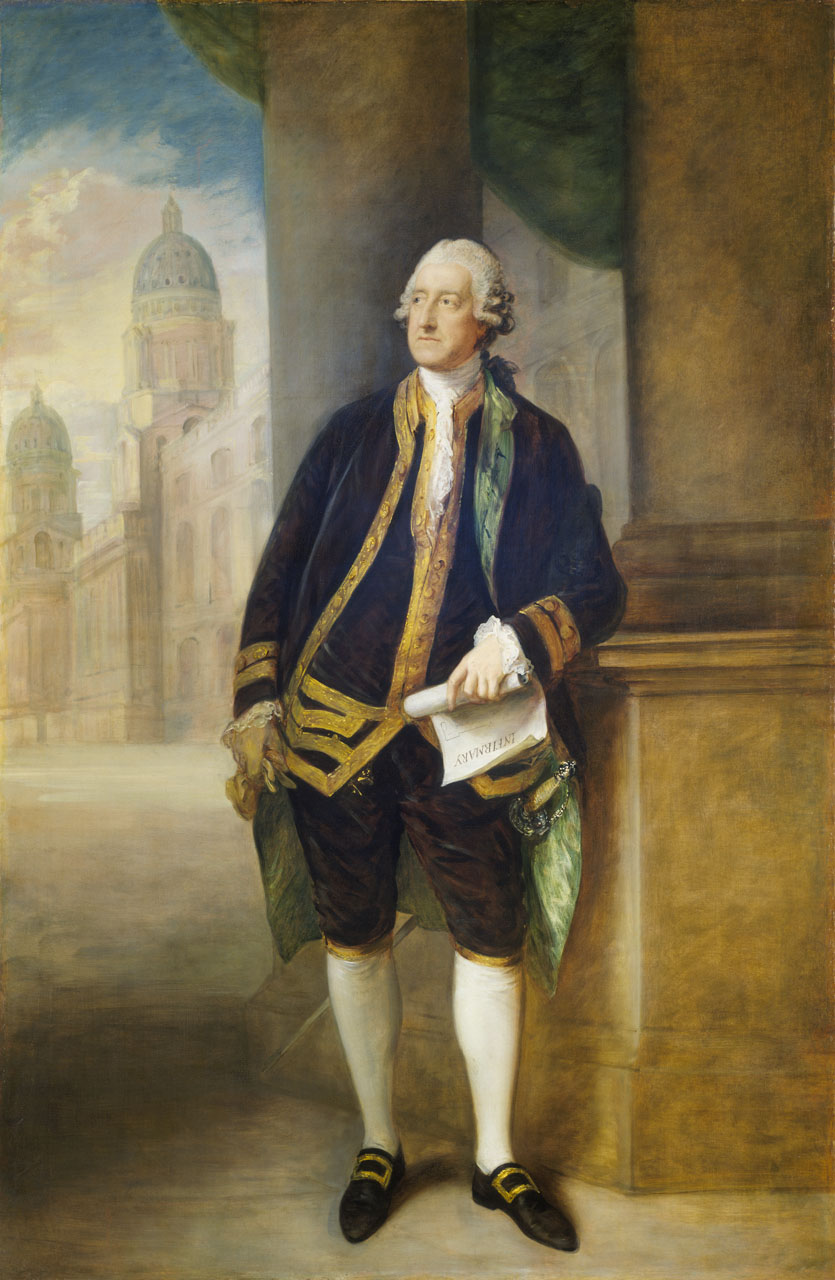 Full-length to left in a black velvet suit, the coat lined with green silk and both coat and waistcoat laced with gold braid. He wears white silk stockings, black buckled shoes, a tie wig and a light sword. His left elbow rests on the base of a column and in his left hand is a plan of the Infirmary of Greenwich Hospital. The Hospital itself forms the background.

Sandwich was First Lord of the Admiralty on three separate occasions, 1748-51, 1763-65 and 1771-82. He became very unpopular when aspects of his private life became intimately involved with his public life but it has now been shown that the bad reputation fostered by his enemies and perpetuated by Victorian historians, underrates both his merits and his historical importance. During the War of American Independence in particular he initiated notable reforms, especially in the dockyards and ship construction, which proved critical in the sailing navy's later success against Revolutionary France. He also initiated an attempt to reach the North Pole and was a firm supporter of the voyages of Captain Cook, who named the Sandwich Islands (Hawaii) in the Pacific after him. The modern sandwich is also named after him, though the ill-founded story that it was something brought to sustain him at the gaming table is far less likely than that he ate this way in long hours at his Admiralty desk.

He was in fact, by contemporary aristocratic standards, neither wealthy nor a heavy gambler or libertine and was certainly a conscientiously hard worker. He was also a man of unusual interests, being remarkably approachable, a pioneering and enthusiastic cricketer, (real) tennis player, fisherman and yachtsman and of great importance in his passion for and support of 'ancient music', especially that of Handel. The modern popularity of Handel's 'Messiah' springs from his championship of it (and similar work then thought out of fashion) notably by a sensational Handel Commemoration that he organized in Westminster Abbey before George III in 1784.

Sandwich's private life was marred by tragedy. His happy marriage disintegrated with the growing mental illness of his wife in the 1750s and she was declared insane in 1767. The singer Martha Ray, his mistress from 1762 and devoted mother of their five illegitimate children, was shot dead by a rival suitor, the Revd. James Hackman, on the steps of Covent Garden Theatre in 1779.

This portrait was commissioned for Greenwich Hospital by its Governor, Admiral Sir Hugh Palliser, and was presented in 1783. Palliser, was an example of the able but not especially well connected men to whom Sandwich gave patronage, and was himself Cook's early patron and later Comptroller of the Navy. He ultimately lost heavily against the Keppel faction in the furore between them resulting from the inconclusive Battle of Ushant in 1778, but Sandwich stuck by him and in 1780 appointed him Governor at Greenwich. This painting was Palliser's public tribute of thanks to Sandwich. The plan which Sandwich holds here is of James 'Athenian' Stuart's Hospital Infirmary (now the Dreadnought Library of Greenwich University), built in the 1760s during his second term as First Lord.
Back to Search Results
Buy a print License an image
Share:
Link copied to your clipboard!