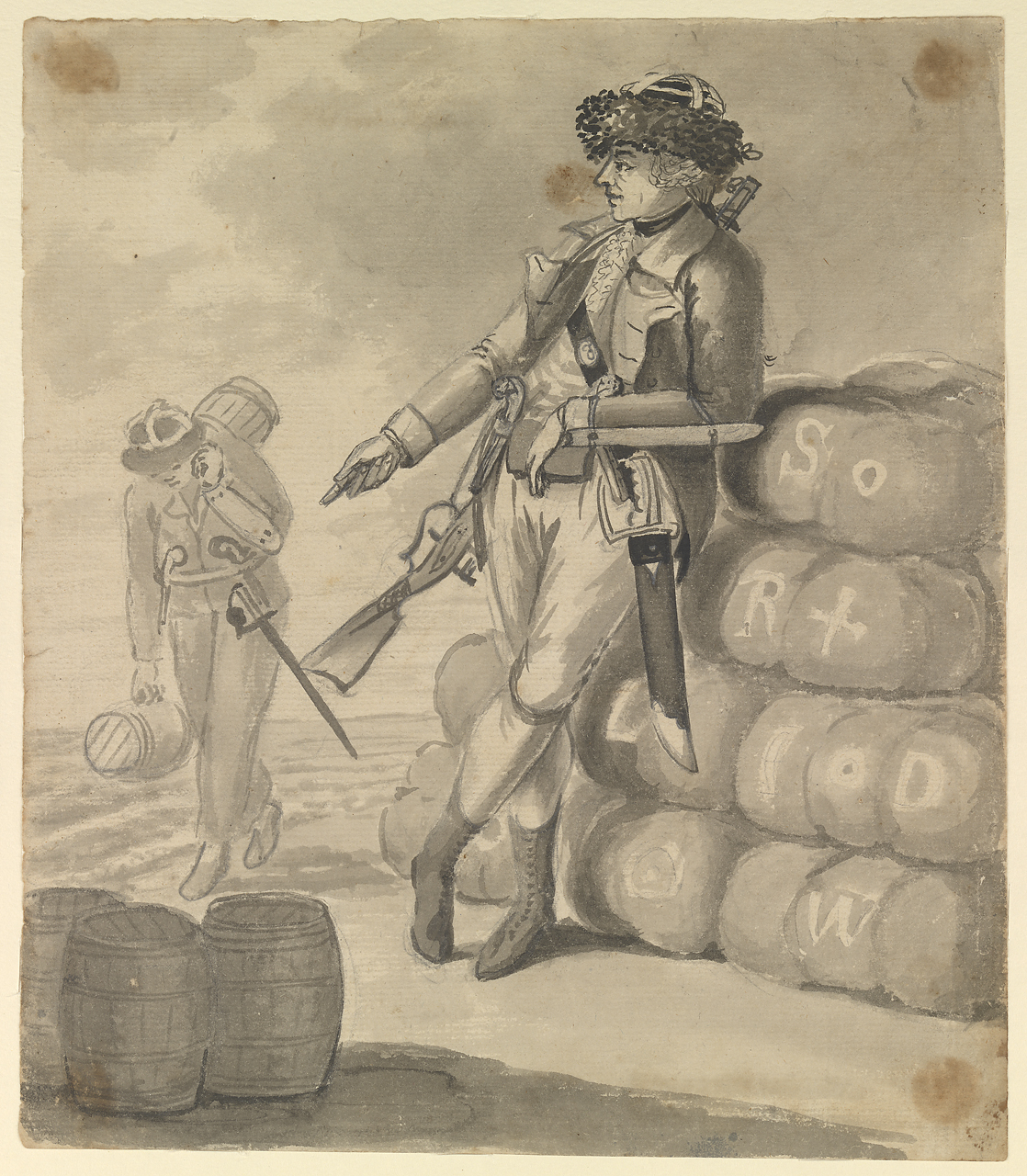 A military figure leaning on a pile of bales, with a seaman carrying kegs in the background [Bray album]

(Updated, August 2016) This is the first of 73 drawings (PAJ1976 - PAJ2049) by Bray (plus one signed 'NF 1782') preserved in a 19th-century album that was purchased for the Museum by the Macpherson Fund of the Society for Nautical Research in April 1991. They have now been separately remounted. Bray (1750-1823), was second lieutenant of the 44-gun ‘Pallas’ under Captain the Hon. William Cornwallis (1744-1819) – later a well-known admiral - on two voyages (1774-77) to report on British interests in West Africa, including the slave trade. The dated drawings refer only to the first of these, from December 1774 to September 1775, though a few may be from the second. Others comprise country views, some of Deal, Kent (where Bray may have come from), and others of social-history interest.

This drawing shows a military figure leaning on a pile of bales on a beach, possibly as a sentry, with kegs in the foreground and a man carrying more behind along the shoreline. The lettering on the bales may be merchant marks. The main figure has previously been described as a Marine and his coat may have white facings, but other elements are wrong notably the 'fur'-edged hat which has a 'secret' - an iron frame as protection against sword cuts- fixed and worn on the outside. The man in the background has a slightly simpler one on a similar hat. The sentry is also not carrying a standard musket but a short-barrelled rifle, perhaps with a hexagonal barrel since it does not appear to be fitted with or for a bayonet: he also wears a brace of pistols on his belt and a short-bladed hanger from a shoulder strap with a centre badge bearing the figure '8'. The man behind is similarly armed (but no rifle) though his sword looks more like a standard naval cutlass. Both figures also have some form of probably metal guard fixed to their left forearms, possibly for warding off blows in combat. The main figure clearly belongs to a corps which remains to be identified and, given the beach location, it has been suggested he may be connected with anti-smuggling operations. The placing of the drawing at the beginning of the album may suggest the study was done by Bray before he sailed for Africa in December 1774, making Portsmouth a possible location, albeit on a beach. However the album order is probably not original so the scene may not be in England, despite the lack of any exotic element to indicate where else. Whatever the case, the fully armed figures suggest they are on some form of active service, with conflict a possibility.
Back to Search Results
Buy a print License an image
Share:
Link copied to your clipboard!