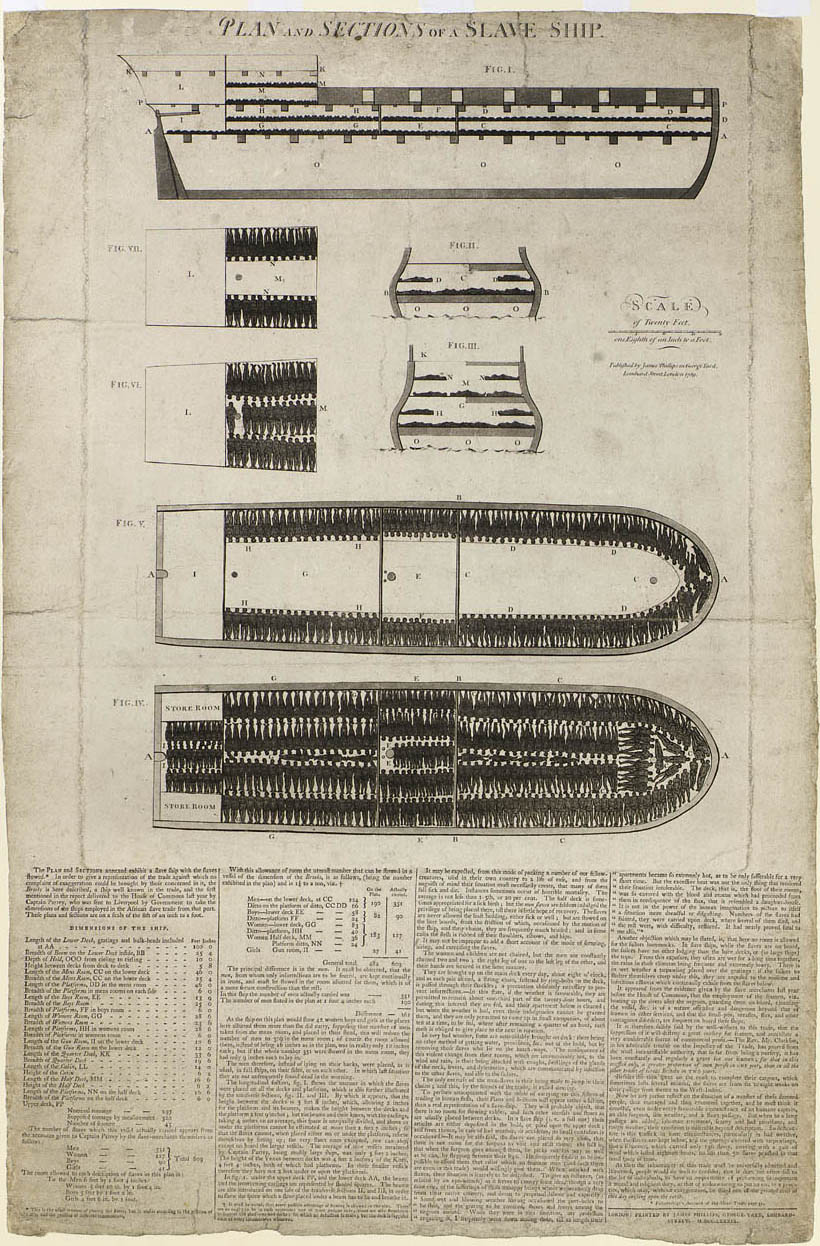 Plan and Sections of a Slave Ship [the 'Brooks' sometimes 'Brookes']

The first image of this Liverpool slave ship, the 'Brooks', was produced by William Elford and the Plymouth Society for Effecting the Abolition of the Slave Trade in late 1788. There is said to be a copy of this, as the foldout plate accompanying Elford's related anti-slavery pamphlet, in the library of the Society of Friends. It was also published on a broadsheet in Bristol in 1789. It just shows a single plan image of slaves packed into a hull, on the Bristol version above the abolition campaign's 'Am I not a Man and a Brother' medallion, with text signed by Elford below. The image was then 'improved' by the London SEAST Committee and republished as this broadsheet by their Quaker printer, Phillips and distributed to MPs and others in April 1789. The Phillips image was much copied elsewhere (see ZBA2721 for an example and further notes) usually without the extensive text shown here, and with the various hull elements rearranged to suit circumstances.

On this Phillips version the name of the 'Brooks' [sic] is given in the first paragraph of the text, not the title.

The ship was built in 1781 and operated until 1804 as a slaver, being first registered by Lloyds as the 'Brook' and then the 'Brooks' owned by J. Brooks, though it changed hands at least twice thereafter. It was one of nine slavers measured (as the text states) by a Captain Parrey RN in the course of an enquiry on the subject, probably Anthony Parrey who died in late1789. It is also often mistakenly referred to as the 'Brookes' from an early date, mirroring the variant spelling of the family of its first owner Joseph Brooks junior.

The family is known in the Liverpool area as far back as the 16th century and Joseph junior was the nephew of Joseph Brooks senior (1706-88). The latter was a pious non-conformist general builder, ropewalk owner, lime burner, timber and building merchant , and with his brother and partner, Jonathan (d. 1786), built among other things Liverpool's surviving 18th-century town hall. Joseph junior (1746-1823) was Jonathan's slave-trading son, being involved in forty-three such voyages between 1770 and 1790. He was also Bailiff of Liverpool in 1784 and 1802.
Back to Search Results
Buy a print License an image
Share:
Link copied to your clipboard!