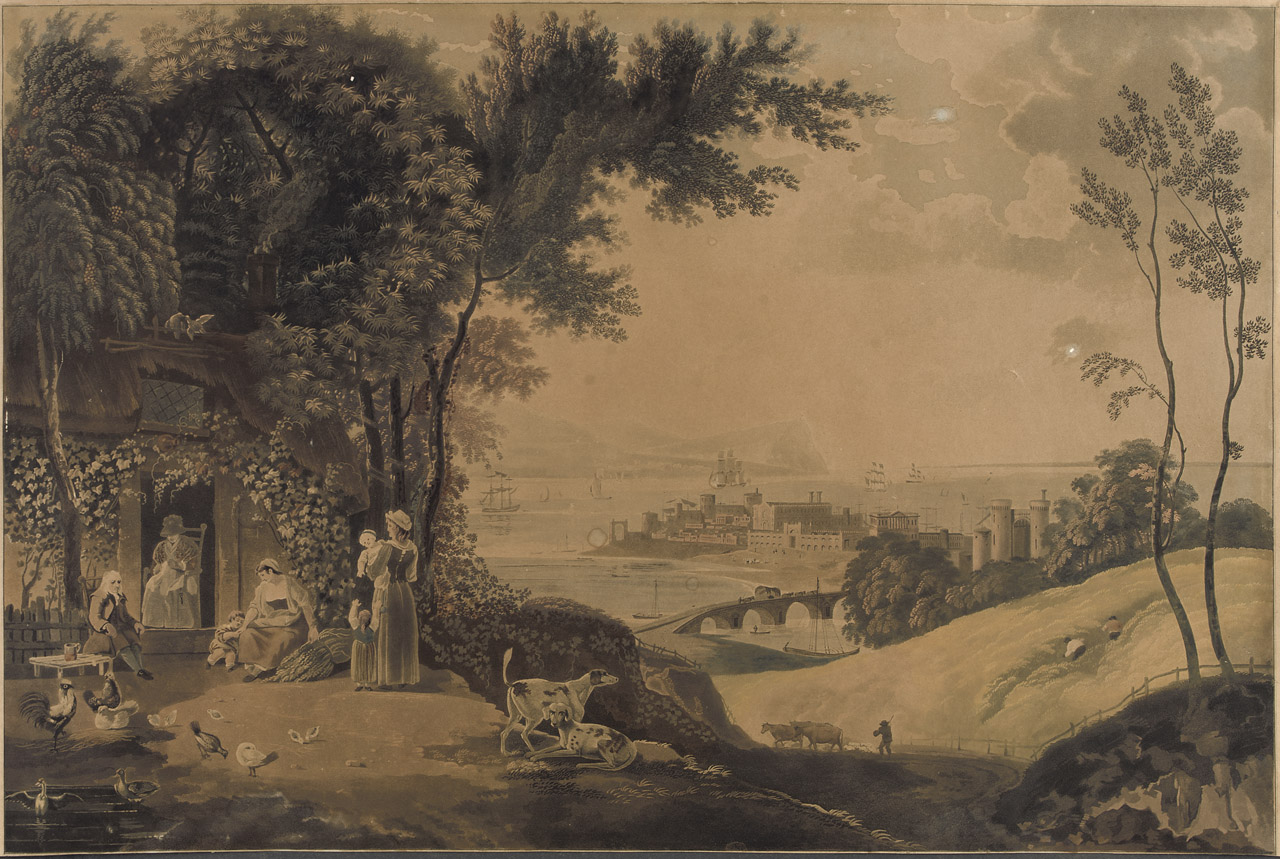 One of a pair of aquatints (the other of 'War' is ZBA4128) recording two large paintings by William Hodges, which were exhibited in London in December and January 1794-95 as centrepieces of a one-man show intended to recoup his financial fortunes in the period of disruption to the art market caused by the outbreak of the French Revolutionary War. Both are trimmed copies and originally had the titles 'PEACE' and 'WAR' centred below the image,with detailed descriptive text across two columns on either side. 'Peace' shows an imagined ideal landscape, with a contented peasant family round their cottage door and a seaport city prospering by maritime trade beyond. The other shows the same scene devastated by foreign invasion, with the figures credited to Thomas Stothard RA in a line under the image in untrimmed copies: in 'Peace', Hodges appears to have done his own. Both were a consequence of Hodges's aim to introduce 'moral purpose' into landscape painting but his plan catastrophically misfired in the context of the early years of war and contemporary fears of French invasion: rather than being seen as patriotically supporting the national war policy of the Pitt government he was regarded as backing the appeasement attributed to the Whig opposition. Despite his careful publicity and the production of these fairly elaborate prints intended for related sale, the show was a commercial failure and was closed down after HRH the Duke of York - fresh from his own unsuccessful command of an army in the Low Countries - and Prince William of Gloucester visited it and condemned Hodges's efforts: on this occasion the Duke (according to the diarist Joseph Farington RA) 'abused his pictures as being of a political tendency [,] expressing surprise that such pictures should be exhibited'. He particularly condemned them as showing 'Democratic principles', then (in effect) an accusation of treasonable thought. The result was that Hodges was forced to auction the contents of his exhibition, and other works, to a very poor return and retired with his family to Devon. There he invested in a banking venture that failed in a general financial crisis of 1797, and both he and his wife died within weeks of each other that year, leaving their children destitute. The scale of Hodges's failure is perhaps shown by the fact that no copies of the prints were known to survive until 2004, when the Museum was offered this pair by a London dealer at the time of its exhibition 'William Hodges 1744-1797: the art of exploration' and they were first exhibited in it (as ex-catalogue items, given their late appearance). The pair came in what appear to be original glazed frames, including the original letterpress pasted onto the backs of each frame, with supplementary scraps of newspaper as padding.

A better-preserved pair, similarly hand-coloured and with the title and full lettering below (560 x 750 mm) subsequently appeared on the London market in 2007 and is now in private hands: see Simon Macdonald: (1) ‘To “shew virtue its own image”: William Hodges's The effects of peace and The consequences of war, 1794–1795’, in the 'British Art Journal', vol. 9 no.1 (2008), 57–66 and (2) 'The Correspondence between William Hodges and William Hayley, c. 1793-1796' in 'Transactions of the Romney Society', vol. 16 (2011), pp. 14-27. (Hayley was a then well-known poet and friend of Romney, both being known for radical political sympathies.) Given that Hodges died on 6 March 1797 and the other set bears the issue dates of 22 April (Peace) and 26 December (War) 1797, he did not live to see their issue, presumably continued by Medland (publisher as well as engraver) because already in train and perhaps to help efforts for his family. By 1814 the original oils were in the changing stock (i.e. for sale) of the 'European Museum' in King Street, St James's Square, London, but are now lost.
Back to Search Results
Buy a print License an image
Share:
Link copied to your clipboard!