Skip to main content
You are here:
Home Discover our stories and collections Museum blog Guest post: Eccentric ideas for the discovery of Longitude

Guest post: Eccentric ideas for the discovery of Longitude

Various ideas had been proposed for centuries which claimed to offer a solution to the problem of discovering one’s longitude at sea. However, following the passing of the 1714 Act of Longitude and the potential award of £20,000 by the British Government, numerous more ideas were proposed by the public. Most of these were more eccentric than practical in nature. Five examples are outlined below:

Digby proposed that a wounded dog be placed on each ship. A bandage or knife associated with the wound would remain at the home port before being plunged into the ‘Powder of Sympathy’ at midday. The effect of the powder would cause pain in the dog’s wound thousands of miles away causing it to howl and thus providing a ‘canine time signal’ from which the longitude could be determined on the ship. The failings in the scheme speak for themselves! 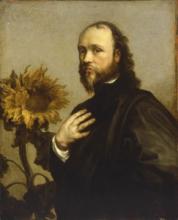 In fact, the powder of sympathy is now thought to be an early longitude satire, which Rebekah Higgitt explores in more detail in this blogpost.

The account that Fyler proposes is given through an imaginary dialogue between the author and a seaman whom the author hopes to lure away from the punch bowl, reforming him to become a water drinker like himself. In the pamphlet, the rector proposes that a series of stars in the night sky be mapped along a series of equidistant meridians. At an appropriate moment the sailor would observe which row is closest to his apparent meridian and compare this with the one that would be on the meridian at midnight at his reference longitude. The difference would allow his longitude to be calculated. All the measurements would, however, have to be done ‘on tiptoe’ because the stars will only stay at a point for a minute or two so a quick and speedy observation is required. The scheme fails on a number of accounts, including the need to know the time back at the Azores, his reference longitude, clear skies to observe stars and more astronomical data than existed at that time in all the world’s observatories.

Francis Haldanby, 1714, An Attempt To Discover The Longitude At Sea

Haldanby had noticed that if you are close to the equator and sailing northwest by the compass i.e. 45º to the latitude you will gain one degree of longitude for every degree of latitude. Since it is possible to measure and record a ship’s latitude, it would be possible to determine the longitude as well. He includes a grid in the pamphlet to provide similar ratios for other compass points of sail. Unfortunately, the proposal fails to take into account ocean currents and subsequent difficulties of holding a set course.

Pitot recognised that distances could be measured by a rolling wheel on land. Oceans are, like air, a fluid and not a solid as the earth is. Pitot therefore proposes that a windmill like device, called his ‘hydraulic automat’, could be used on a ship to measure movement in water and in effect the distance travelled. Unfortunately, ocean currents would render such a device ineffective, although Pitot claims that these are generally known and that later knowledge could improve upon them.

A proposal to determine our longitude. PBB2857

Jane Squire, 1743, A Proposal To Determine Our Longitude

This is the only known idea to be published by a woman under her own name. In a lengthy and complex proposal, Squire recognises that every point on the earth corresponds to a point on the celestial sphere. She suggests dividing the globe and sky into a million lozenges, or ‘cloves’ as she refers to them. In addition, she proposes that the reference longitude be plotted through Bethlehem and that ‘astral time’ be determined there in addition to accurate tables of local sunrise in order to compare the ‘astral time’ with local solar time. In effect, she proposed changing many of the basic principles and terminology of astronomy whilst a new system of numeration based on her ideas would be adopted internationally. Her ideas fail through a lack of recorded stars in the night sky, although Squire claimed that more would be discovered over the course of time and even that glasses would exist that would allow stars to be seen during the daytime! Her proposal also required a sufficiently accurate clock which didn’t exist at the time. Consequently, Squire believed that her ideas had been stolen when John Harrison was awarded funds to develop his marine timepieces by the Board of Longitude.

All of these eccentric ideas and their subsequent failures resulted in the idea of solving the longitude problem becoming synonymous with an impossible task, such as constructing a perpetual motion machine. In turn, this idea entered into elements of the contemporary culture.  Published in 1735, the final scene of Hogarth’s The Rakes Progress shows the interior of Bethlehem Hospital, or ‘Bedlam’, the institute which cared for individuals with mental health issues. Hidden behind a door, a crazed figure is drawing a diagram on the wall in an attempt to solve the longitude problem. The implication is clear; only madmen attempt to solve impossible problems. 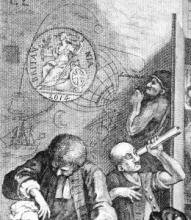 In his novel Gulliver’s Travels, published in 1726, Jonathan Swift makes a reference to longitude during Gulliver’s third voyage. When Gulliver engages in conversation with the immortal Struldbrugs, he reflects that, were he immortal, he would ‘see the discovery of the Longitude, the perpetual motion, the universal medicine, and many other great inventions brought to the upmost perfection’. Of these three, Longitude is the only to have actually been solved.