Skip to main content
You are here:
Home Discover our stories and collections Museum blog Just a second ...

Do you ever find yourself wishing that there were more hours in the day? If so, you may be comforted to know that Tuesday, June 30, 2015 will actually be a little longer than normal this year; not by hours, but a single second – a leap second.

This peculiar addition to our civil timescale is an occasional event that will normally occur at the end of June or December. Leap seconds are applied to correct for minor irregularities in the speed of the Earth’s rotation as well as the disparity between the lengths of an SI second and the true fractional part of our astronomical year. The announcement was made on January 5, 2015 by the International Earth Rotation and Reference Systems Service (IERS), who collate international observations of the Earth’s motion and judge when a leap second is required to keep our civil timescale in step with the Earth’s rotation. The IERS produce a biannual bulletin to broadcast whether or not a leap second adjustment will be made. These bulletins give just under six months' warning.

The story of the leap second is inextricably linked to the moon and therefore to the interests of the Royal Observatory, which after all was established to provide data to make navigation by lunar distance possible. Hints at the instability of the Earth as a timekeeper go back as far as the 17th century. In 1695 the talented astronomer and mathematician, Edmund Halley, inferred from his analysis of historic lunar eclipses that the lunar cycle had accelerated. This was later corrected by the German philosopher, Immanuel Kant, who proposed that the Earth may not be as stable a timekeeper as had been assumed and that tidal friction, caused by the moon’s attraction, was acting as a brake, slowing down the Earth’s rotation.

Edmond Halley, by Thomas Murray, about 1690 © The Royal Society

This understanding did not seriously impact on the business of timekeeping, for clock technology was a long way off the Earth’s stability as a timekeeper. It wasn’t until the early 20th century, with the development of clocks such as Shortt 16, that astronomers and scientists had a time standard that was, for the first time, more reliable than the Earth itself. The next 25 years saw a rapid development in precision timekeeping, firstly with the quartz clock, followed by the ground-breaking achievement of Louis Essen and Jack Parry, who successfully ran their caesium atomic clock at the National Physical Laboratory in Teddington, UK, for the first time sixty years ago. In Essen’s words, the new clock would eventually become the “death of the astronomical second and the birth of atomic time.” 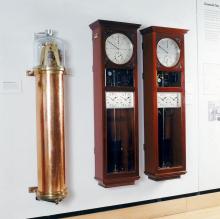 Shortt 16 was installed at Greenwich in 1927 and used for the Rugby rhythmic time signal© NMM (Ref. ZAA0544)

The 1950s was a pivotal decade in the story of modern timekeeping. The improvement of clocks for observatories and laboratories created a need for a better and internationally agreed time standard. In 1952, the International Astronomical Union (IAU) agreed that Ephemeris Time (ET) should replace time based on the astronomical day. The newly defined second was a fraction of a year rather than of twenty-four hours, which helped to reduce the errors caused by short-term accelerations and decelerations in the Earth’s rotation. ET was not without its complications. It required long periods of astronomical observation to compile the data for astronomical time determination using the next generation of astronomical instruments such as the Danjon astrolabe and Markowitz moon camera. The data used was derived from observations made up to the turn of the 20th century and was therefore representative of a period when the astronomical day was slightly shorter. The ET second became the SI standard in 1960 and was redefined as an atomic unit in 1967 according to the behavior of the caesium 133 atom. It is this redefinition, which is so critical to the leap second. The SI second is now over a century old and thanks, largely, to the moon's gravitational influence, is a little shorter than it needs to be for our time. Our atomic clocks run faster than our fundamental timekeeper, the Earth, and by the time the leap second is added on June 30, our civil timescale UTC will be 36 seconds slow of International Atomic Time (TAI). Thinking back to the time when the first leap second was added, our technology was rather different. In 1972 a modular computer, such as the HP 3000 would fill up the best part of a reasonably sized room and was advertised as being capable of handling up to 64 users with “several programs to be active simultaneously.”

Reportedly, the HP 3000 did not live up to its claims and the introduction of a leap second was likely to be the least of its problems. Today, however, it is a very different matter. With popular servers handling mind-boggling volumes of tiny information packets that each receive a time stamp as they make their way through the many gates between sender and recipient. An anomalous time stamp, reading 23h 59m 60s presents a logic problem that could cause a catastrophic crash. The reason that we only experience occasional network failures during the insertion of a leap second is because it is relatively easy to inform systems with a few lines of code that the last minute of the month will have an extra second. There are other ways of dealing with the leap second, such as Google’s leap smear approach, and some hardware has in-built capacity to handle the leap second, such as our HP 5071A atomic clock.

This year could see another milestone planted in the history of civil timekeeping as the International Telecommunication Union (ITU) plan to announce whether or not the leap second will be abolished at the World Radiocommunication Conference, to be held in Geneva in November, 2015. If the link between civil time and the Earth's rotation is broken and given that there is now 32 seconds difference between TAI and UTC, it is unlikely that we will notice the effects, but the legacy of abolition for our descendants will be an increasing disparity between civil time and mean solar time. If you are interested to read more and explore the leap second debate, the findings of the 2014 UK public dialogue are available here.

Shop
World Map Travelcard Holder
Add a touch of epic exploration to your daily commute with our Royal Museums...