Skip to main content
You are here:
Home Discover our stories and collections Museum blog Ships de luxe: design and the Mauretania, Lusitania and Aquitania

Ships de luxe: design and the Mauretania, Lusitania and Aquitania

Today's guest blog was written by Anne Massey, Professor of Design at Middlesex University. She explores the role of design and designers on board three ships; the Mauretania, Lusitania and Aquitania.

She'll be talking at our Maritime Lecture Series on 21 May.

These three splendid Cunard ships played important roles during the First World War, the Lusitania was sunk on 15th May 1915 and the Mauretania and Aquitania contributed sterling service towards the war effort, acting as troop ships and hospital ships. Mauretania continued to offer a speedy, trans-Atlantic service until 1934, when it was withdrawn from service. Aquitania also served the war effort during the Second World War, and was not withdrawn until 1950. 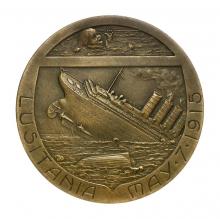 Medal commemorating the sinking of the Lusitania

But these ocean liners were originally conceived as ships de luxe – passenger ships which would offer the highest standard of luxury and passenger comfort. Their tremendous speed and stunning size were designed to attract passengers on the lucrative trans-Atlantic route.  For the first time, Cunard employed architects to design the interiors of these three ships, to add kudos to their offer and a sense of quality to the voyage.

1st class lounge of the Lusitania

The Mauretania and Lusitania were also the largest to be built at the time, at some 31,000 tons and 790 feet in length. Cunard was in competition with Germany at this point,  and after visiting the North German Lloyd liners in 1903 for an inspection of their interiors, were not suitably impressed: ‘They are of a type particularly unsuitable to the situation, which demands an absence of restless forms and refined richness of style. These decorations are bizarre, extravagant and crude, loud in colour and restless in form, obviously costly, and showy to the most extreme degree.’

Cunard had in mind something more elegant, more understated and more British. The interiors of the Mauretania were designed by Harold Peto and the Lusitania by James Miller reflected the fashionable taste of the time, with Louis XVI and Adam revival panelling, ornamentation and furniture.

The Aquitania was designed by Arthur Davis, who had previously worked for the German shipping lines, who followed the same de luxe fashions. All three ships were stripped of their fittings in 1914, repurposed for the war service.

Hear more about how the designers were recruited and used by the shipping line to create floating palaces at Anne's talk.