Skip to main content
You are here:
Home Discover our stories and collections Museum blog What’s in a name? HMS ‘Victory’ and the naming of ships in the long 18th Century

What’s in a name? HMS ‘Victory’ and the naming of ships in the long 18th Century

Prominently placed in the new ‘Nelson, Navy, Nation’ gallery is a ship model of the Victory. Visitors might expect this to represent Nelson’s Trafalgar flagship, but instead we chose to display an earlier vessel of the same name – built in 1737, and the fourth Royal Navy ship to be called Victory.

The model demonstrates the incredible complexity of an 18th-century naval ship, as well as the close-knit, isolated world in which officers and sailors lived. But its familiar name and unfamiliar history hints at another story: how and why ships were named. Throughout its history, the Royal Navy re-used names as ships left active service and were replaced with newer vessels. This was partly from necessity: as the navy grew, it began to run out of suitable names. During the Second World War the Navy’s vast expansion resulted in some curious naming decisions. In the 1940s, over 200 flower-class corvettes were built, among which were HMS Snowdrop, Tulip and Candytuft. These were hardly names to intimidate Britain’s naval rivals. However, ships could be named very carefully and deliberately, particularly in the 18th century, and the names chosen tell us much about the Navy of the time.

In the early 18th century, naval ships were named in one of two ways: either after royalty, or after an English locality. Of the ships built in the 1700s, the largest were named after monarchs, their relatives or their palaces: Royal Sovereign, Royal Anne, Royal George, Prince George, Royal Oak, Royal William, Elizabeth, Restoration, Mary, Royal Katherine, and Hampton Court. The remaining ships were almost always named after English towns, counties or rivers: London, Northumberland, Nottingham, York, Devonshire, Chichester, Cornwall, Kent, Suffolk, Essex, Cambridge, Oxford, Shrewsbury, and the Humber. 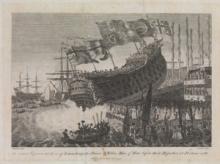 The 'Prince of Wales'

As the Navy grew in size across the 18th century, there was marked transformation in how ships were named. Many of the larger naval ships continued to be named after royalty, notably Royal Sovereign (1786), Prince of Wales (1794) and Queen Charlotte (1810). Increasingly common though were ships named after creatures, gods and protagonists from classical antiquity. At the Battle of Trafalgar in 1805 the British fleet included Neptune, Agamemnon, Ajax, Orion, Minotaur, Spartiate, Mars, Bellerophon, Colossus, Achille, Polyphemus, Euryalus, Naiad and Sirius. How much this was a deliberate policy is unclear, but it offers a fascinating window into the reading habits of the period’s naval administrators.

The second development was the emergence of a more patriotic naming policy. After the Act of Union in 1707, the Admiralty quickly renamed two ships Edinburgh and Glasgow to help incorporate the Scottish into the British Navy. A few years later, Britannia became the most obvious of national symbols, followed by Union in 1726. Ships were increasingly given titles that resonated with characteristics deemed ‘British’: Dreadnought, Conqueror, Dragon, Superb, Albion, Hero, Illustrious, Valiant, Revenge, Defiance, Thunderer, and Defence. The Navy also ensured that captured French ships were added to its own naval ranks with the same name, though often anglicised.  There were few more dispiriting sights for a French naval officer then seeing a captured vessel in an opponent’s battle line.

The Launching of the 'Nelson' at Woolwich

By the end of the century there emerged a conscious effort on the part of the Navy to use ships to promote the service’s own heroes. Naval commanders such as Nelson, Rodney, Howe, Barham, Duncan, Anson and Benbow lent their names to the largest, most powerful and awe-inspiring vessels. Other vessels were given names that acted as reminders of the Navy’s glorious history, such as Barfleur and Trafalgar. In this way, the naval ship became a reference point for the Navy’s glorious institutional history, an act of self-promotion in a period when the army was receiving increasing public attention. This was most evident at the launch of the Nelson in 1814, two months after Napoleon’s surrender to the allied armies in Northern Europe. The launching was a gala affair with the royal family in attendance, and over 20,000 spectators. The Nelson was described in one newspaper as being ‘superb and stupendous, of immense magnitude and exciting admiration’. Here was a technological wonder, a patriotic symbol, but also an object of naval propaganda the like of which had not been seen before.

Given this broader history, the name Victory poses something of a problem, particularly when we consider its earlier incarnations. The second vessel named Victory saw long service, fighting in numerous battles during the Anglo-Dutch Wars before being decommissioned in 1691. The Royal James was quickly renamed Victory to continue the name in service, though its subsequent history was less propitious. This third Victory was partly destroyed by an accidental fire in February 1721 and was subsequently broken up. The fourth was wrecked in 1744 only seven years after it was built. It was thought for some time that the model of this ship that is now displayed in the National Maritime Museum was built to attempt to understand what failing in the fabric of the ship had caused it to sink. Subsequent research suggests that the model was ordered in 1740 for display in the Navy boardroom to advertise a fine piece of naval architecture. 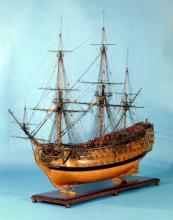 Over 20 years would pass before a naval ship was again named Victory. When in 1765 the Navy began to consider the options for the new first-rate ship being built at Chatham there were alternatives far more auspicious than Victory. However, as a name it was simple, direct, and made a clear statement about the nation’s superiority at sea. Britain had recently won a war notable for its ‘year of victories’, many of which owed entirely to the Royal Navy. Perhaps this is why the name was chosen. Whatever the reason, we hope that the model that stands in the Museum’s new naval gallery shows there is more to a ship’s name than meets the eye.

Shop
Mini HMS Victory Model
This mini ship model is a replica of the HMS Victory....