The National Maritime Museum’s Caird Library and Archive holds many fascinating documents relating to the Women’s Royal Naval Service during the First World War. Among the pictures of women confidently assuming the roles of motorcycle despatch rider, mine-net worker, navy cook or wireless telegraphist, is a collection of typewritten letters on cheap paper that pre-date the formation of the WRNS. At first glance, these do not look particularly promising.

The letters were written by Katharine Furse, Commandant-in-Chief of the Voluntary Aid Detachments (VAD) for the British Red Cross. Furse writes of her growing dissatisfaction with her role in the VAD and her desire to pursue a role supporting the armed services. This is something she was unable to do in tandem with her Red Cross work, because of its non-combatant status. Throughout the correspondence, rumours of newly created war-time roles are discussed amongst the women in Furse’s social milieu. She forcefully pursues every suitable opportunity, from running army canteens to managing the mobilisation of the new Women’s Auxiliary Army Corps.  Furse also makes recommendations to the government about the best recruiting strategies for women’s war work. 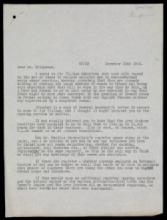 Letter from Katharine Furse regarding the recruitment of women for war work, December 1916.

She reveals her disappointment on more than one occasion that she is overlooked for plum roles. A letter to Neville Chamberlain dated January 15th 1917 demonstrates Furse’s frustration that she has not been appointed to a leadership role in the WAAC. She confidently reiterates her willingness to work alongside the armed forces, enclosing her CV which states that she has a private income and would not therefore require a salary. 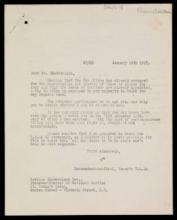 From our collection it is clear to see the lengths that Furse was prepared to go to in order to position herself for leadership when rumours first surfaced of the formation of a Women’s Royal Naval Service. She writes passionately and persuasively about the qualities she could offer her country in a time of war. Furse also offers her vision for the service and how it would complement and support the Royal Navy at a time when it was suffering from a manpower shortage. Needless to say it is with great satisfaction that she is able to write to her peers in October 1917 informing them that she has been appointed as Director of the Wrens, a position which she started the following month. The  Wrens event on Monday 9th March will showcase some of these early letters, as well as a number of documents, pamphlets and photographs showing how the service thrived under Furse’s Direction.

Shop
Women and the Royal Navy
As nurses, 'Jenny Wrens', and above all as wives and mothers, women have...

Shop
WRNS - The Women`s Royal Naval Service
From cooks and clerks to weapons analysts and air mechanics, generations of...