Astronomers Hannah Banyard, Greg Brown, Emily Drabek-Maunder from the Royal Observatory pick their space and astronomy highlights for the year ahead.

There may be dozens of meteor showers each year, but with most having very low rates, only a handful are worth your time. The first of these is the Quadrantids meteor shower, a very high rate shower that is already in full flow when January begins. Peaking on the night of 2 January and the morning of the 3rd, you may be able to see up to a meteor every minute or so, many of them especially bright ones known as fireballs. 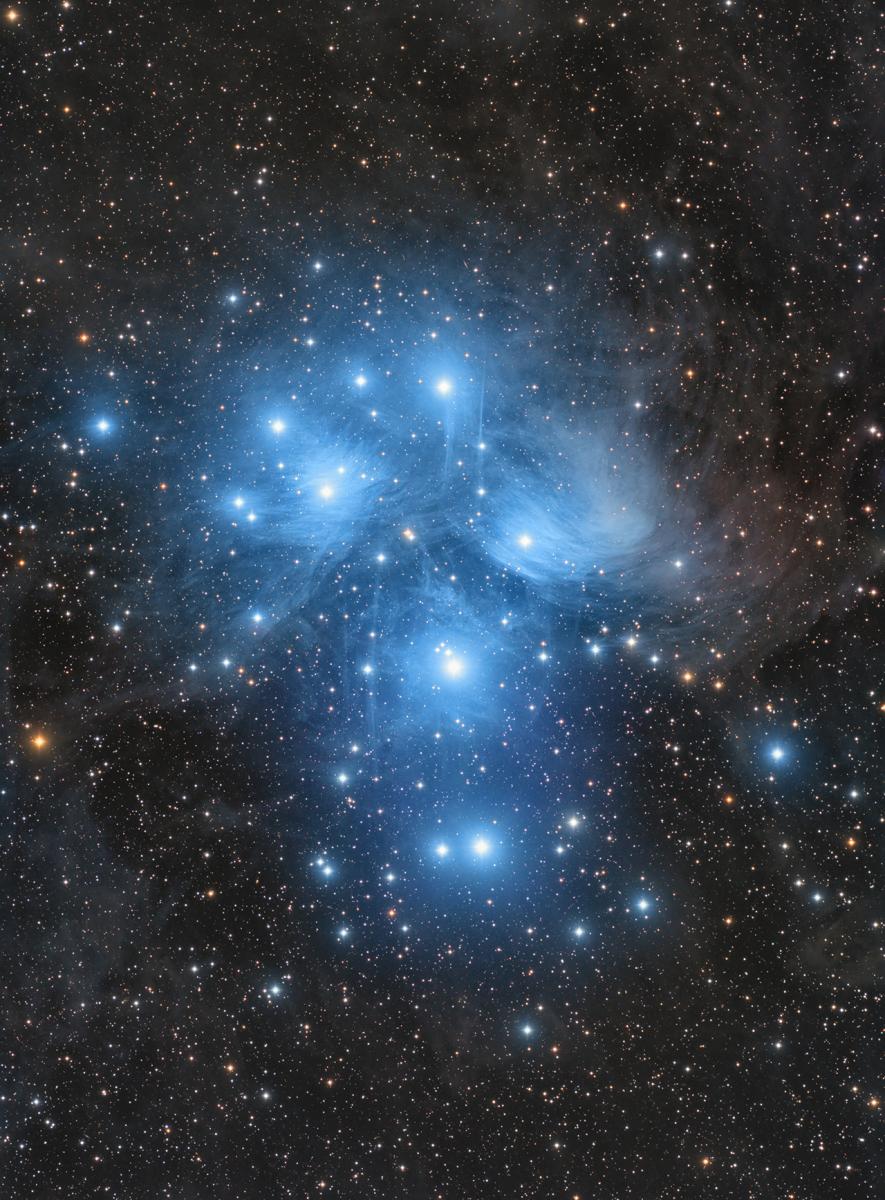 2. The deep sky in winter

On 11 February, there will be a New Moon, which means the Moon won’t be visible in our night skies. Without the light of the Moon, this is the perfect time for stargazing. Deep-sky objects to keep an eye out for include the Pleiades and the Andromeda Galaxy. The Pleiades, sometimes called the ‘Seven Sisters’ is a cluster of stars easily visible towards the South just after sunset even from light polluted cities. The Andromeda Galaxy can be seen towards the West just after sunset near the Andromeda constellations. If you are in a dark area away from city lights, this galaxy can actually be seen with the naked eye!

18 February means touchdown for NASA’s latest Mars rover, Perseverance and helicopter, Ingenuity. The 4x4 sized mobile science lab will employ a complex landing sequence featuring a skycrane. A series of cameras on the rover will record the event so you can marvel at this real feat of engineering taking place on another planet! Perseverance will study Martian soil for past and present signs of life and test out new technology for future human missions.

Have you noticed that there are times during the year when the days are longer? And other times of year when night never seems to end? These changes in the length of day and night are caused by the tilt of the Earth.

In May, NASA’s OSIRIS-REx mission will begin its two-and-a-half-year journey back home after its rendezvous with asteroid Bennu. The spacecraft has collected samples from the surface of the asteroid and stored them to be safely returned for study back on Earth where scientists hope to learn more about the early formation of the solar system and if there are any organic compounds key for life. 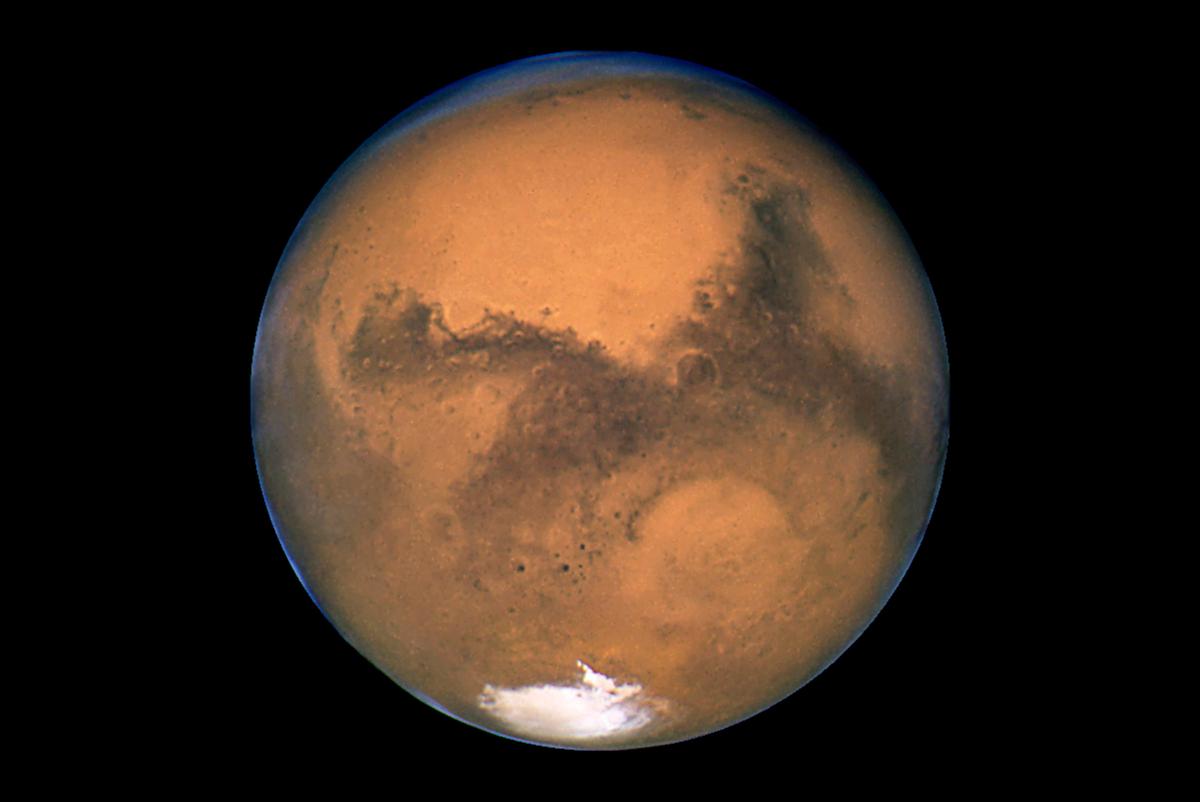 China’s Tianwen-1 mission of a Mars orbiter, lander and rover will take an exciting development as the lander and rover are due to land on the Red Planet in April. If successful, the China National Space Administration will be the second space agency after NASA to land a functional mission on Mars. The mission aims to seek out pockets of subsurface water and lay the foundations for a potential sample return mission to Earth.

If you want an easy astronomical object to spot, then take a look at the Supermoon on the night of 26-27 April. Supermoons occur because the distance between the Moon and the Earth changes over time.

The Moon’s orbit around the Earth isn’t perfectly circular, it is shaped like an ellipse. When the Moon is closest to the Earth on the same night as a Full Moon, it is known as a Supermoon. While Supermoons happen every year, the Moon can appear up to 14% bigger and 30% brighter and so well worth a look! 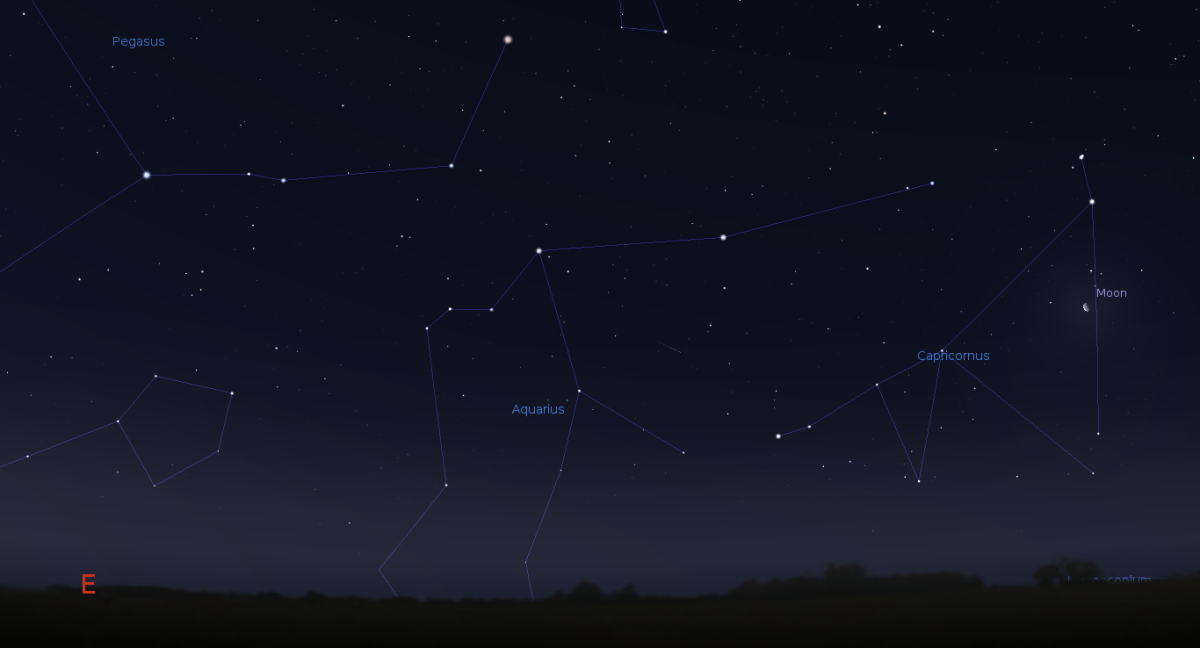 The next decent shower this year is the Eta Aquariids. Not as prolific as the Quadrantids, it is still worth a watch, as it has a broad peak of activity for the week centred on 4 May. Coming from debris left behind by Halley’s Comet, its meteors often produce long streaks of light, or trains, that persist for several seconds. 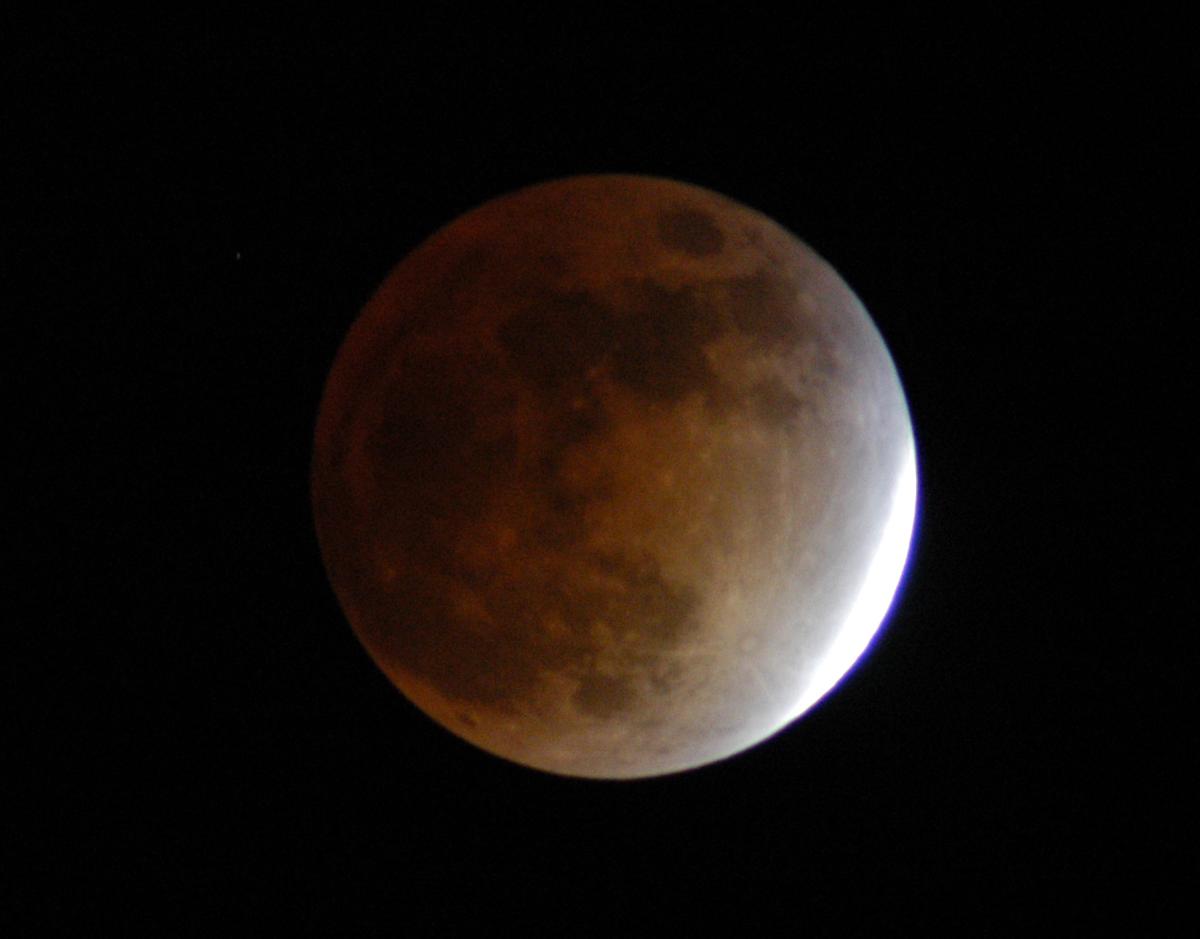 Don’t worry if you miss the Super Full Moon in April, there will be another bright Supermoon you can catch on 26 May. For those of you outside the UK and Europe during this Supermoon, you might actually be able to see a total lunar eclipse on this night. In Southeast Asia, Australia, South America and the United States, this Supermoon will also be a Blood Moon, or lunar eclipse. Lunar eclipses occur when the Sun, Earth and Moon line up so that the Earth casts a shadow on the Moon. The Moon doesn’t completely disappear, but ends up turning a dark reddish colour.

On 10 June, spot a partial solar eclipse in June where the moon obscures part of the sun. Beginning just after 10am and lasting two hours, the moon will block out almost 20% of the solar disk around maximum eclipse at 11.13am.

Safely observe the event with eclipse glasses or by making your own pinhole camera. In other parts of the world, this will be an annular eclipse where the apparent size of the moon is too small to cover the entire solar disk so a bright ring of the sun will appear around the moon. 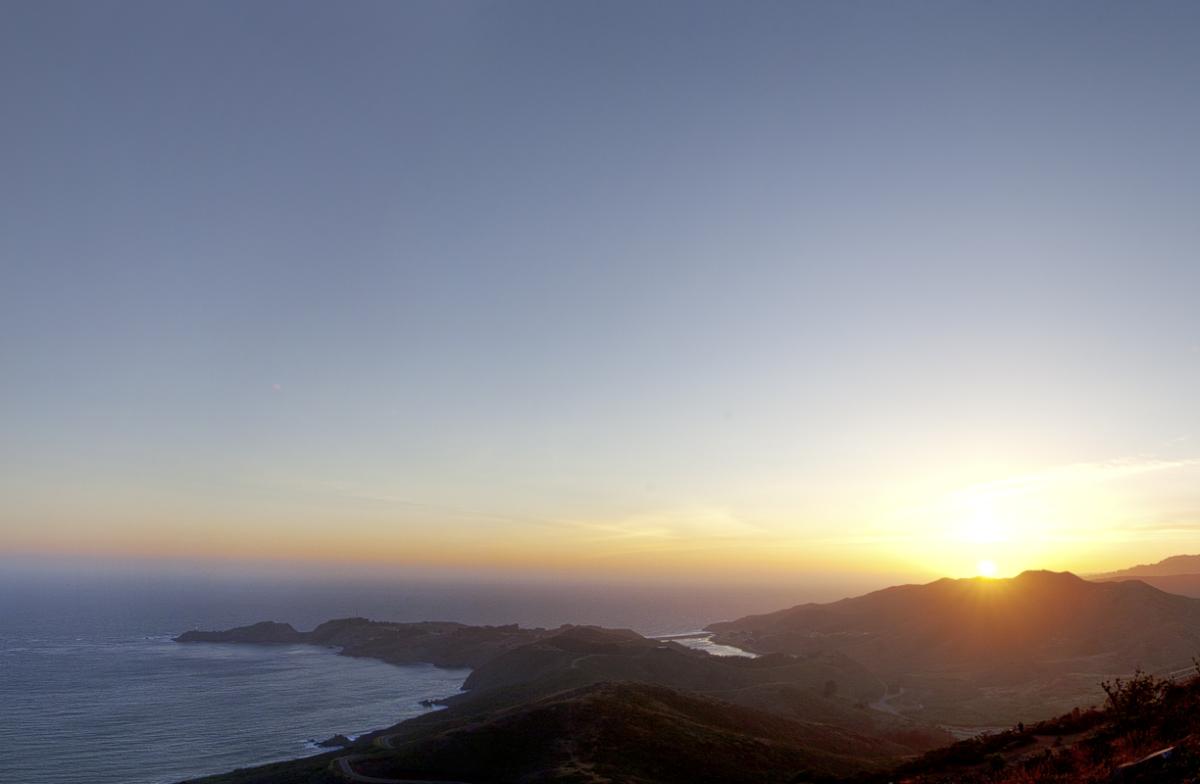 If you feel like there are endless hours of daylight or it happens to be night all the time, then chances are we are near to one of the solstices. Solstices occur the moment the Northern and Southern Hemispheres are most tilted towards or away from the Sun. For all of us in the Northern Hemisphere, the Summer Solstice will be on June 21st. Daylight on the Summer Solstice for London will be over 16.5 hours! The Winter Solstice will be on 21 December. The Winter Solstice marks the longest night of the year, where there will be slightly less than eight hours of daylight! 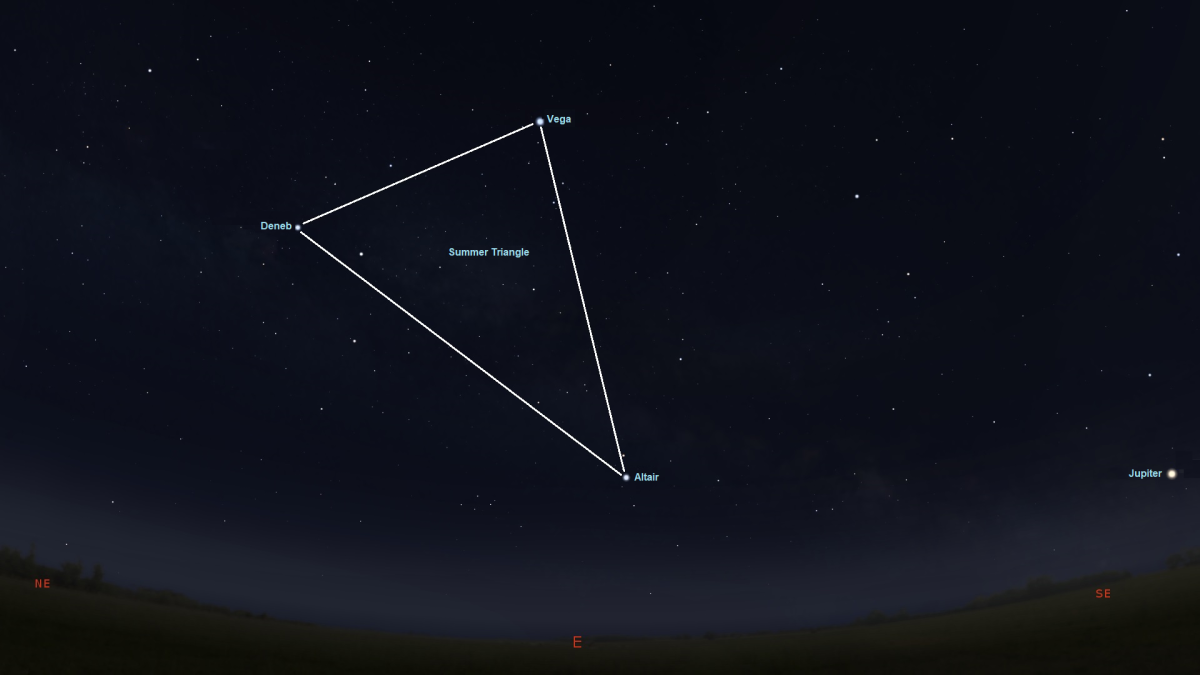 Summer skies can be particularly challenging for stargazers due to longer days. However, one thing that is easier to spot is the Summer Triangle asterism. An asterism is a simple pattern of stars, similar to a constellation. The New Moon will be on 10 July, which means that the skies will be a little bit darker for easier stargazing. If you go out after 10PM, the Summer Triangle can be spotted towards the South, made up of stars Deneb, Vega and Altair that together make the shape of an upside-down triangle. These stars also make it easier to spot the light coming from our own galaxy, the Milky Way. The Milky Way runs through stars Deneb and Altair. 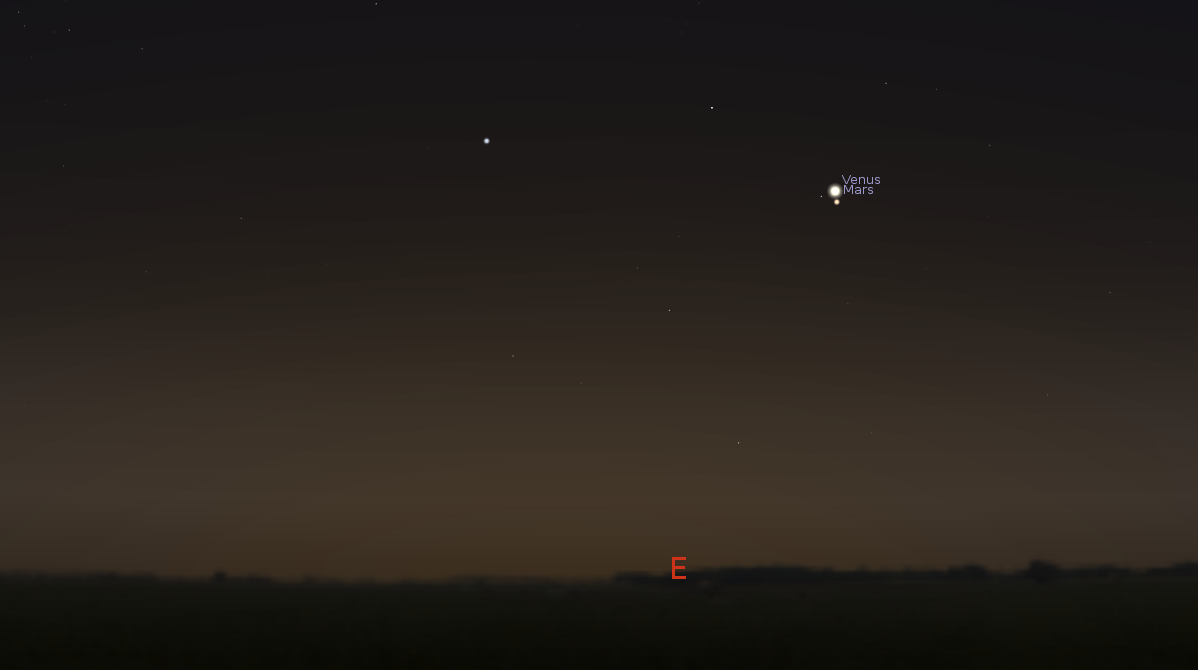 13. Conjunction of Mars and Venus

In the Summer, our two closest planetary neighbours will appear together in the sky when Mars and Venus are in conjunction on 13 July. Typically, a conjunction is where two celestial objects look close to one another in the sky, ie when they have the same right ascension or ecliptic longitude. The angular separation between Mars and Venus will be so small though that they will appear as a single object. Try to catch the pair just after sunset in the West where they will be very low to the horizon.

All good things must come to an end and July will see NASA’s hugely successful Juno mission finish as the spacecraft is deorbited and plunged into Jupiter to be destroyed to avoid contaminating any of Jupiter’s moons that may host life. Juno has already succeeded in revealing details of Jupiter’s gravitational and magnetic fields in its efforts to shed light on the formation and evolution of the gas giant.

Find out more about the mission

Late summer brings with it another excellent meteor shower, the Perseids. A favourite amongst those astronomers who aren’t so keen on the having to wrap up warm part of stargazing, this shower peaks around 12-13 August. Though the night may be a little short, you may still be able to see up to a meteor a minute at peak. As an extra bonus, the Moon will be a thin crescent, so natural light pollution will be at a minimum. 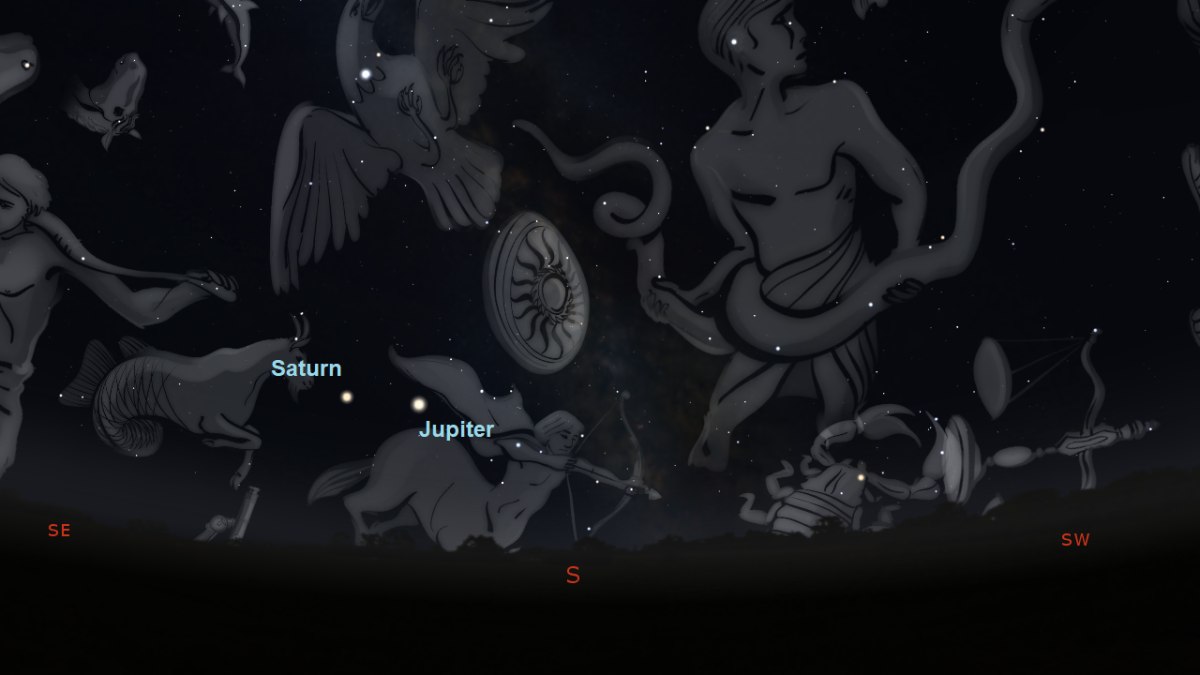 Following Jupiter’s overtaking of Saturn in the sky in December last year, it will be Saturn that comes to opposition first on 2 August, with Jupiter shortly after on the 19th. At opposition, a planet is on the direct opposite side of the Earth from the Sun. During this time, the planets will be around the closest they get to Earth, will be brightly illuminated by the Sun, and will be in the sky all night, so this month is the best time to see these giants in our solar system.

While the Moon may not actually be turning blue, make sure to take a look at the Blue Moon on 22 August. This Full Moon will be a Blue Moon because it is the third Full Moon in an astronomical season. Astronomical seasons are defined by the time between equinoxes and solstices - there are roughly four astronomical seasons every year. Between the Summer Solstice (21 June) and the Autumn Equinox (22 September), there happen to be four Full Moons. The Full Moon in August is the third of those four Full Moons, which means it is the Blue Moon. Even though ‘once in a Blue Moon’ might mean that something is rare, Blue Moons actually happen every two or three years. 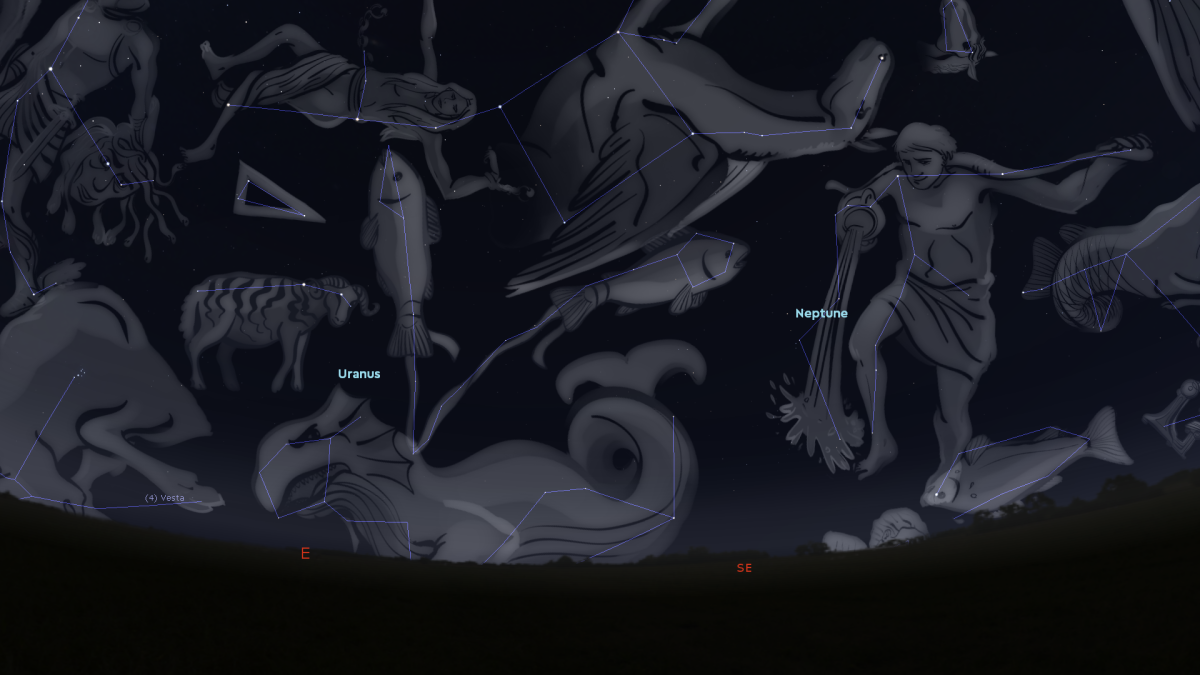 While Jupiter and Saturn are easily naked eye objects at any time, you would struggle to see Uranus with the unaided eye at even its best, and for Neptune you have no hope whatsoever. But, if you have a pair of binoculars or a small telescope, then the oppositions of Neptune on 14 September and of Uranus on 5 November are your best times to try and see them. These planets move so slowly in our sky that they will be about as bright and easy to see for a month or so centred on these days. 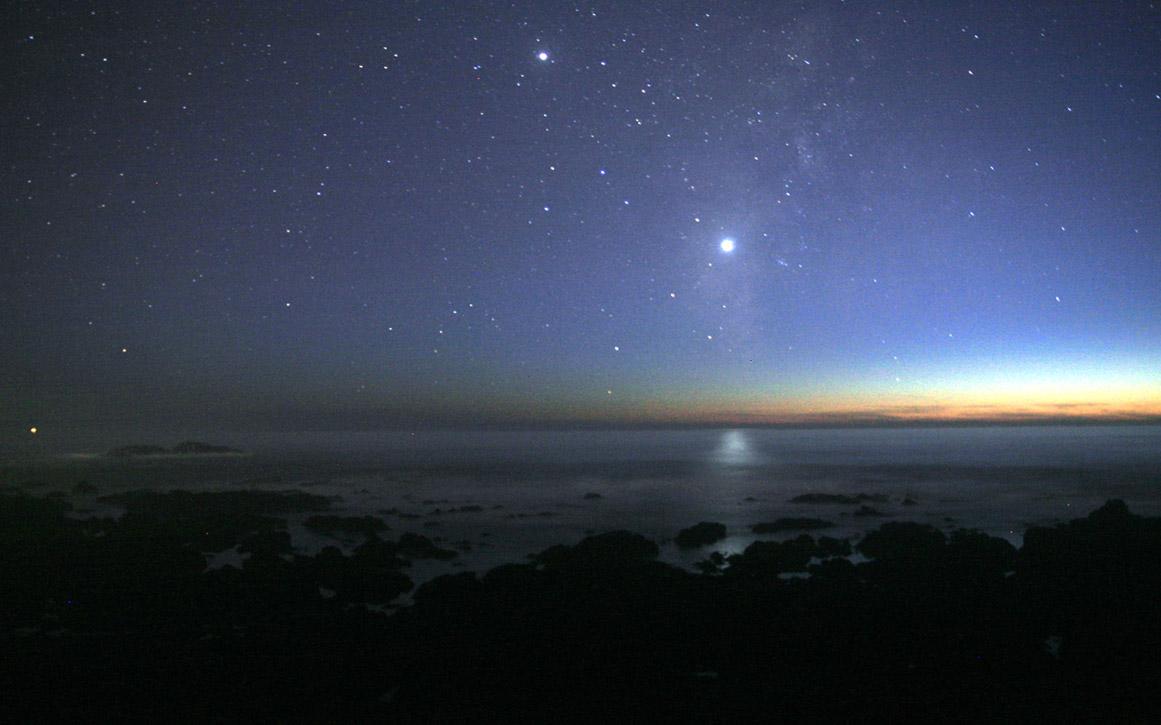 Sometimes the ‘morning star’, sometimes the ‘evening star’, in reality not a star at all, when visible, Venus is usually second in brightness only to the Moon in our night sky. As an ‘inferior planet’, one closer to the Sun than Earth, Venus never comes to opposition. Instead, its arguably most visible time is when it is farthest from the Sun in our sky, called its greatest elongation. On 19 October, Venus will be as far east of the Sun as it will get all year, appearing as a bright point of light in the evening sky just after sunset. Don’t worry about looking for it though, it will be hard to miss!

Just as the year began, it ends with another magnificent meteor shower. With the highest average rate of the year, this is one to watch out for! Peaking on the night of 13 December, this is one of a few showers produced by the debris from an asteroid rather than a comet. The materials these meteors are made of work like fireworks, producing surprisingly strongly coloured bursts of light, an excellent way to end the year. 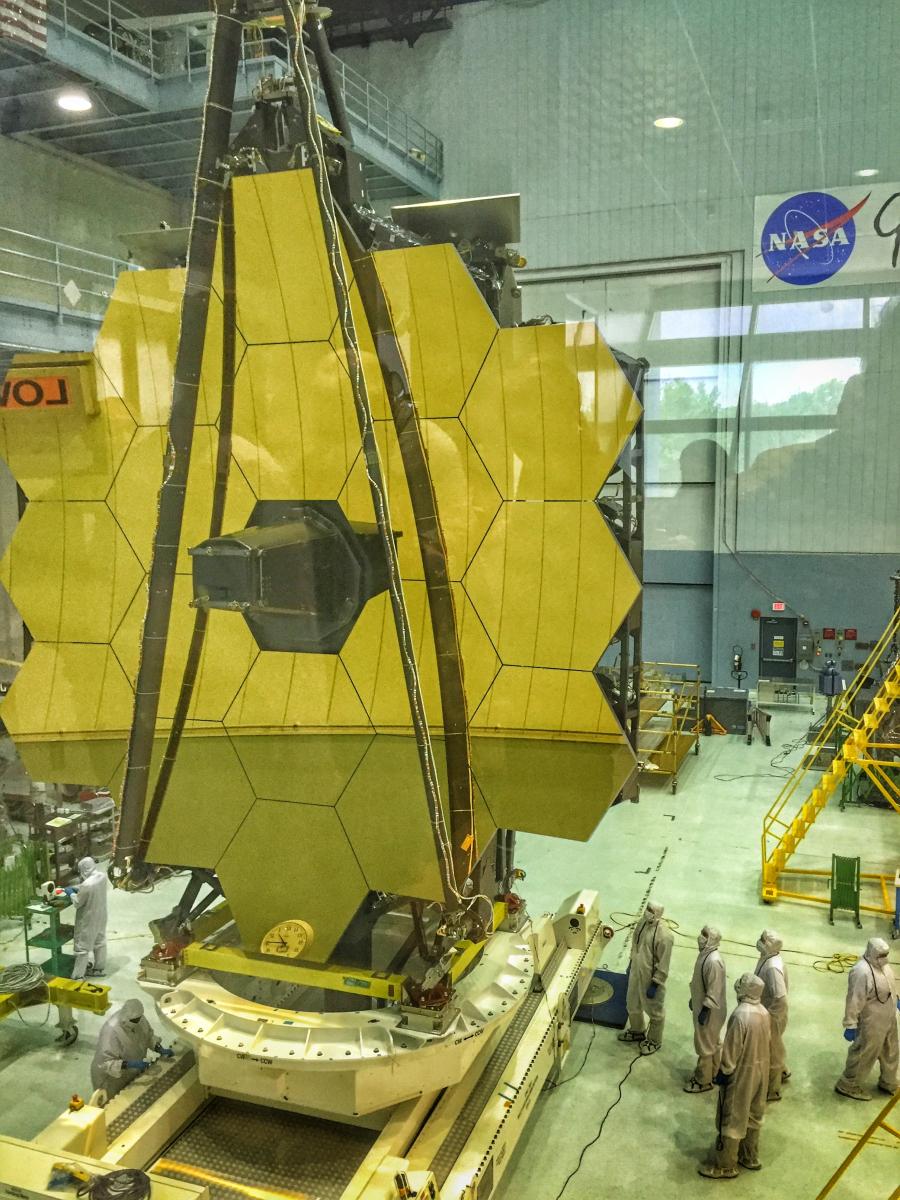 Successor to the Hubble Space Telescope, the James Webb Space Telescope (JWST) is due to launch on 24 December after many years of delays. The new telescope will have a mirror capable of collecting over six times the amount of light than Hubble can, meaning it will see more and see further. JWST will also see in different wavelengths of light than Hubble, making use of the infrared part of the electromagnetic spectrum, giving us brand new views into the Universe!