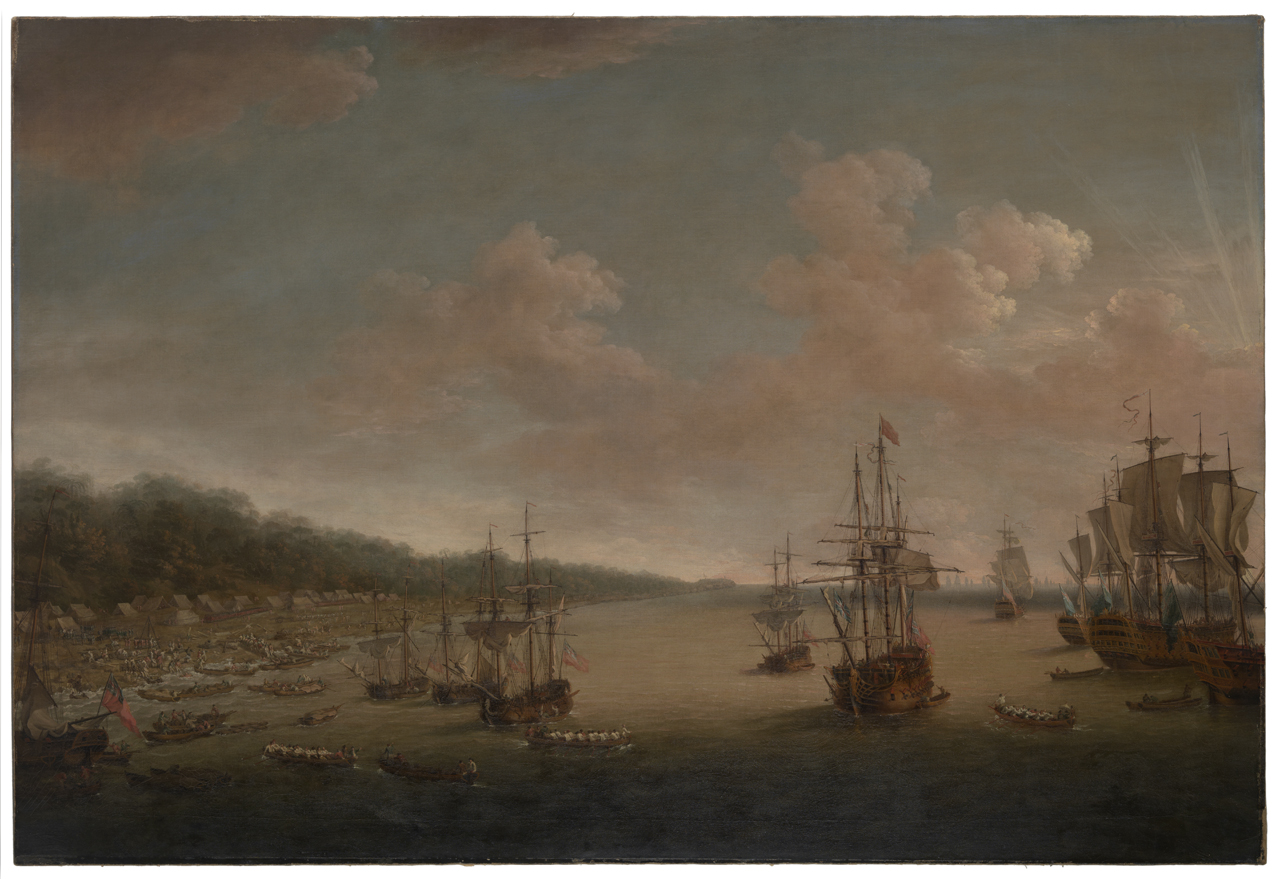 A depiction of an episode from the last major operation of the Seven Years War, 1756–63. It was part of England’s offensive against Spain when she entered the war in support of France late in 1761. The British Government’s response was immediately to plan large offensive amphibious operations against Spanish overseas possessions, particularly Havana, the capital of the western dominions and Manila, the capital of the eastern. Havana needed large forces for its capture and early in 1762 ships and troops were dispatched under Admiral Sir George Pocock and General the Earl of Albemarle.
The force which descended on Cuba consisted of 22 ships of the line, four 50-gun ships, three 40-gunners, a dozen frigates and a dozen sloops and bomb vessels. In addition there were troopships, storeships, and hospital ships. Pocock took this great fleet of about 180 sail through the dangerous Old Bahama Strait, from Jamaica, to take Havana by surprise. Havana, on Cuba's north coast, was guarded by the elevated Morro Castle which commanded both the entrance to its fine harbour, immediately to the west, and the town on the west side of the bay.

A landing was made without opposition six miles east of the castle on 7 June. On 1 July the 'Cambridge', 80 guns, 'Marlborough', 70 guns, and 'Dragon', 74 guns, were ordered to bombard the castle but were driven off with heavy losses, including Captain Goostrey of the 'Cambridge'. On 30 July a breach was made with mines in a wall of the castle and it was taken by storm. After its capture the fall of Havana was inevitable and took place on 11 August the town being occupied on the 14th. In addition to stores and valuables, nine Spanish ships of the line were captured.

This painting shows the encampment of the British troops at Cojimar Bay, after landing some six miles east of Morro Castle on 7 June, in preparation for the siege. To the left are the rows of tents of the British camp, with boats moving to and fro between storeships and elements of Pocock's fleet (flying blue on the right). It is part of a series of pictures painted by Dominic Serres (of which the Museum holds 6 out of 14 identified) to illustrate the principal events of the campaign for the Keppel family, of whom three distinguished brothers served at Havana: George Keppel, 3rd Earl of Albemarle (1724-72) was the army commander-in-chief; Commodore the Hon. Augustus Keppel (1725-86), who was naval second-in-command and Colonel the Hon. William Keppel (1727 -82), who directed the storming of the Morro Castle. The series consists of two groups, six larger paintings with naval emphasis, and five smaller ones (including this) which focus more on the army and the town. It is assumed that the naval ones were painted for Augustus, and the others either for George or William.