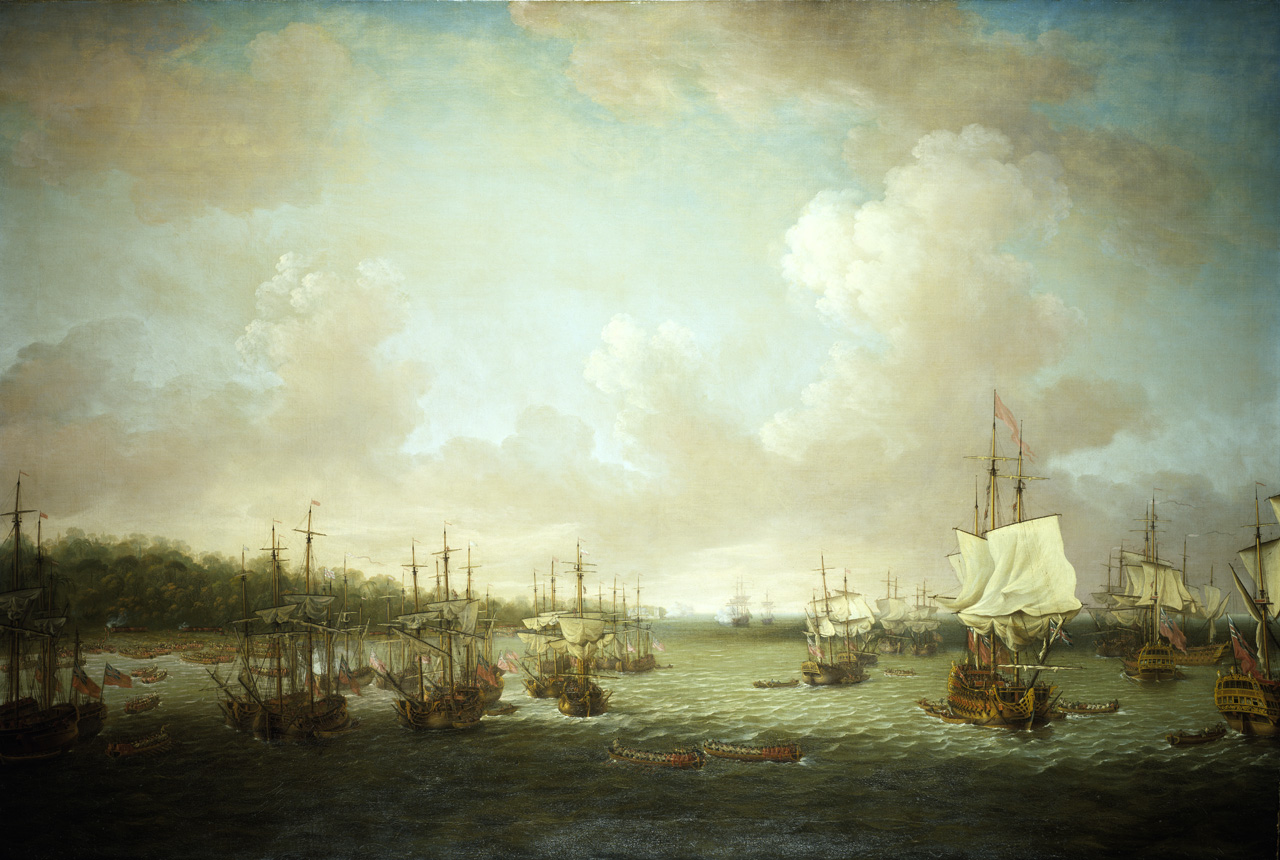 A depiction of an episode from the last major operation of the Seven Years War, 1756–63. The Capture of Havana was part of England's offensive against Spain when she entered the war in support of France late in 1761. The British Government's response was immediately to plan large offensive amphibious operations against Spanish overseas possessions, particularly Havana, the capital of the western dominions and Manila, the capital in the east. Havana needed large forces for its capture and early in 1762 ships and troops were dispatched under Admiral Sir George Pocock and General the Earl of Albemarle. The force that descended on Cuba consisted of 22 ships of the line, four 50-gun ships, three 40-gunners, a dozen frigates and a dozen sloops and bomb vessels. In addition there were troopships, storeships, and hospital ships. Pocock took this great fleet of about 180 sail through the dangerous Old Bahama Strait, from Jamaica, to take Havana by surprise. Havana, on Cuba's north coast, was guarded by the elevated Morro Castle which commanded both the entrance to its fine harbour, immediately to the west, and the town on the west side of the bay.

Serres’s painting shows the British fleet landing Lord Albemarle's troops on 7 June, at Cojimar Bay about six miles east of the Morro Castle. On the left, the wooded coastline forms a backdrop to the scene, stretching into the background towards the centre of the composition where ships are engaging the small castle of Cojimar, defending the bay. Commodore Keppel, in the 'Valiant', was in charge of the landing and this is the ship on the right flying his red swallowtail commodores pennant. On the left are a group of Royal Naval transports. The clouded sky allows for a dramatic play of light and shade on the water and the English vessels landing their troops and equipment in the foreground, adding a sense of action as well as physical depth to the picture space.

The painting is at least loosely related to a series of 12 prints published after a similar set of smaller paintings by Serres, themselves made from drawings by Lieutenant Philip Orsbridge, who had taken part in the action. Orsbridge chose Pierre Charles Canot and James Mason as engravers. Plate V of the print series shows the same action rendered in a similar composition.

Serres was a well-born Frenchman from Gascony who ran away to sea in merchant service rather than follow the family wish that he enter the Church. He probably arrived in England as a naval prisoner of war, took up painting and settled there. His early paintings show the influence of Brooking and Monamy's interpretations of Dutch art but he rapidly achieved recognition for his more documentary visual accounts of sea actions of the Seven Years War, 1756-63, becoming established as England's leading marine painter. His work was even more in demand in the 1770s and 1780s, recording the naval history of the American Revolutionary War. In 1768 Serres was a founder member of the Royal Academy and at the end of his life its librarian. A well-respected and sociable man, he was appointed Marine Painter to George III in 1780.
Back to Search Results
Buy a print License an image
Share:
Link copied to your clipboard!