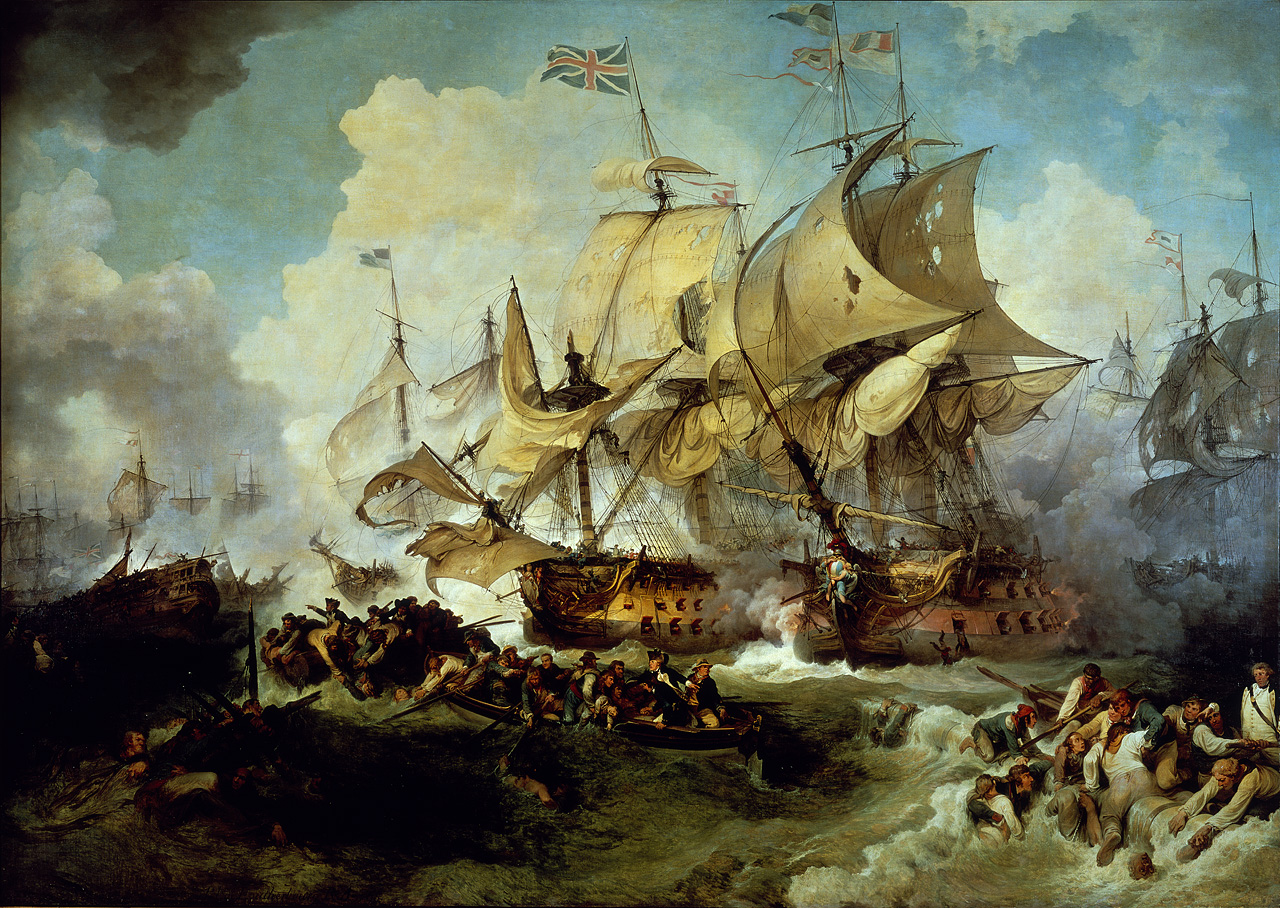 (Updated, August 2015) 'Earl Howe's Victory over the French Fleet' (its original exhibited title) is an interpretation of the first major fleet battle of the French Revolutionary War, 1793-1802. The French admiral, Rear-Admiral Louis-Thomas Villaret-Joyeuse, had sailed from Brest to intercept a valuable grain fleet from America, vitally needed in famine-stricken France. The English commander-in-chief, Lord Howe, sailed with the Channel Fleet to intercept the convoy, which neither side in fact encountered and which reached Brest in safety. Instead the two battle fleets made contact on 28 May, some 365 nautical miles (673 km) off Ushant, Brittany.

In the opening engagement Howe disabled the three-decker 'Révolutionnaire', 110 guns. On 29 May he cut the French line to leeward and for the next two days the fleets manoeuvred in fog and out of contact until Howe brought the French to full action and defeat on 1 June approximately 225 nautical miles (416 km) further west. Six French ships of the line were taken and one sunk.

Using man's heroic struggle against the sea itself to enhance the conflict of the opposing fleets, the artist's response is in the Romantic tradition, depicting both the dramatic and human nature of the event. There are several main themes, the duel between the opposing flagships 'Queen Charlotte' (Howe, centre left) and the 'Montagne' (Villaret-Joyeuse); the sinking of the 'Vengeur du Peuple', 74 guns, and the attempts to rescue her crew, with French sailors in the right foreground clinging either to one of her spars, or top-hamper lost overboard by other ships. Alongside this to the right is an English boat with a lieutenant standing in it and the English crew helping the Frenchmen aboard. In the left foreground sailors cling to another floating spar. Beyond this and in the left centre foreground two more English boats rescue drowning Frenchmen, with a fourth in the extreme left of the picture. In the left background is the sinking 'Vengeur', port-broadside view, and beyond her above the smoke the topsails of other ships.

The struggle between the two flagships locked in battle dominates the centre of the composition, with the French 'Montagne', 120 guns, on the right and the 'Queen Charlotte', 100 guns, flying the Union flag of Howe on the left, both in port-bow view. The effect of the British fire can be seen in the confusion aboard the French ship with bodies falling from her gun ports. The 'Queen Charlotte' has lost her fore-topmast which resulted in her dropping astern of the 'Montagne', which thus escaped capture. This loss in fact occurred while Howe's ship was well astern of the 'Montagne', which she never managed to engage in the position shown by de Loutherbourg. This reportedly led to disapproval of the picture by Lord Howe and more so by his Master of the Fleet, James Bowen, one of the heroes of the day. The latter considered it a slur on the 'Queen Charlotte' on the grounds that the French flagship would not have escaped, had he managed to get alongside her in the way shown. In the extreme right of the picture is an English ship, in port-bow view, which is believed to be the 'Brunswick'.

The human concerns in the painting fill the foreground, with the theme of compassion to the defeated enemy. A swirling sea plucks at the French sailors who cling to the floating wreckage, while from small boats the strong arms of determined-looking British seamen pull their enemies to safety with hand and oar and boat-hook.

The painting was commissioned for £500, for engraving, by the publishers V. and R. Green and Christian von Mechel, as a pair to a similarly sized and priced military work of 1793-94, representing 'The Grand Attack on Valenciennes' (also called 'the Siege of Valenciennes', May - July 1793) by the Duke of York. In both paintings de Loutherbourg had help with the figures from James Gillray, who had accompanied the Duke of York's army in Flanders. Both pictures were publicly exhibited at the Historic Gallery, Pall Mall, from 2 March 1795, to raise subscriptions for James Fittler's prints. That of the 'Glorious First' was published in January 1799 and that of Valenciennes in 1801. Both pictures were sold to Mr T. Vernon of Liverpool at Chrsities, London, on 10 June 1799 and were exhibited on tour (including in Edinburgh in 1800). They were subsequently separated, the 'Valenciennes' ending up in Lord Hesketh's collection at Easton Neston while the Prince of Wales bought de Loutherbourg's for the Royal Collection in the early 1800s.

Following his accession at George IV in 1820, it was the need for a new pendant for it, in St James's Palace, which in 1822-23 led to Turner's only royal commission, to paint his same-sized 'Battle of Cape Trafalgar' (see BHC0565). This controversial work was delivered in 1824. While de Loutherbourg's picture, as Howe and Bowen's opinions show, is no more literally accurate than Turner's it does not appear to have aroused the criticism levelled at the latter and which, in 1829, led to the King ordering the removal of both works from St James's to the Naval Gallery at Greenwich Hospital, as the last of his major gifts to it. The reason is fairly clear: whatever the documentary or other failings of de Loutherbourg's painting, it is - at least in comparison to the Turner - an unequivocally heroic image cast in a conventionally patriotic mould. De Loutherbourg took considerable care with the detail (as indeed did Turner, a youthful admirer of his, in its pendant). An overall compositional sketch and a detailed study of the 'Queen Charlotte' are in the British Museum. He certainly went to Portsmouth to view the prizes, going on board at least one the 'Sans Pareil', as he told a correspondent in 1808.

The French ships are also shown flying the early Revolutionary naval ensign which places the French tricolour in the upper quadrant of the former Bourbon white naval ensign. This pattern was only in use from 1790 to May 1794, when it was replaced by the standard modern tricolour. Villaret-Joyeuse's ships had sailed without the new pattern and the 'Glorious First' was the only major action in which the French fleet flew its three-quarter-white predecessor. 'Queen Charlotte' is shown flying the Union flag at the main commensurate with Howe's position as Admiral of the Fleet, commanding-in-chief. (The flag itself is also in the Museum collection).

Born in Strasbourg, son of a miniaturist, de Loutherbourg was already a well-established member of the French Academy and painter to the French king Louis XV when the actor David Garrick, persuaded him to settle in London as scenic director at the Theatre Royal, Drury Lane, 1773-83, at the huge salary of £500 a year. He was a highly successful and influential designer for the theatre and, primarily as a Romantic landscape painter, was elected to the Royal Academy in 1781. He exhibited there in most years from 1772 to his death in 1812. This painting is signed and dated 'P J de Loutherbourg RA 1795'.
Back to Search Results
Buy a print License an image
Share:
Link copied to your clipboard!