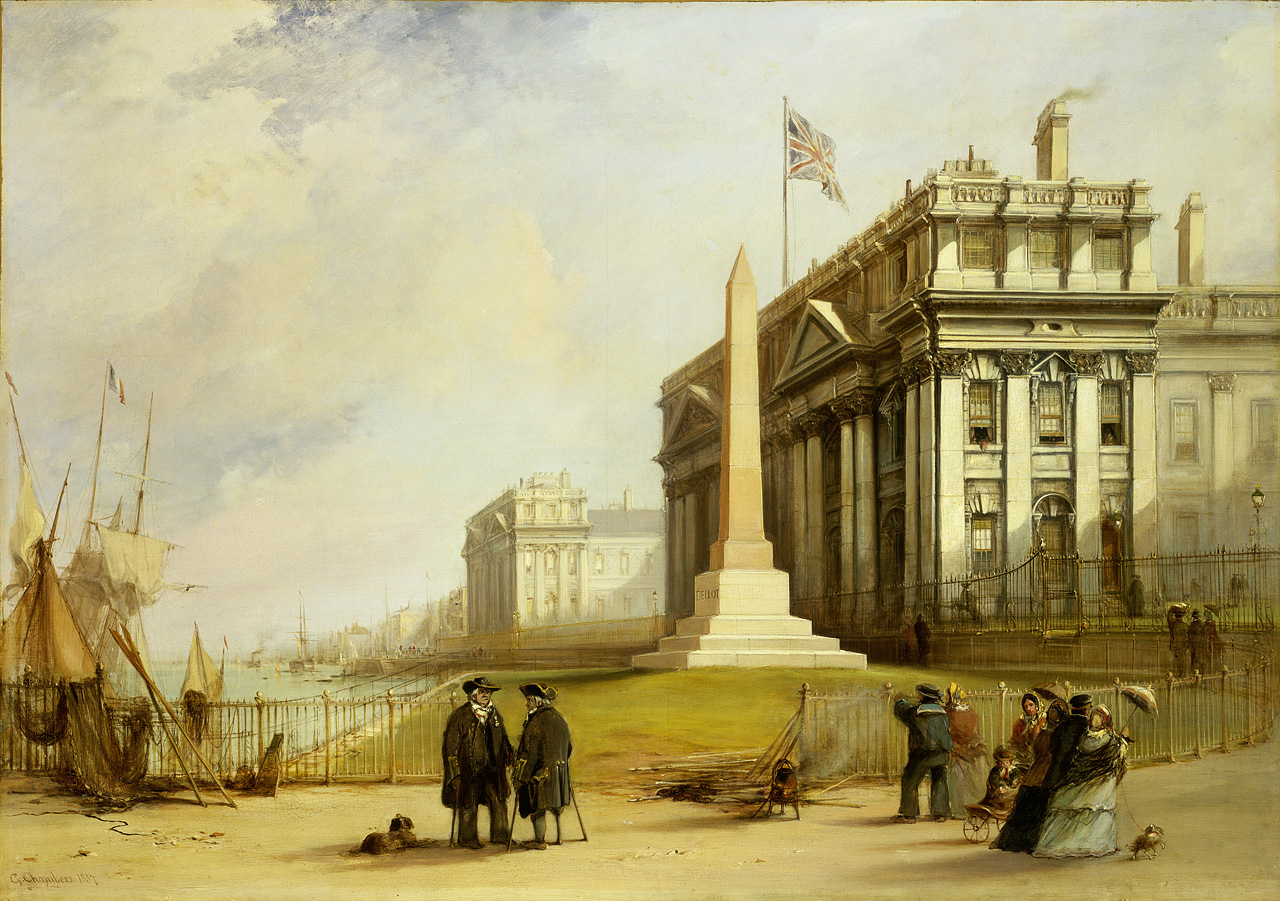 The Bellot Memorial at Greenwich Hospital

(Updated, November 2012) Greenwich Hospital, flying the Union flag over the Governor's House in the King Charles Court, dominates the right of the picture, from which inmates, through several open windows, look out at the scene. The Bellot obelisk stands in the foreground to the right of centre. It was erected in 1855-56 in memory of Lieutenant Joseph-René Bellot of the French Navy who was drowned after falling through ice in the Wellington Channel in August 1853 while carrying despatches from Beechey Island to Sir Edward Belcher's squadron, then searching for the lost 1845 Arctic expedition of Sir John Franklin.

The memorial is shown erected on a low mound with the word 'BELLOT' clearly visible, and with iron railings in the process of being put up around it. This is indicated by the workman's brazier, which is alight in the foreground, and by the railings lying ready on the ground nearby. The River Thames lies to the far left of the picture with shipping on it. One of the ships flies the French flag, which is undoubtedly a reference to Bellot. Nets and oars have been painted on the far left of the picture, resting against the iron railing. The figures in the foreground include two elderly Greenwich Pensioners from the Hospital, one on the right having a wooden leg. A dog sits at the feet of the man to the left. The figures in the right foreground include two women wearing crinolines and carrying parasols, walking on either side of a man in a flat cap, probably a naval officer. Beyond, a young woman pushes a perambulator towards the viewer, with a small child sitting in it. They are seen in back view, the nearest woman leading a small dog, while behind her to the left a sailor and a woman face the memorial, the sailor pointing towards it with his left hand. Figures can also be seen in the distance and other figures are indicated walking in the grounds of the Hospital. The obelisk can still be seen in the position shown.

The painting has been signed and indistinctly dated 1857 by the artist, who appears to have exhibited it at the Royal Academy in that year with this description: '"The Bellot Memorial". The last remark made by Lieutenant Bellot to his men who were with him was as follows: "Considering it as my duty as an officer to be at the post of danger I would rather die here [on the ice] than go ashore to be saved"'. The memorial itself appears to have been completed in the summer of 1856 since a report on it, accompanied by a wood engraving based on this painting, appeared in the 'Illustrated London News' of 5 October that year. This stated that his picture - clearly painted during final work - was a commission from 'Mr. Barrow' (Sir John Barrow), Second Secretary of the Admiralty and the most influential naval figure in mid-19th century Arctic exploration. How the picture subsequently entered the Greenwich Hospital Collection is not immediately clear since it is not in the 1922 printed catalogue of the Naval Gallery. Over £2000 was raised by subscription for the monument, which cost £500, the remainder being divided among Bellot's sisters, of whom he had been principal support.

The artist, born in 1829, was son of George Chambers, senior (1803-40). He was in fact baptized George William Crawford Chambers, though he did not use his second two names professionally, preferring George Chambers junior. On his father's death he was admitted, aged eleven, to the Greenwich Hospital School on the recommendation of E.H. Locker, the Hospital Secretary and one of his father's patrons. This suggests he may initially have gone to sea, since that was a general condition of entry. He painted attractive oil sketches of the Thames in a rather fluid medium but his larger pictures are less accomplished than his father's. A report that he later worked in South America and died in Trinidad now seems to be mistaken. He married in London late in 1852, and had a number of children baptized there between 1853 and 1866. He last publicly exhibited in London in 1862 but English-subject pictures dated in the 1870s are recorded and he died aged 49 in Wandsworth, London, on 12 January 1878. The cause was pulmonary tuberculosis, a chronic wasting disease, and although it is not impossible he was briefly in the Caribbean, that seems unlikely despite the existence of at least one undated painting of Lake Managua (Nicaragua) signed George Chambers. Both his younger brother William Henry Martin Chambers (1832-90) and the latter's son, George William (1859-1942) also painted and it seems more probable on current evidence that whoever was in South America was another artist.
Back to Search Results
Buy a print License an image
Share:
Link copied to your clipboard!