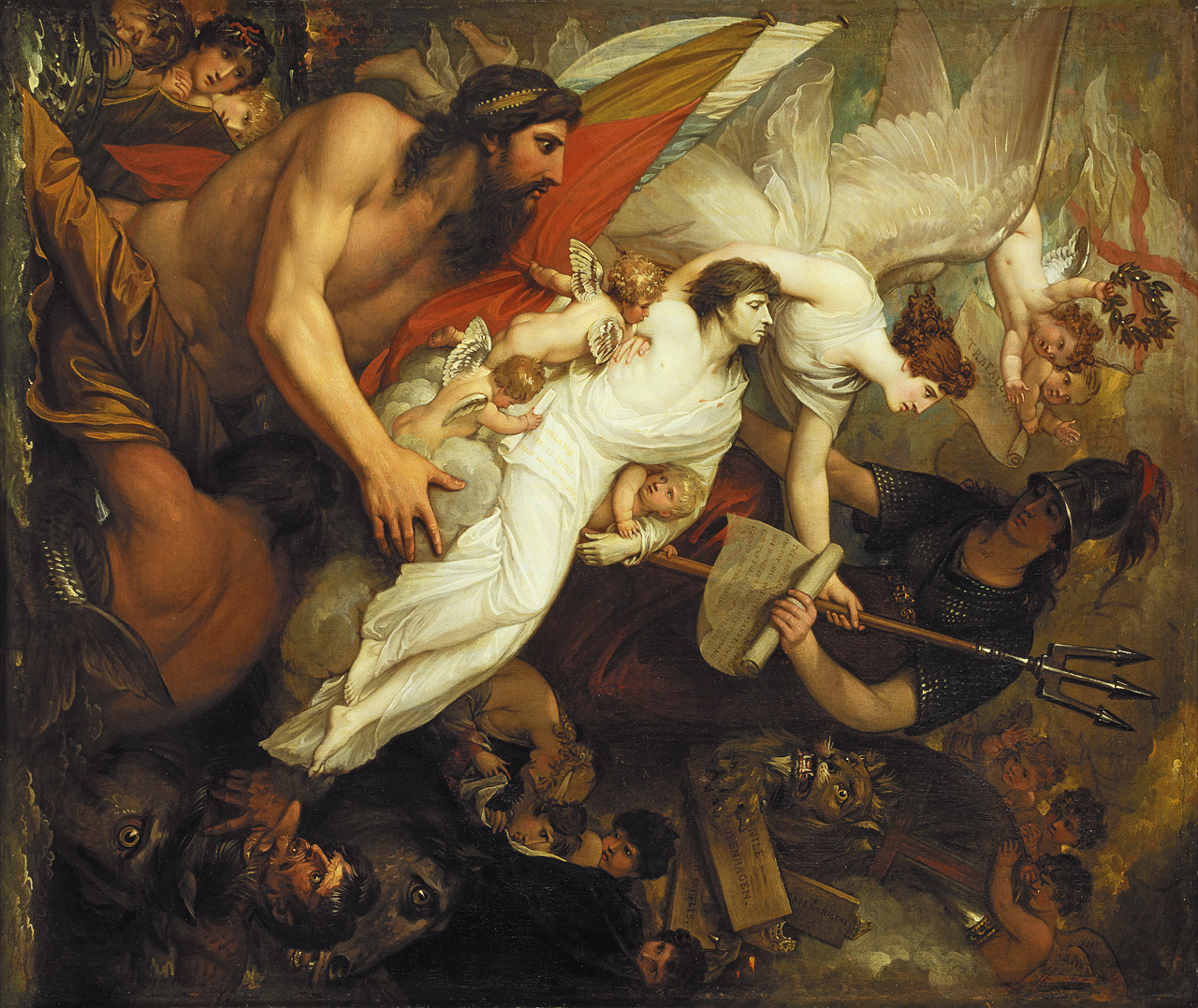 The Immortality of Nelson

Although the victory at Trafalgar, 21 October 1805, was a cause for national celebration, for Britain it also resulted in the loss of Nelson. His death at the height of his fame inspired a cult of hero-worship and images of Nelson were used to elevate him. Similarly the function of this apotheosis was to use allegory to this end. West has adapted the classical reading of an apotheosis to emphasize both heroism and sacrifice. He has reinforced the message by creating a composition expressing Nelson's nautical achievements.

Nelson is positioned with the gods and receiving immortality, his dead body being offered up to Britannia by Neptune. Britannia is shown in shadow to denote the grief of the nation. Neptune is positioned on the left of the painting, up to his waist in water, surrounded by nereids. In the right foreground are two of the hippocampi which drew his chariot. These are wild-eyed and their tails swirl in the maelstrom of water. The smoke and ferocity of battle rages on the right. Nelson appears as a neo-classical funerary sculpture, wrapped in a white shroud and lying on a bed of clouds, with his vivid red wound visible. Winged putti surround him to represent the continuity of life. One holds a scroll inscribed with his famous signal 'ENGLAND EXPECTS EVERY MAN WILL DO HIS DUTY'. Another clutches the Spanish flag and a third holds the staff of Neptune's trident. Nelson's head is supported by the winged Victory, who helps to support Neptune's trident in her left hand. As the messenger of the gods she represents the crowning of the victor in a contest of arms. In this image the victor is Britain, indicated by Britannia, although the victory has come at a high price. Two more winged cherubs hover above her, one holding her attribute of a laurel wreath and the other a banner with the word 'TRAFALGAR', to emphasize the locus of victory and loss. Nelson's flag as Vice-Admiral of the White flutters above them. Britannia holds a scroll in her left hand which reads, 'THE ROYAL ASSENT TO EARL NELSON'S ANNUITY BILL OF FIVE THOUSAND POUNDS-ONE HUNDRED AND TWENTY THOUSAND FOR THE PURCHASE OF A SPLENDID DOMAIN FOR THE FAMILY'. Neptune supports the captured flags of the vanquished on his left shoulder. In the top right a golden glow indicates a glimmer from the sun. Immediately below is part of Britannia's shield supporting three more cherubs. In front of the shield the lion representing Britain holds tablets inscribed with Nelson's victories in battle, 'NILE', 'COPENHAGEN', 'CAPE St VINCENT', and 'CXXII BATTLES'. Below the lion two figures hold a black cloak to represent the death of Nelson, while another holds Nelson's chelengk, presented to him by the Sultan of Turkey in recognition of the victory of the Nile.

The painting was engraved as the frontispiece to 'The Life of Admiral Lord Nelson, KB', the first major biography, written by John McArthur and James Stanier Clarke and published in 1809. It is one of two by West (the other being 'The Death of Nelson', BHC0566) and five by Richard Westall, all used for this project, which were presented to Greenwich Hospital with Lemuel Abbott's best-known portrait of Nelson (BHC2889) 'by Jasper de St Croix, Esq., and several other patriotic individuals' in 1849. This painting is in fact an enlarged version of the central part of a relating 'sketch' by West of a projected sculptural wall monument to Nelson, in which it forms a sort of 'altarpiece' framed by columns. The latter (now in the Yale Center for British Art, New Haven, Connecticut) was one of many designs for an official monument and both paintings were shown by West at the Royal Academy in 1807. The 'monument' version (no. 194) was accompanied by a long catalogue description of its purpose and design: this painting (no. 217) was simply titled 'The Immortality of Nelson' and cross- referenced to it. In 1812 it was also executed in Coade stone, modelled by West and Joseph Panzetta in a modified and more elongated sculptural form, on the portico of the King William Court colonnade at Greenwich Hospital. West's drawing for this version is also in the National Maritime Museum (Greenwich Hospital Collection).

Born in Pennsylvania, West began his artistic career painting portraits but soon moved to historical subjects. He moved to Philadelphia in 1756 and in 1760 he travelled to Italy to copy Old Master paintings. He arrived in England in 1763 and became historical painter to George III in 1771. In the same year he achieved wide acclaim for his painting 'The Death of General Wolfe', by placing the figures in modern dress and thus applying a new realism to history painting. West believed that historical accuracy was less important than immortalizing his subject in a heroic pose. Concerned too with the movements of Neo-Classical and Romantic idealism, he was one of the founders of the Royal Academy and became its second President, on the death of Sir Joshua Reynolds 1792. He retained this commanding and influential position until he offended George III by visiting Napoleon in Paris in 1802. Later he gained great popular acclaim with his large painting of the 'Death of Nelson' 1806, showing the fall of Nelson on the quarter-deck of the 'Victory'. This painting was exhibited at the Royal Academy in 1807 as part of West's concept for a monument to commemorate Nelson and it is signed and dated 'B.West 1807' lower left. See also BHC2906.
Back to Search Results
Buy a print License an image
Share:
Link copied to your clipboard!