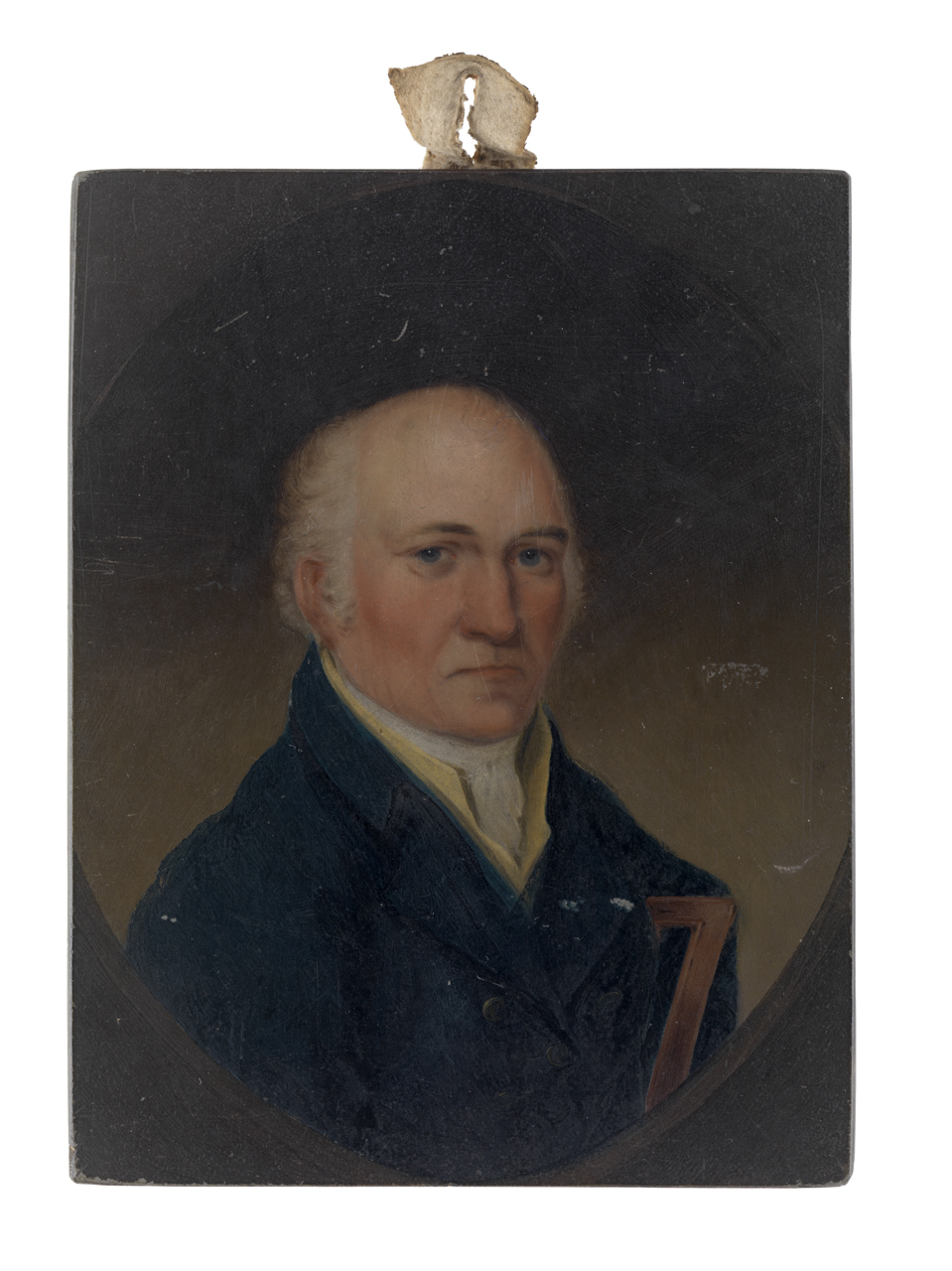 Oil portrait on a rectangular piece of slate, with a leather [?] suspension loop fixed to the back at top centre. The image is in false oval format and the spandrel corners of the oval (which is not complete at the sides) are painted grey with a false perspective rebate at the inner edge. The sitter is shown bust length against a neutral background, seated on what appears an elegant wooden-backed chair. He is half turned to his left but facing out to the viewer, with his left arm over the chair back, has blue eyes and is largely bald, with grey sideburns and back hair cut short. He appears to be wearing civilian dress of a blue coat with brass buttons over a buff or yellow waistcoat with a white shirt and neckcloth. An inscription in the reverse reads 'Admiral Sir John Warren, by Chappel'. Nothing else is known of the artist.

If this is correct the sitter is presumed to be John Borlase Warren, for lack of known alternative. This portrait is sufficiently close to other images of him to suggest it shows him late in life, though a prominent mole on the left cheek which appears in others is not evident and they also show a slightly cleft chin. See for example BHC3078, an oil by Mark Oates of about 1799.

From a well-connected and wealthy Nottinghamshire family, Warren was educated at Winchester and also at Cambridge University, completing his bachelor's degree (in periods of residence ashore) after already entering the Navy in 1771. He was an MP by 1774, was made a baronet in 1775 and an MA of Cambridge in 1776. A dandy and gambler, he purchased a yacht and Lundy Island in the Bristol Channel as a base for sailing, and only fully pursued a naval career after the onset of the American War. He became lieutenant in 1778 and after commanding a sloop in 1779 was made post-captain in the frigate 'Ariadne' in 1781. In the French Wars of 1793 to 1815 Warren held a string of commands with distinction and success (including in prize money), above all as a fighting seaman though he later had opportiunity to show his higher command capacities. He became rear-admiral in 1799, was ambassador to Russia 1802-04 and was twice commander-in-chief on the American station, 1807-10 (as a vice-admiral) and, as an admiral, in 1812-14 during the Anglo-American war of those years. He was also active in politics at home. A very intelligent and polished man, he was unusual as a naval officer in being fully university educated, and with matching interests in various matters including naval architecture. He was made a Doctor of Civil Law of Oxford University in 1814 just after his final promotion to Admiral of the White, but never got the peerage he aspired to.

Nothing is known of the artist, Chappel: the use of slate is also unusual and the portrait is or rather modest quality given the social status of the sitter. A portrait of a clergyman in the RA exhibition of 1804 was by G. Chappell (or Chapel according to Daphne Foskett's 'Dictionary of British MIniature Painters') who was classed as an 'Honorary Exhibitor', so it might be by someone who was essentially amateur and knew Warren, though this is only speculation. The Museum's earliest record of this item is in June 1960, but without giving a source for it.
Back to Search Results
Buy a print License an image
Share:
Link copied to your clipboard!