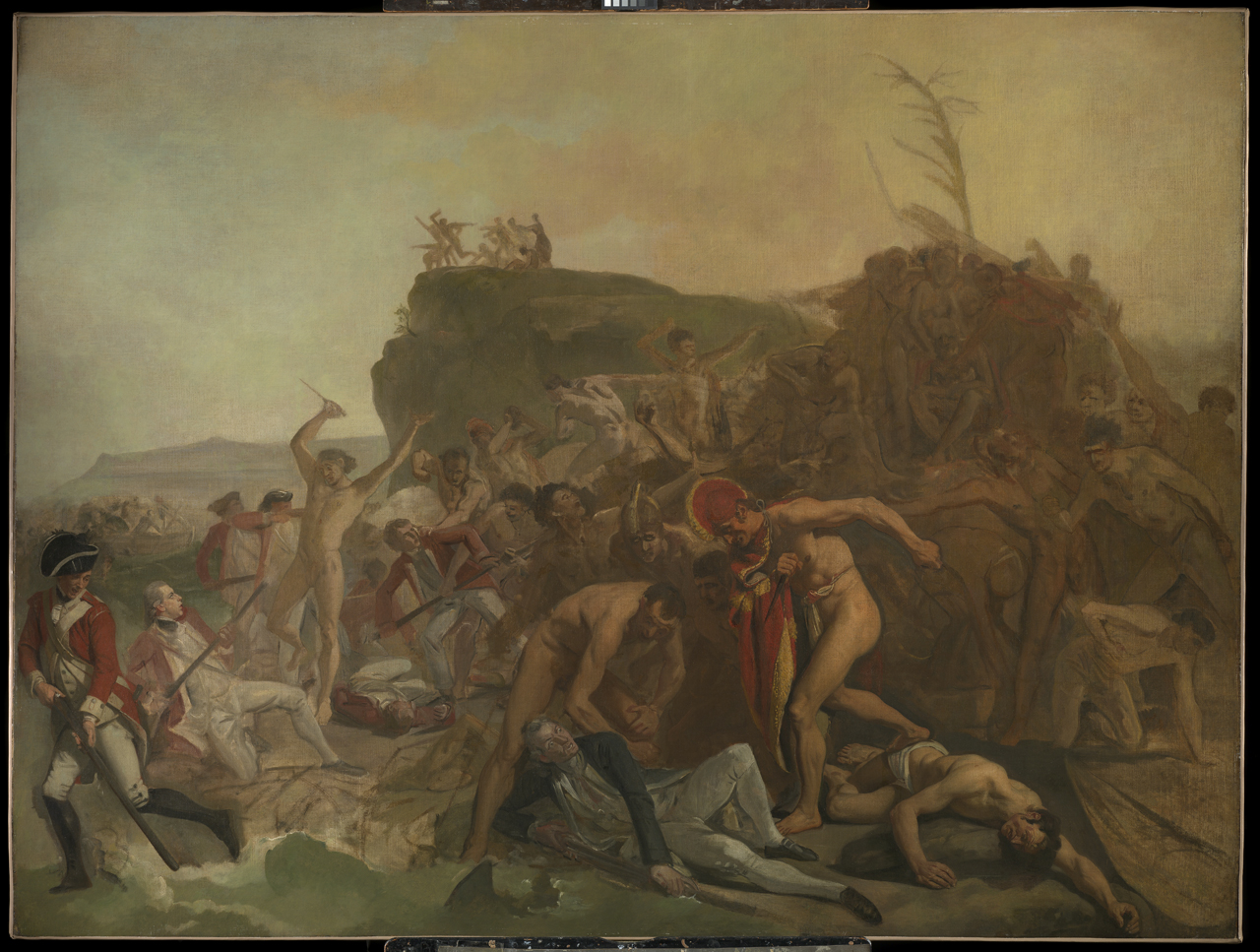 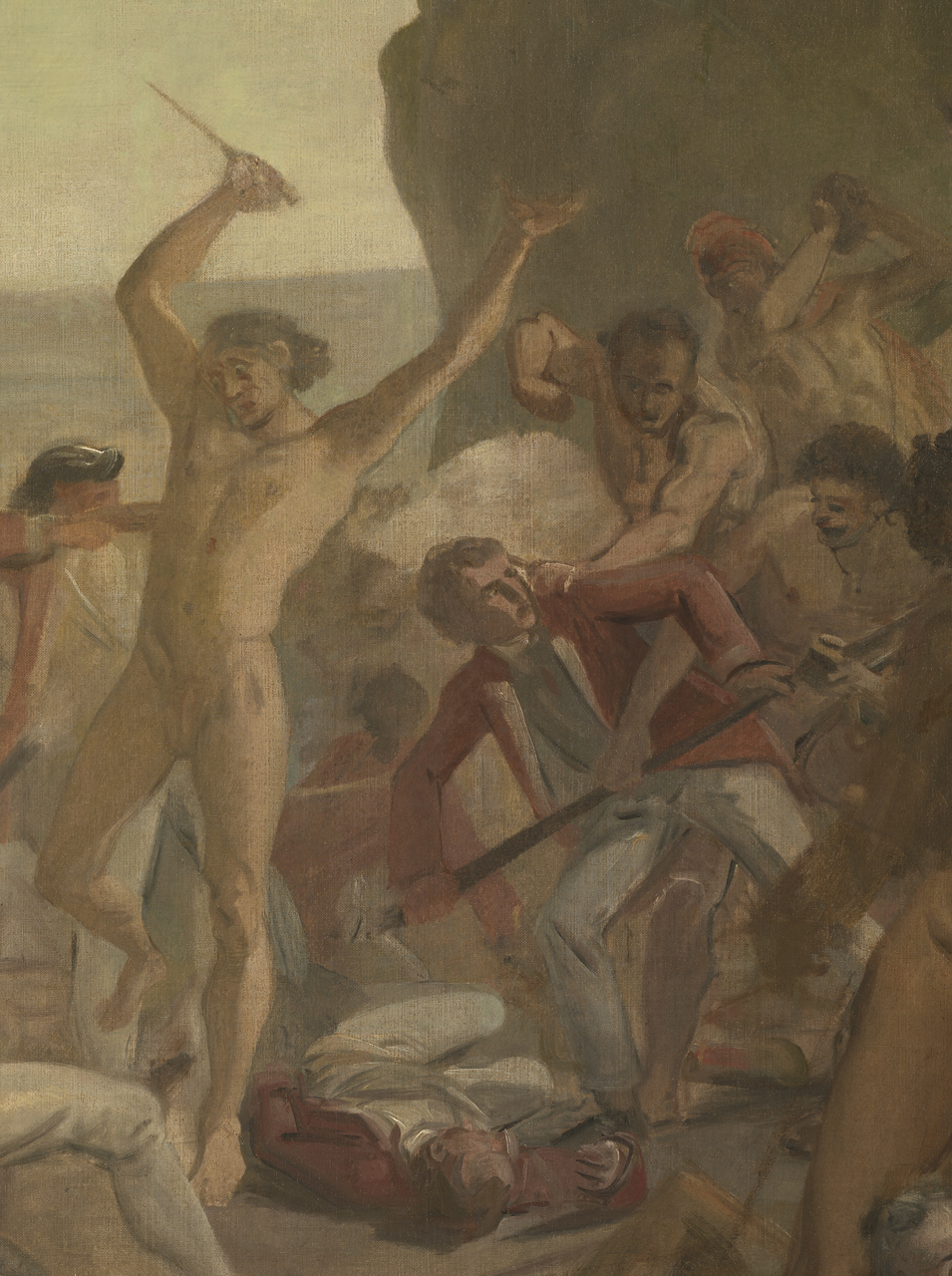 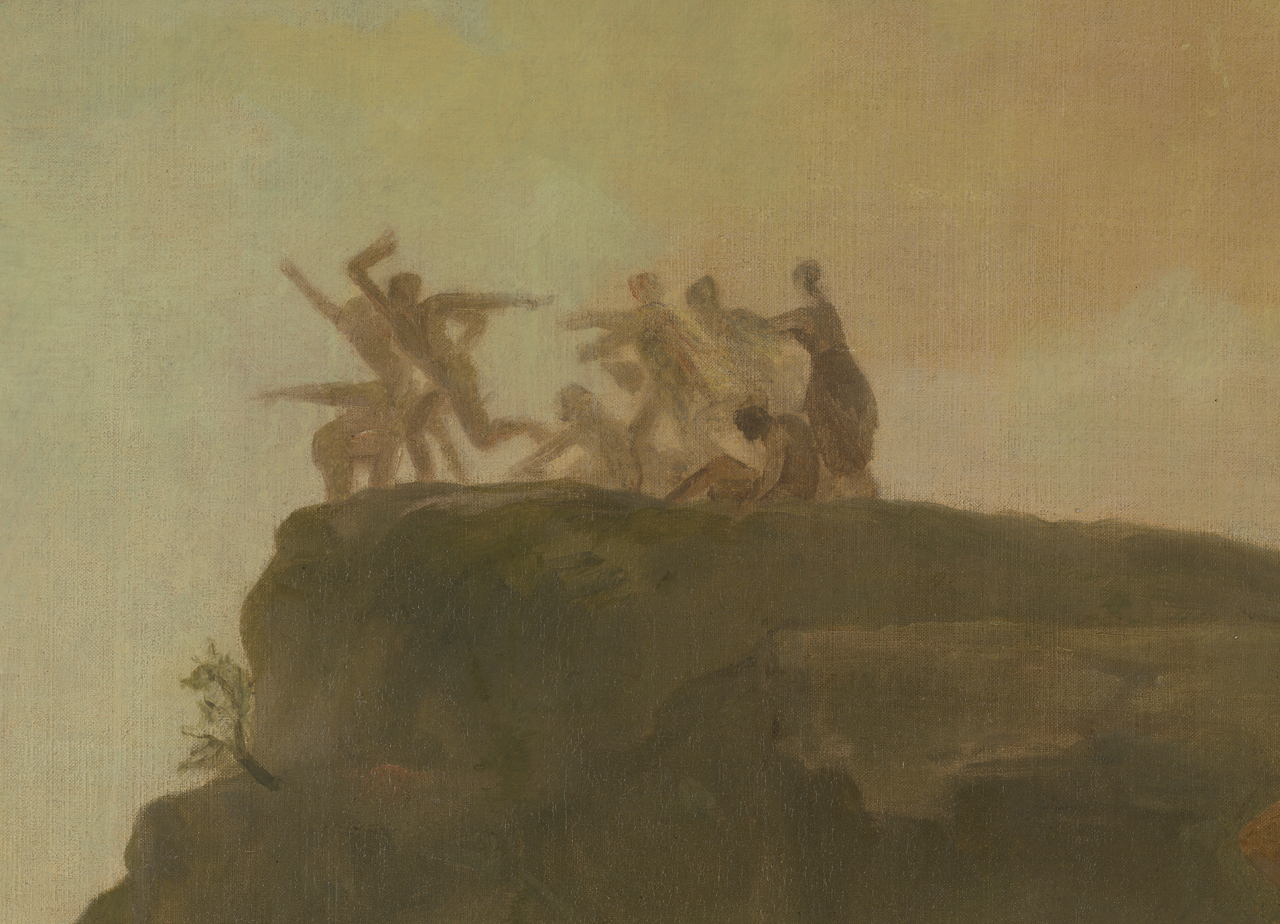 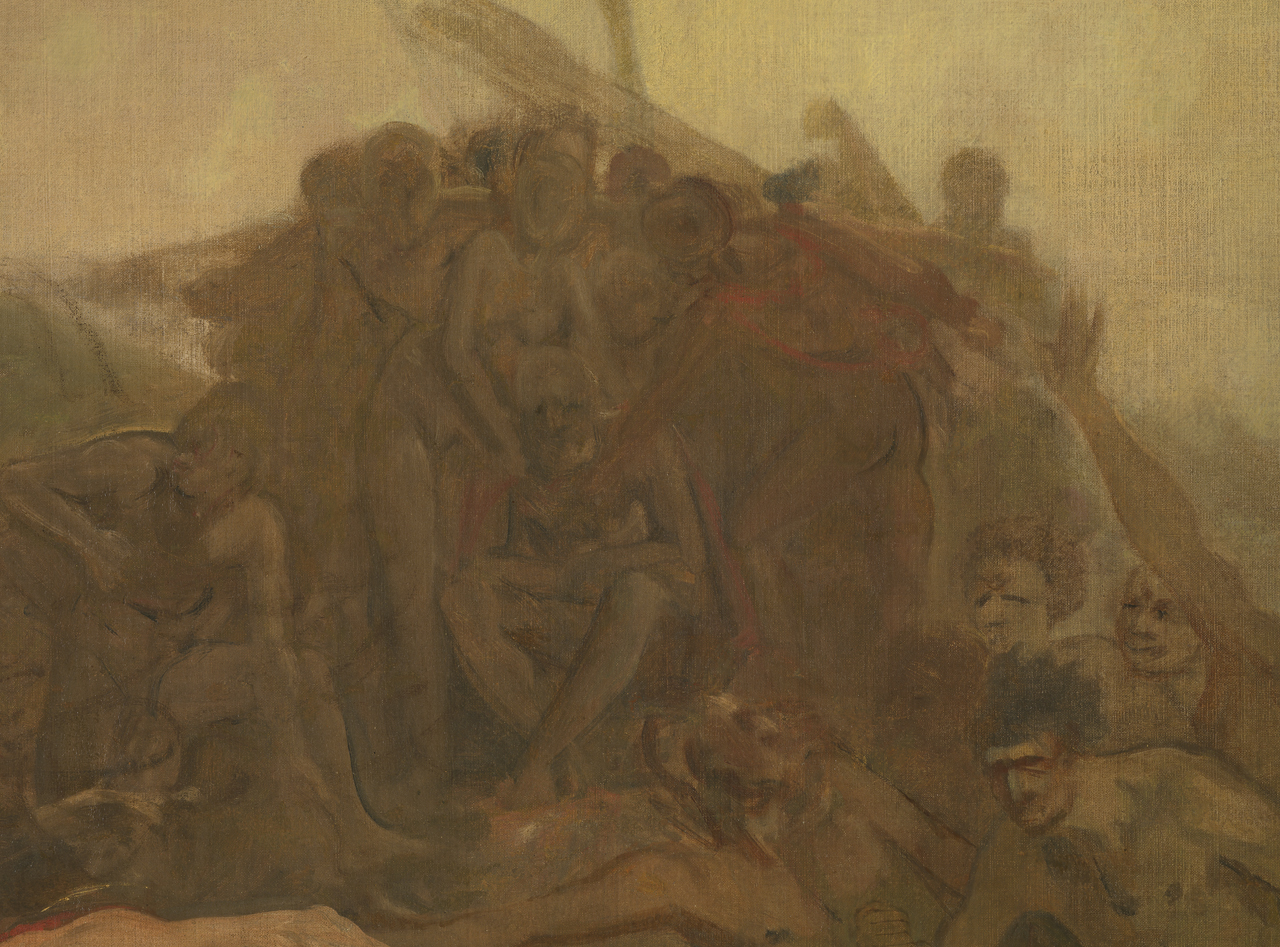 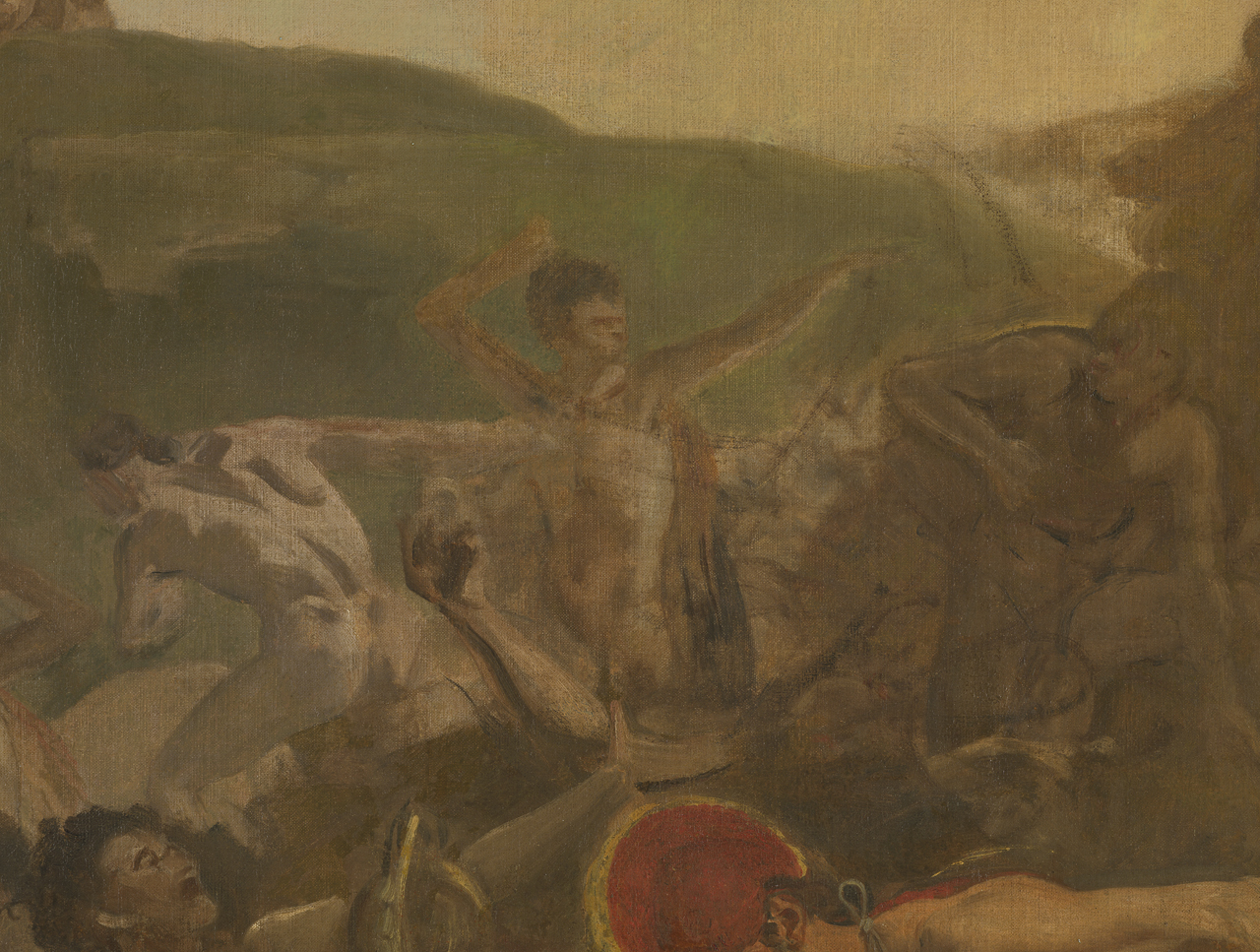 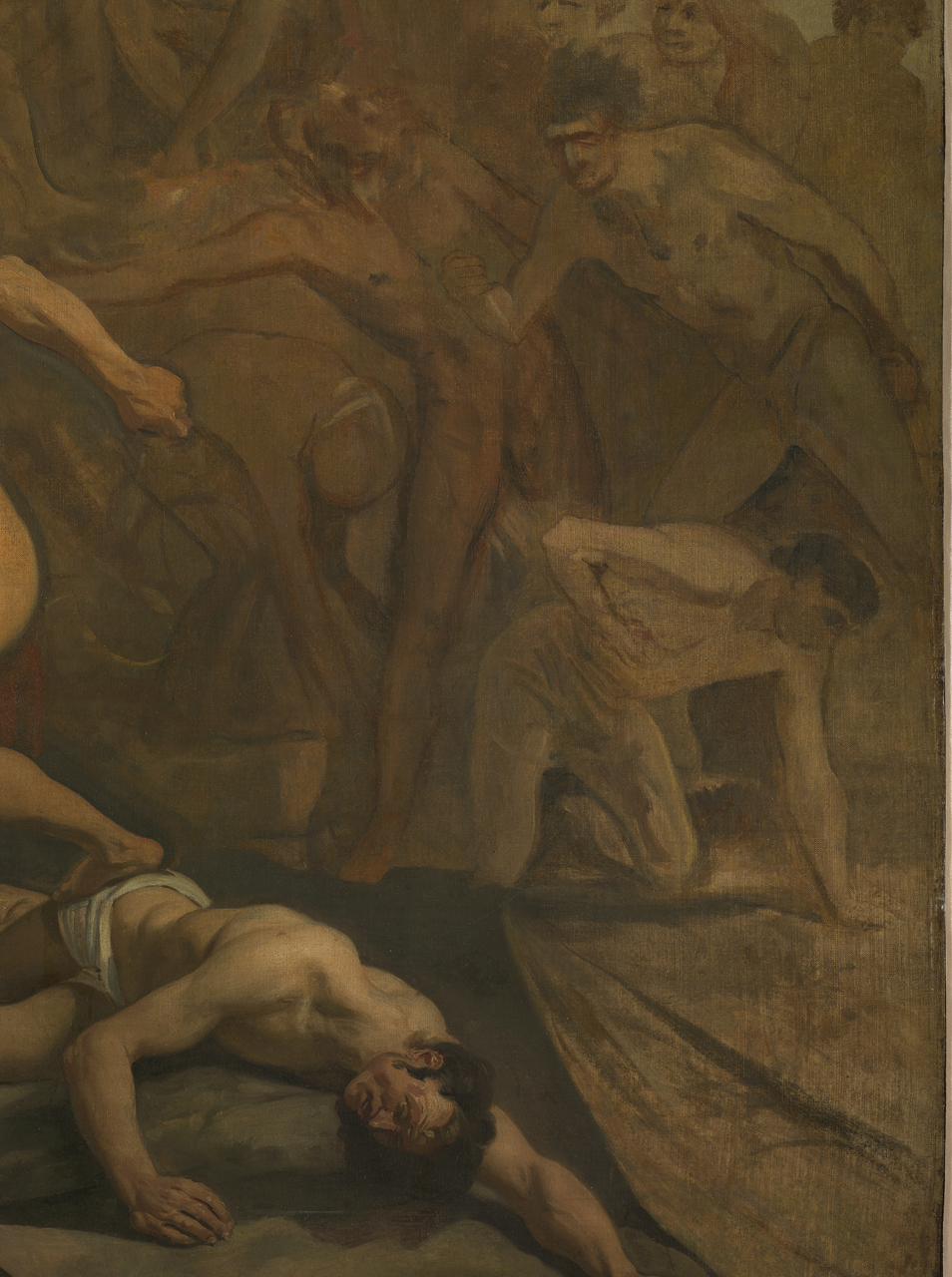 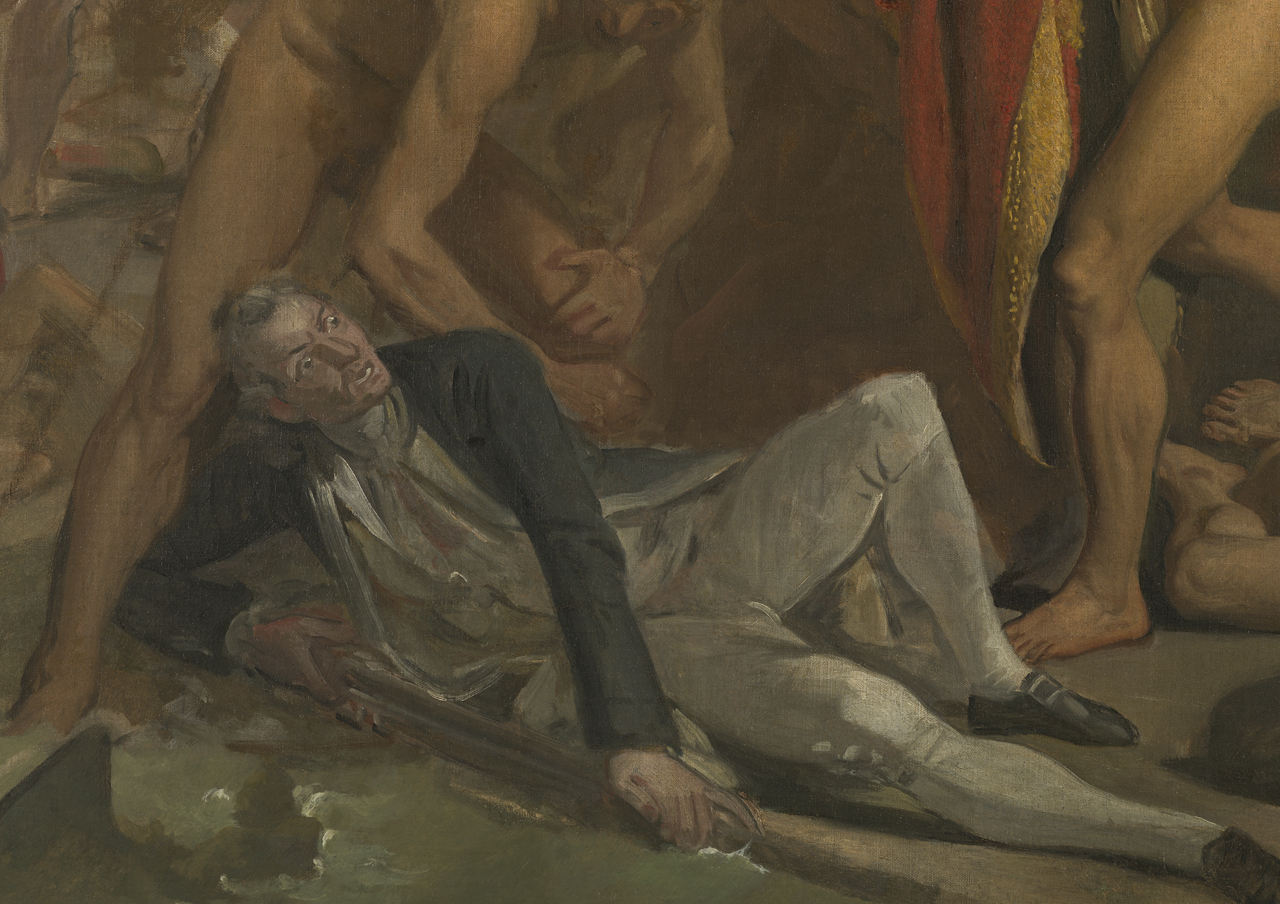 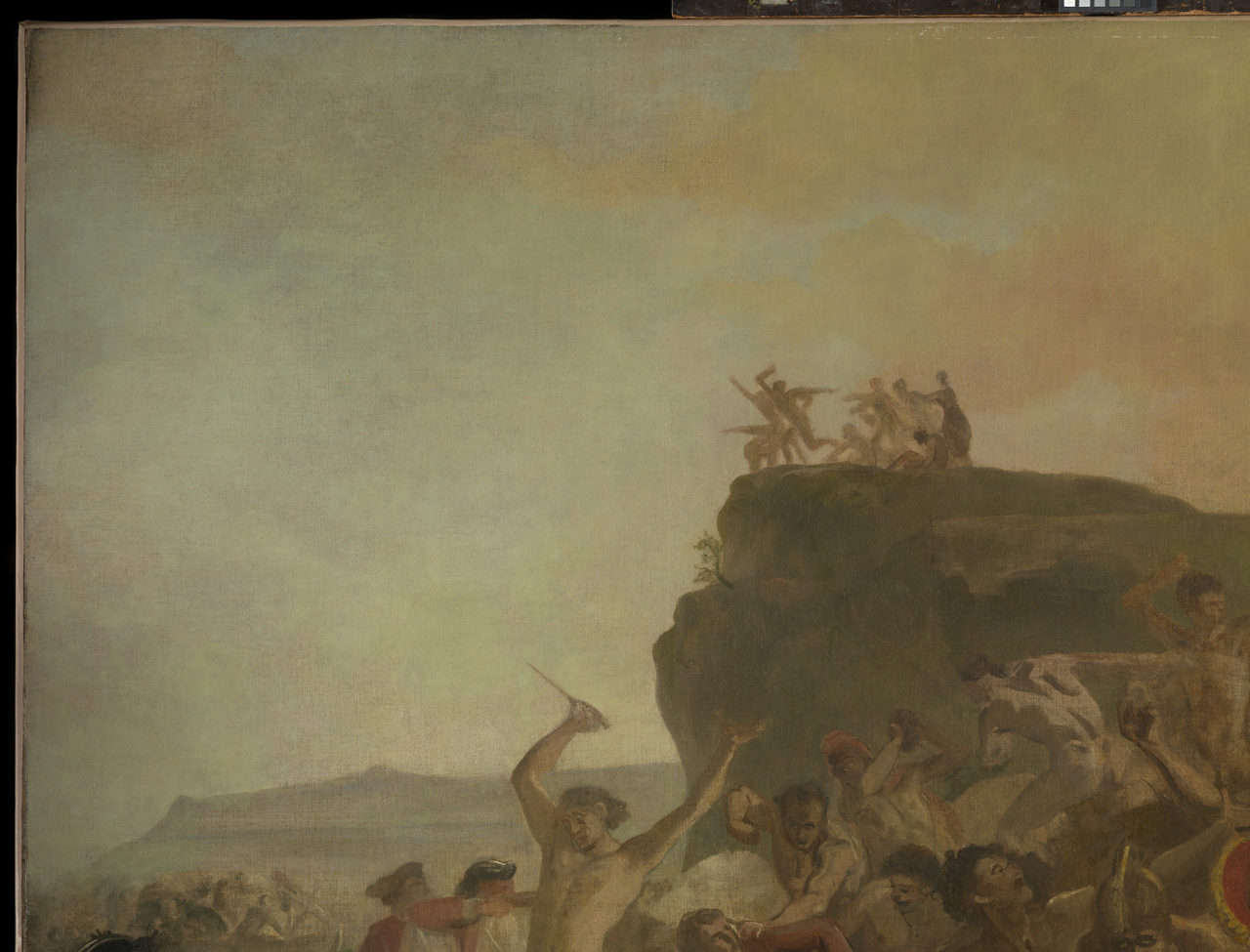 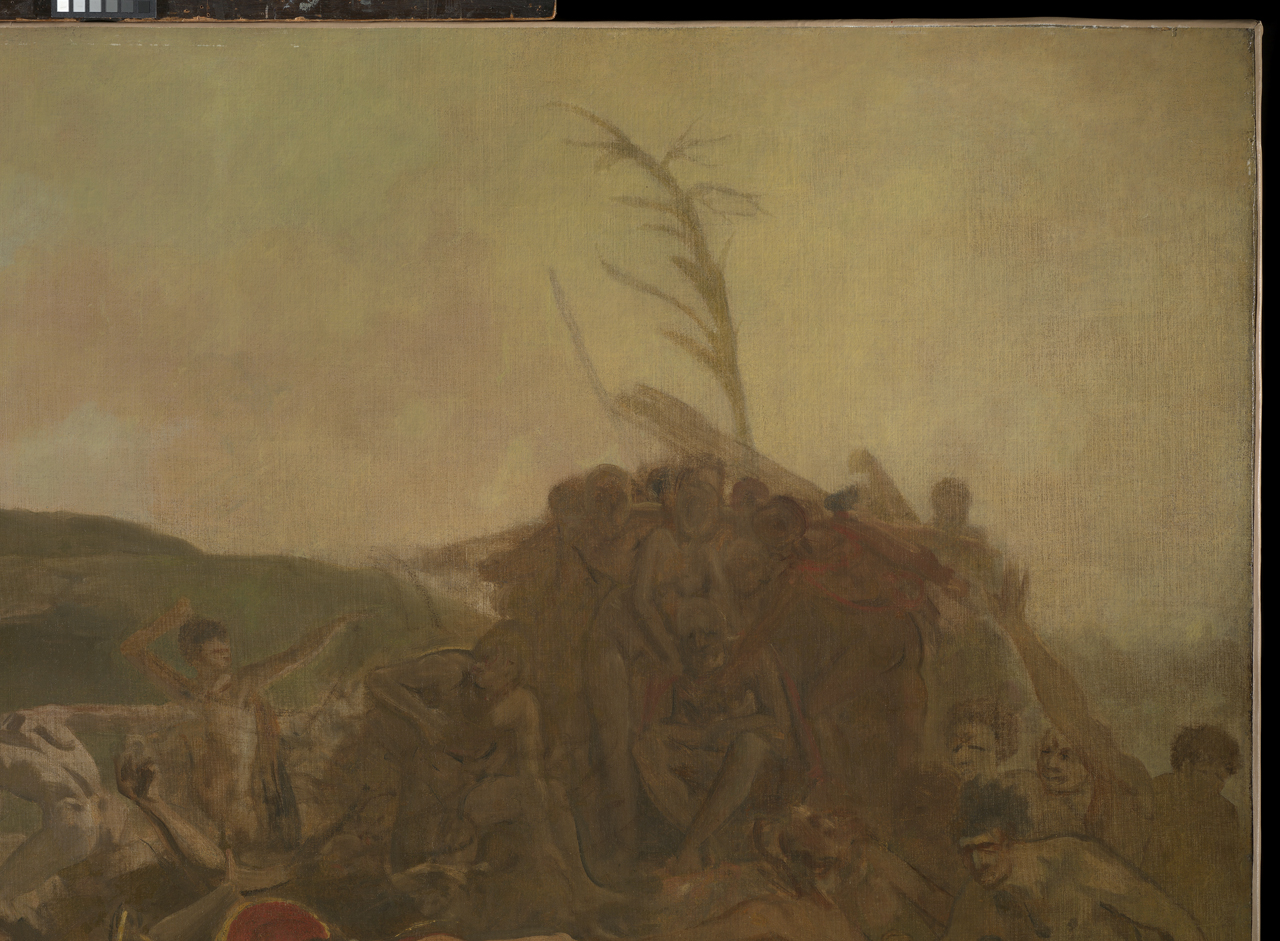 (Updated, February 2017) An unfinished painting showing the death of Captain James Cook, at Kealakekua Bay, Hawaii, on 14 February 1779 at the hands of an incensed crowd, during his third Pacific voyage in the ships 'Resolution' and 'Discovery', 1776-80.

Conflicting accounts regarding his death soon circulated but the facts are fairly clear. Cook had spent a month on Hawaii, following his investigations beyond the Bering Strait, having previously only briefly visited other islands of the group. He had been received with honour and various rites which he had failed to understand as identifying his arrival as that predicted for Lono, a local deity. Having then left Hawaii he was forced back by storm and a broken mast - a return which caused confusion among the Hawaiians as not conforming to their understanding of the situation. Various incidents and thefts occurred and on the night of 13 February 1779 the Discovery's cutter was stolen. It was a serious practical loss and Cook felt obliged to take retaliatory action.

He went ashore with three boats, left in charge of Lieutenant John Williamson, the marine lieutenant, Molesworth Phillips, and nine marines to 'invite' King Kalei'opu'u aboard 'Resolution' until the stolen boat was returned, according to the practice he had successfully adopted in such cases in Tahiti. The king initially agreed but on the way his wife and other members of his retinue tried to persuade him not to go on the ship, because they feared for his life. By the time Cook's party reached the water's edge in Kealakekua Bay, it was surrounded by a large, hostile crowd. When news suddenly arrived that another local chieftain had just been shot and killed in another incident with Cook's men across the bay, the Hawaiians attacked. Cook shot one man dead and as the British retreated into the water turned to call in the boats, a gesture Williamson misunderstood, instead pulling further out. Cook was knifed in the shoulder from behind and clubbed on the back of the head. He fell forward into the shallows and was finished off by clubbing and stabbing. Four marines were also killed. Phillips was wounded but reached safety with the rest of Cook's shore party. The whole episode was a tragedy of cross-purposes and mismanagement, with deaths and regret on both sides. Peace was rapidly restored by the diplomacy of Cook's successor in command, Lieutenant Charles Clerke and most of Cook's remains subsequently returned with full local honour for burial at sea in the bay.

Captain Cook is shown lying on the ground in the centre foreground of the painting, wearing a blue uniform coat and white breeches. He lies on his right side at the water's edge, still clutching his musket (which was in fact double-barrelled). The Hawaiians are mainly unclothed and some wear head dresses. Most of the figures are very sketchy and only four are in a completed state. The marine on the left running into the water, the Islander stabbing the prostrate Cook, the chief with the cloak and headdress to his right and, to the right of him, the dead Hawaiian. Even Cook is unfinished. The terrain and coastline have been sketched with a bay visible in the distance and fighting continuing on a hill on the left and a rise in the land on the right.

Regardless of the actual details of the event, Cook's achievements and death were immortalized in the decades that followed in numerous ways. They were commemorated by several poets and plays were also produced. Zoffany loved the theatre, which this work reflects. He had also originally been recruited by Joseph Banks to join him as artist on Cook's second voyage but, when Banks dropped out, he went to Italy instead. The painting is not an eyewitness account but a response to the interpreataion of it by John Webber, the official artist who did go with Cook on the third voyage but was also not present at his death. Webber's painting, now in Australia, was engraved in 1782-83.

It has been noted that Zoffany's positioning of Cook is at odds with eyewitness accounts of his death. Zoffany knew many of Cook's friends and may have painted his portrait. The emphasis on the pose of the dying hero was a popular motif in late-18th-century history painting and Zoffany has the example of West's 'Death of Wolfe' as a reference point. The heroic yet suffering Cook and the idealized 'savage' who murders him confront each other. They are both revealed as noble in Zoffany's moment of classical tragedy. The death of Cook then could be ascribed to the treachery of individual Hawaiians and not Pacific Islanders as a whole.

In his response to Webber, Zoffany introduces naturalistic elements as he seeks to produce a monumental history composition in the grand manner. He portrays Cook as an ideal tragic hero but in a realistic setting and in contemporary dress. This fusion of the ideal with the actual leans heavily on classical sculptural precedents. Cook is shown in the manner of the Ludovisi Gladiator, while his murderer assumes the pose of the Discobulus (discus thrower) from Charles Townley's collection. Classical echoes are enhanced by the chieftain's headgear, similar to the helmet worn by the ancient Greeks.

Zoffany was brought up in Bavaria where he was apprenticed to a local artist before training in Rome 1750-57. In 1760 he moved to England and was taken up by the actor David Garrick. He specialized in theatrical scenes and portraits, as well as conversation pieces showing close attention to detail of costumes and settings. By 1764 Zoffany was introduced to Queen Charlotte and for the next ten years he worked for the royal family. He was nominated to the Royal Academy in 1769. He was in Florence and Vienna, 1772-79 before travelling to India, 1783-89. On his return he saw the play 'The Death of Cook' at Covent Garden, which may have inspired him to produce this late work. Why it remained unfinished is not known but by 1826 it belonged to Lt-General Alexander Kyd, an East India officer who died that year, and who apparently inherited it from his cousin Robert, also an East India Company military officer and founder of its botanic garden in Calcutta. However, if this provenance is correct, the fact that Robert (1746-93) worked and died in Calcutta, and that he certainly knew both Zoffany there and John Williamson - the naval lieutenant present at Cook's death - may also suggest the possibility it was painted in India, perhaps left there with Robert and later shipped back, despite its large size. It was sold at auction in the Alexander Kyd sale at Christie's in September 1827 and bought by a dealer called Peacock. He seems to have subsequently sold it to Cook's widow, Elizabeth, whose executor and residuary legatee, John Leach Bennet, presented it to Greenwich Hospital on her death in 1835.
Back to Search Results
Buy a print License an image
Share:
Link copied to your clipboard!