Skip to main content
You are here:
Home Exhibitions and events Flamsteed lecture: The Physics of Supernovae by Prof Ian Howarth

Flamsteed lecture: The Physics of Supernovae by Prof Ian Howarth

This talk will be a gentle introduction to the physics of 'core collapse' supernovae (think pictures, not equations!).

Working from a largely historical perspective, he will outline how we know that these are the end-points of the evolution of the most massive stars, and their role in generating most of the heavy elements that exist in the nearby universe. 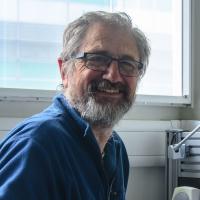 Having concluded that choosing an interesting subject was more important to him than a ‘marketable’ one, Ian Howarth applied to study for a degree in astronomy, his passion. Only a handful of universities offered astro degrees back then, and UCL was the obvious choice. He was later invited to take up a PhD to exploit data from the International Ultraviolet Explorer (IUE) satellite, which launched in in 1978. This was the first time that intermediate-dispersion UV spectra of reasonably faint sources could be obtained routinely, and it was Ian’s good fortune to be in on the ground floor as this largely new spectral window was opened up.

A sabbatical year at the Joint Institute for Laboratory Astrophysics in Boulder, Colorado, cemented a growing interest in stellar winds from hot stars. Various aspects of hot, massive stars have been the main focus of Ian’s research ever since, including some of the first uses of spectropolarimetry to investigate the geometry of outflows, pioneering studies in the now burgeoning study of magnetic fields, very rapid stellar rotation, and exploiting the potential of massive-star binary systems as primary distance indicators for the nearest galaxies.

He can trace his academic genealogy (his supervisor’s supervisors, etc) back to Isaac Newton and Galileo Galilei.

How are black holes formed?