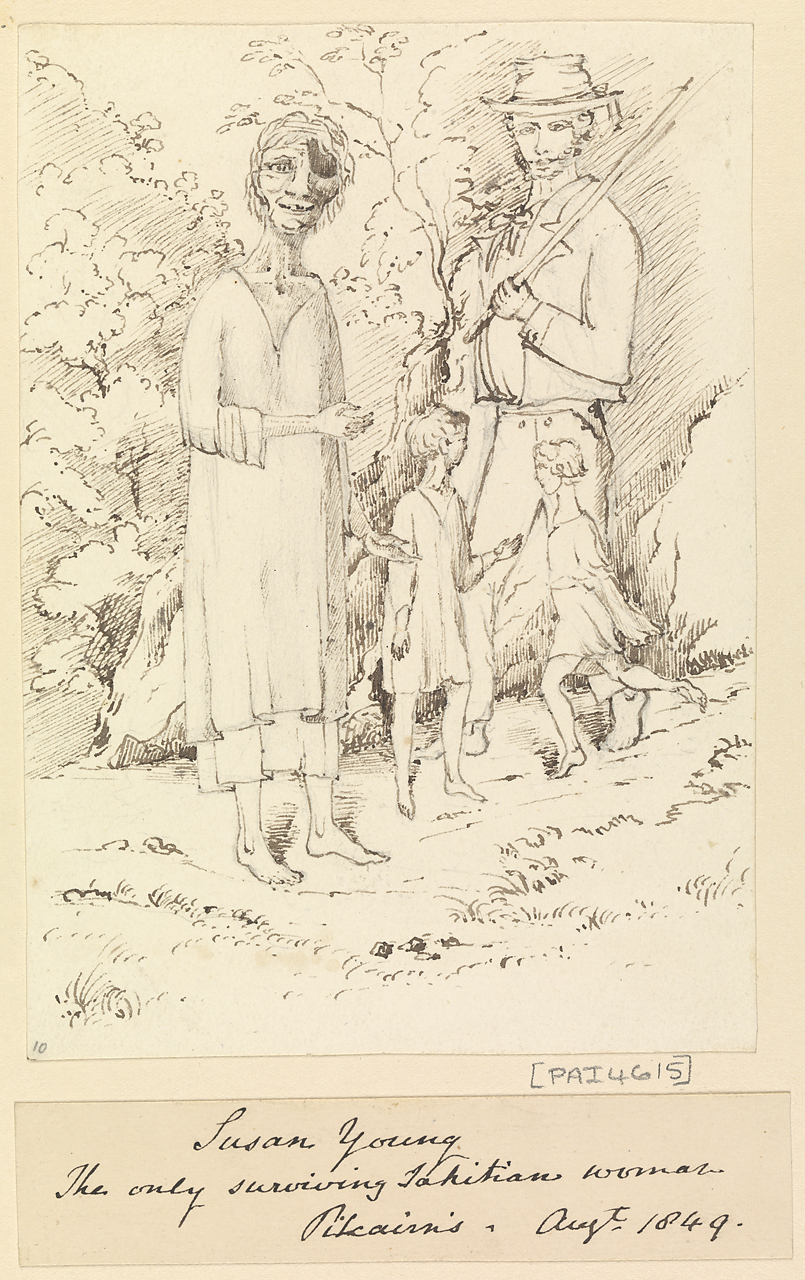 (Updated, February 2016) No. 10 in Fanshawe's Pacific album, 1849 - 52. Captioned by the artist on the album page, below the image. The woman shown is the Tahitian-born wife of 'Bounty' mutineer Edward ('Ned') Young: their grandson, also Simon, was the annual magistrate on Pitcairn when Fanshawe called there, 11- 12 August 1849. When this drawing was first catalogued (2010) it was assumed that the man on the right might be a British seaman from Fanshawe's 'Daphne' , but it is perhaps more logically Simon, with two Pitcairn children - possibly his and therefore Susan's great-grandchildren - despite lack of specific identification. Susan, who died in July 1850, was presumably over 70 at this time and apparently blind in the left eye. Fanshawe's journal briefly mentions her in his account of the fate of the 'Bounty' mutineers.Towards the end of the feuding that saw Christian and other mutineers killed by the Tahitian men who had accompanied them to Pitcairn, only two Tahitian men and four Englishmen remained: Adams and Young in the village, and McCoy and Quintal hiding in the woods. Adams and Young then led a plot in which the stronger Tahitian was lured to bed by one of the other Tahitian women and, when asleep, killed by Susan Young with an axe: at the same time she shouted 'Fire' as the signal for her husband to shoot the other Tahitian man. This Young immediately did with a musket that he had been loading in his victim's presence, telling him it was to shoot a hog (Fanshawe [1904] p.187). Apart from two careful pen-and-ink island profile drawings, this is one of only two such pen sketches of people that Fanshawe preserved in the Museum albums: the other is PAI4637. Since most of the watercolours must have been done in his leisure, these two may be the closest we have to other sketches now missing on which at least some of the watercolours were probably based. This is one of a group of three Fanshawe drawings of Pitcairn, PAI4613 - PAI4615.
Back to Search Results
Buy a print License an image
Share:
Link copied to your clipboard!