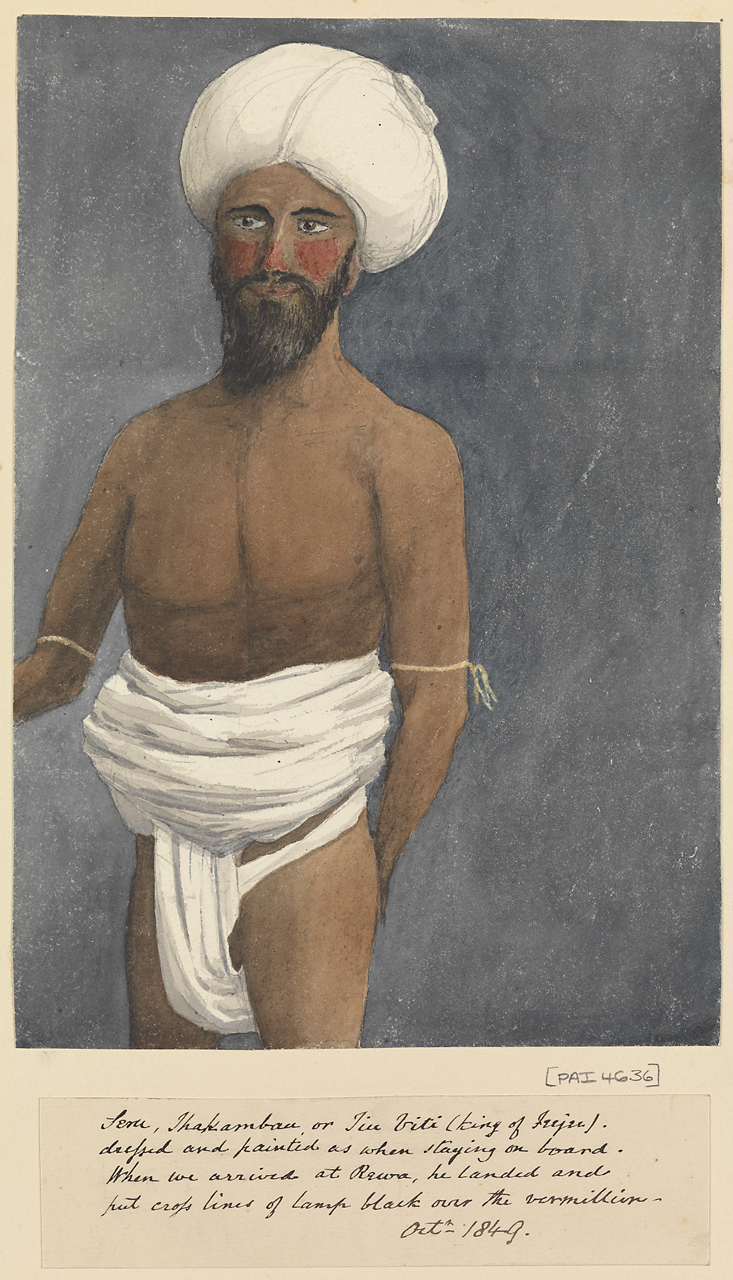 No. 30 in Fanshawe's Pacific album, 1849 - 52. Captioned by the artist on the album page below the image: 'Seru, Thakambau, or Tiu Viti (King of Feejee) dressed and painted as when staying on board. When we arrived at Rewa, he landed and put crossed lines of lamp black over the vermillion. Octr 1849'.

A head and torso detail of this drawing, to just below the armbands, is reproduced in Fanshawe's 1904 biography, f. p. 226. Thakambau [sic], as Fanshawe calls him, is one of the most important figures of Fiji history, first as a local warrior and warlord under his father Tanoa, the Vinivalu (paramount chief) of Bau whom he succeeded in 1852. This was also the year he proclaimed himself Tui Viti (King of Fiji) at the start of a 19-year campaign to unite the islands under his rule. He was successful by 1871 and tried to start a constitutional monarchy, but three years later, with Fiji under threat of seizure by the USA, he ceded sovereignty of the islands to Britain and had no dynastic successors except as Vinivalu of Bau. Fanshawe arrived in Fiji knowing of his fearsome reputation, and immediately invited him aboard 'Daphne' on Sunday 29 September 1849 in order to convey the views he was charged with delivering. To act as interpreter, Thakombau was accompanied by the local Wesleyan missionary, James Calvert (1813-92), to whom he was greatly attached, though he did not himself convert to Christianity and abandon cannibalism until 1854, when he took the additional name Epenisa (Ebeneezer). He greatly impressed Fanshawe, who did a sketch recording his visit that day (see PAI4637) and described him in his journal as over six feet in height and 'the beau-ideal of a savage chief'.

This more formal portrait was done later when he accompanied the 'Daphne's' visit to Rewa, about 2 October, and stayed on board. Fanshawe on this occasion recorded how his guest silently contemplated one of the ship's 32-pounder guns and said with a sigh, 'Ah, England is a full-grown nation': also his more aphoristic remark that 'Christianity and 32-pounders are better than swords and spears and heathenism', both of which suggest Thakombau's grasp of political realities. In respect of the chief's waist garment ['i-oro'] he also noted that the 'most valued present on Fiji was a good length of the fine native tapa-cloth', and that messengers sent to them invariably unwound one brought as a diplomatic gift from round their own waists while giving their message, while the chief in turn wound it round his while giving the reply. Thus 'a chief's momentary wealth can be gauged by the depth of his waist-roll', (p. 236). The fact that Fanshawe's inscription calls the subject 'Tiu Viti' (properly Tui Viti - King of Fiji) also shows that this must have been written after 1852, probably when he assembled the album. The present drawing and PAI4637 were both made when Thakombau was about 34 - the same age as Fanshawe - and may be the earliest portraits of him. The next appears to be one made between September 1854 and February 1857 during Henry Denham's voyage in the 'Herald' , reproduced as frontispiece to vol. 1 of Thomas Williams's 'Fiji and the Fijians' (1859), though photographs were also taken of him in later life. Fanshawe did nine drawings of Fiji and Fijians, including two studies of local weapons, PAI4631- PAI4639.
Back to Search Results
Buy a print License an image
Share:
Link copied to your clipboard!