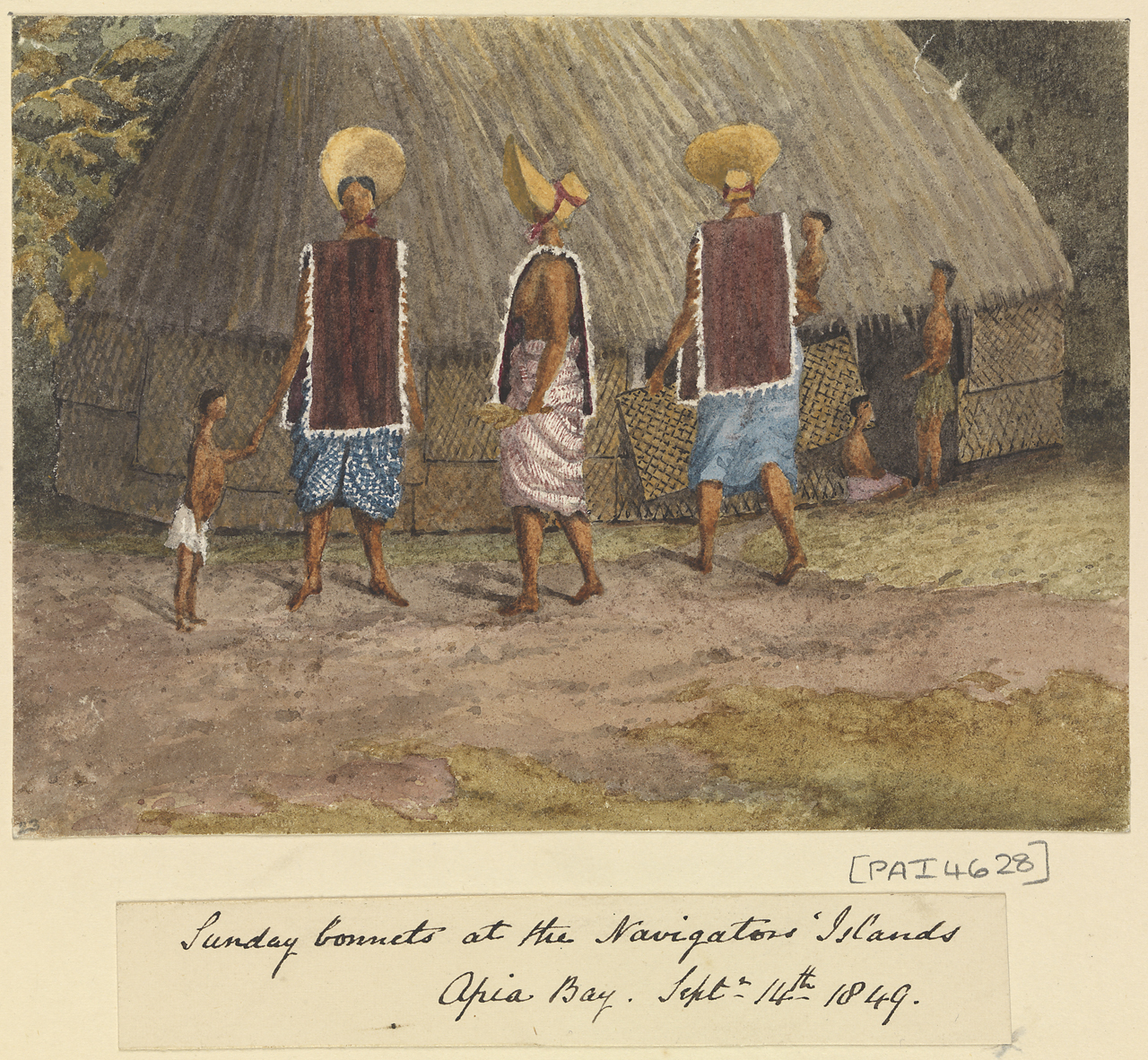 No. 23 in Fanshawe's Pacific album, 1849 - 52. Captioned by the artist on the album page below the image, as title. A group of figures outside a hut, of which the three women who form the main subject drew Fanshawe's interest by the cultural hybrid of their 'Sunday-best' costume. Their poses are also arranged to show a front, back and side view. His 1904 biography explains (pp. 222-23) that the custom of Samoan women twining their hair with flowers was 'graceful and pretty' but 'Unluckily this habit was closely interwoven with their heathen beliefs and practices; so that the missionaries felt it necessary to forbid [it] and prescribe bonnets to those who became Christians. So they made their fine native plaits of vegetable fibre, and carefully copied the missionaries' wives in their headgear [woven from the plaits]. Bonnets, when these ladies left home [i.e. England, years before] were of coalscuttle shape and extra large size; while no change of fashion reached Samoa. The type accordingly endured, and was scrupulously copied. The bonnets were reserved for Sundays and state occasions, when the native ladies also wore extra draperies, consisting of an oblong piece of coloured cloth hanging down from the shoulders in front, and another behind, in the manner of a sandwich-man's boards. The effect was striking, if not altogether artistic and graceful.' The drawing suggests these 'baldrics', covering their normally naked torsos, were probably of tapa cloth, while the pareo skirts below appear to be Western cotton fabric.

Apia was at this time a small village on the north coast of the island of Upolu, Samoa (since 1962 an independent two-island state - the other island being Savai'i). From the 1850s Apia developed as the capital. The whole island group, including American Samoa, was called the Navigators' Islands by Europeans before the 20th century because of Samoans' seafaring skills.

One of four views in Samoa done while Fanshawe commanded the 'Daphne': PAI4628 - PAI4630 were done at or near Apia, on Upolu, in September 1849 and PAI4640 in November, on return there. Only PAI4630 shows Savai'i.
Back to Search Results
Buy a print License an image
Share:
Link copied to your clipboard!